Since the beginning of this year, we've received quite a lot of information about Farming Simulator 22. Studio GIANTS Software, responsible for the next installment of the popular Farming Simulator series, was very reluctant to reveal the exact release date. We learned it only today. According to what the Swiss team announced, its latest work will be released on PC (including Macs), PlayStation 4, PlayStation 5, Xbox One, Xbox Series X/S and Google Stadia on November 22 this year.

By the way, a new trailer of Farming Simulator 22 has also appeared online. You can watch it below.

If you are interested in this title, you can already place pre-orders. The PC version is priced at 39.99 euro.

Each person who decides to pre-order the game will receive the CLAAS XERION SADDLE TRAC Pack for free. It will include several bonus vehicles, including a Fendt 900 Vario and a Massey Ferguson MF 8S tractor.

We'd like to remind that a collector's edition of the game will also go on sale, which, apart from the game itself, will include 24 stickers and a signal lamp with USB connection. More details can be found in this message. 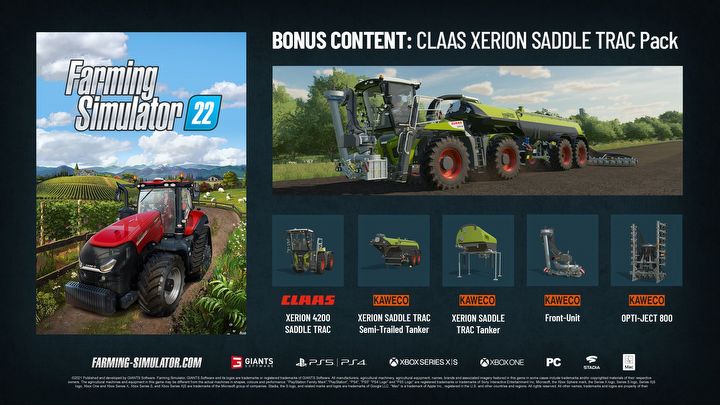 Farming Simulator 22 is to be an exceptional game for several reasons. First of all, it will include a number of new features, such as production chains, dynamic seasons or crop types. Secondly, it will be the first installment to be published independently by GIANTS Software. As Christian Ammann, CEO of the Swiss company, notes, this is a very important milestone for the entire franchise.

More information on Farming Simulator 22 is to be revealed during the upcoming FarmCon event. It will take place on July 21-23.

Real-life Skyrim Charcters According to AI