The activation limit information that appeared on FIFA 22's tab on Steam turned out to be false. According to EA Sports' official position, there will be no such limitation for FIFA 22 on PC:

"We can confirm that there is no limit to the number of activations of FIFA 22 on PC on Steam. This information was incorrect and the limit indication has now been removed. We apologize for the mistake and thank our community for noticing the error."

It looks like PC gamers won't be able to install FIFA 22 on more than one PC. The game's Steam card informs that the game will have an activation limit.

FIFA plaers were already unhappy with the news that the latest installment of the series on PC would not be a true next-gen version as is the case with the PlayStation 5 and Xbox Series X/S. Instead, the PC port will be more like the PlayStation 4 and Xbox One releases - which is certainly a huge disappointment. The 9th-gen console update itself isn't free in every case, either.

As it turns out, the bad news doesn't end there. It seems that the installation of FIFA 22 on PC will only be possible on a single computer. This means that everyone who buys the game will be able to enjoy it only on one, chosen device. 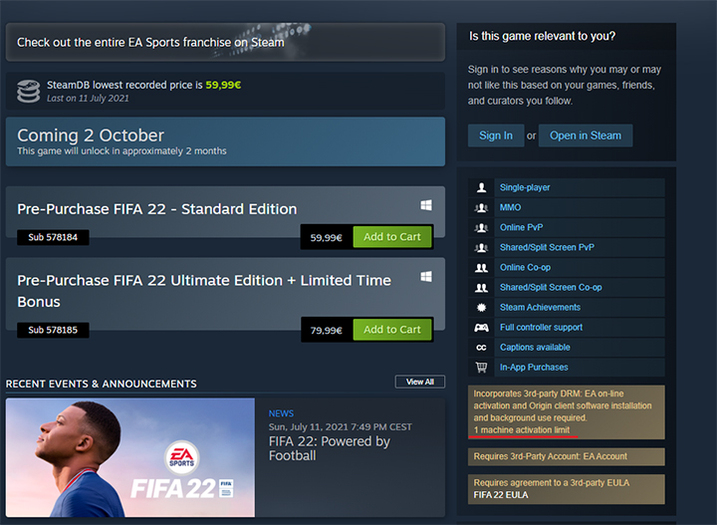 Altchar editors contacted Electronic Arts support for details on the matter - but received no noteworthy information. An EA representative had nothing to add, but referring to the description of FIFA 22 on Steam, he confirmed that the game will have an activation limit.

Disgruntled players have already started flooding the forums with negative comments. Many people can't imagine a situation in which they would have to purchase a new copy of FIFA. Some were also somewhat amused by the whole situation, showing its absurdity in other examples:

"Imagine buying a car at the dealership and accepting a licensing agreement where the manufacturer specifies that the car cannot leave the territory of a single, specified county, you can't sell it on the after market or even loan it to a friend. I forgot - of course you also can't take anyone for a ride, that's forbidden too," writes user winio.

This is another major blow to fans of the series. This decision seems particularly absurd, given that previous games did not have such restriction. The PC version of FIFA 21 could be successfully installed on multiple machines. Let's hope that FIFA 22 will yet follow in the footsteps of its predecessor.

He Revealed Battlefield Portal Months Ago - No One Believed Him

Wave of Protests in WoW After Reports of Harassment and Mobbing