Only hours separate us from the release of God of War Ragnarok. However, industry experts - including our editorial colleague - have had a chance to get acquainted with the title beforehand and give it a well-deserved rating.

Sony's exclusive has been receiving very good, if not outstanding, revierw scores around the world - which is not too surprising (you can read more about it here). However, we all know very well that each person has his own opinion. This was proven by a South Korean reviewer, who decided to give the latest installment of GoW a rating of 6/10.

We've prepared interactive maps for God of War Ragnarok that contain 100% of the game's secrets, collectibles, Nornir chests, Lore, artefacts, or Odin's Ravens. Make sure to check out our original guide and the interactive maps.

Bae Sang Hyun - for that is the name of this bold man - is a person definitely familiar with the world of gamedev. His credits include directing Chasing Light. In addition, he is also a writer, producer and founder of studio Vittgen.

He decided to give such a low rating to Sony's game because, as he stated, the game looks like a standalone DLC for the previous game from 2018. He also argues that the plot of Ragnarok is weak and lacks excitement.

"The design has not changed from the previous part, and the storyline lacks creativity. Unlike its predecessor, which was properly directed as an overall experience, this game resembles a machine composed of soulless modules.

Even if the goal was to safely implement a familiar experience, it could have been porovided in a fresher form. This game resembles a DLC created with little effort," reads the review on IGN Korea.

The threats of fanatics

Interestingly, such criticism acted like a red rag to a bull (in this case, fanatical gamers). Some of them apparently got too carried away, because the author of the review complained on Twitter, that after the publication of the text he became the victim of hating and even death threats. 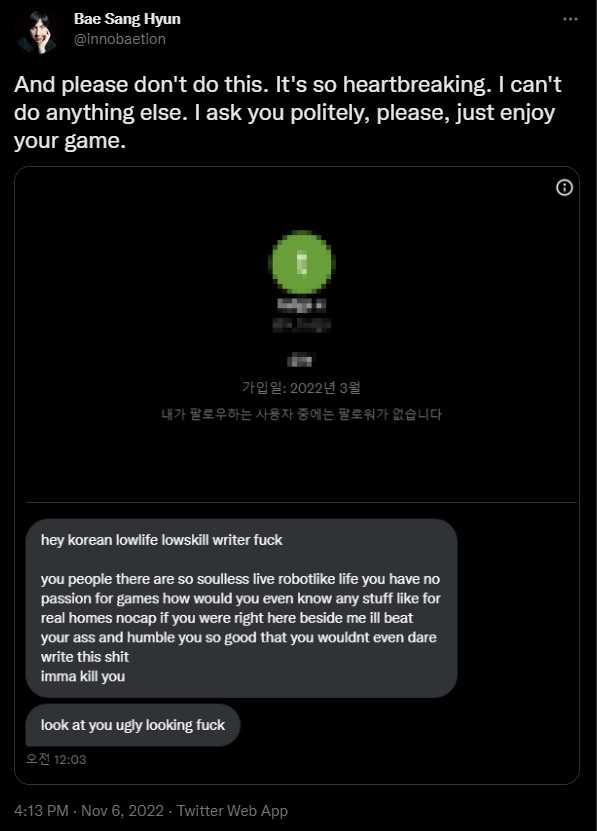 In response to the whole incident the author of the review posted a video from the OhNoItsAlexx channel in the comments section, in which the host criticized fanatical players for their attacks on the journalist. In addition, Sang Hyun defends his opinion and does not intend to change it.

The most bizarre thing about the whole situation is that God of War Ragnarok will only debut on November 9, so most people - including pseudo-fans of the game - have yet to play the game. However, this does not prevent them from threatening a person who has already experienced the title.