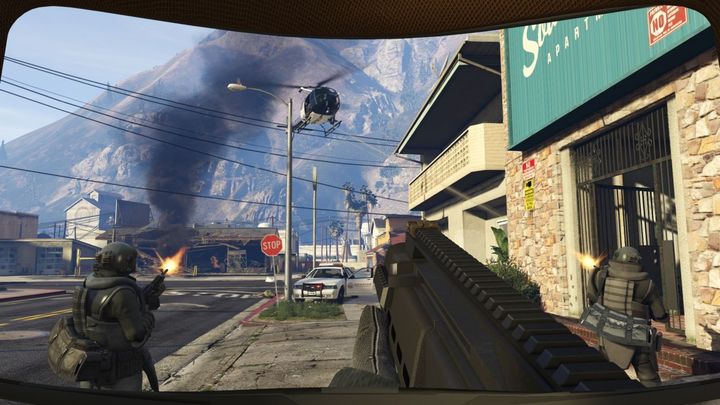 Mod enables us to play through the entire GTA V in VR.

The hit from Rockstar Games - Grand Theft Auto V - received an interesting mod, called R.E.A.L., which enables us to complete the game using virtual reality goggles. The author of the mod, a Reddit user known as LukeRosS00, initially only wanted to usue his Oculus Rift to play the main story missions. Ultimately, however, he spent several months polishing his work and improving its compatibility with the rest of the game.

The modification enables us to play in first person mode and changes the FoV and the way the image is displayed in cut-scenes to minimize the risk of glitches. According to the creator, cut-scenes in VR look even better than during normal game, although from time to time we can still encounter some bugs (this is because when making cut-scenes the developers do not always care about what happens in places where the player is not looking at the moment, and in VR we can freely move our head).

The field of view improvements also include other situations, such as aiming a gun or getting into a car, so that playing GTA V in virtual reality should be more or less problem-free. Moreover, the latest version of the mod also provides support for MSAA, although the developer warns that you will need a powerful graphics card to use this feature in VR.

It is worth noting that this is not the first attempt to port GTA V to virtual reality, but previous projects were not so advanced. The mod works withgoggles compatible with the SteamVR platform (it was prepared for Oculus Rift, but users have also used it seamlessly on other devices - such as HTC Vive). You can download the modification at this address, and below you will find a video showing it in action.