The first microchip designed in 2 nm lithography has been created. It was achieved by IBM's laboratory in Albany, New York - the company announced the success in a message on its website. The fingernail-sized chip can contain up to 50 billion transistors. The new technology could be a major breakthrough thanks to much lower power requirements. Processors made in the 2 nm process should consume 75% less electricity than current 7-nanometer designs. 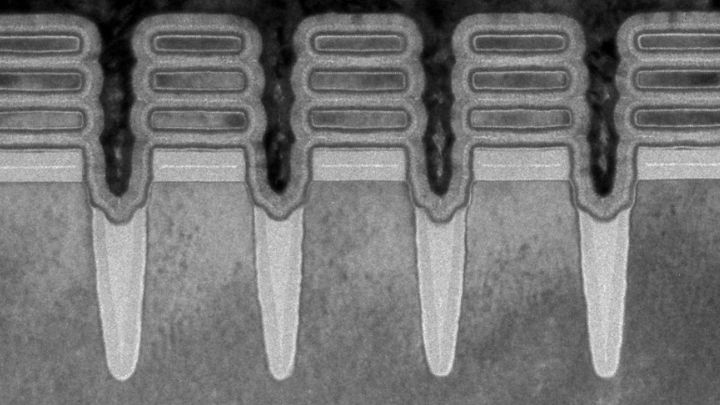 Transistors in the "nano-plate" that IBM uses for 2 nm technology. Source: IBM

With a similar energy consumption, performance can be increased by 45%.. Power gains or increased energy efficiency are desirable features in mobile devices such as smartphones and laptops, as well as in data centers and supercomputers used for AI computing. According to IBM, the 2nm process can quadruple a smartphone's battery life per cycle. For data servers, which account for one percent of global energy consumption, reducing the carbon footprint is also a noteworthy achievement.

"The IBM innovation reflected in this new 2nm chip is essential to the entire semiconductor and IT industry," said Dario Gil, senior vice president and director of research at IBM.

When IBM produced the first 7nm chip in 2017, it was also a kind of breakthrough and novelty. Nowadays, processors in this technology are already in common use, such as the latest Ryzen GPUs from AMD. Will we also have to wait 4 years for 2nm processors this time? Time will tell, but there are already chips in 5nm lithography, such as Snapdragon 888 or Apple M1. TSMC is also working on technologies for producing 2nm chips, as well as 3nm and 4nm. According to the plans of the Taiwanese manufacturer, processors produced in the last two lithographies can be ready in 2022.