One of the hottest topics this week has been a potential TV adaptation of the Mass Effect franchise, which Amazon Prime Video is said to be preparing. David Gaider, the former scriptwriter of Dragon Age spoke negatively about the idea. However, it turns out that his opinion is not shared by all BioWare veterans. Screenwriter and composer for the Mass Effect trilogy are not only excited about the prospect of a TV adaptation, but would also like to be involved in it.

We're talking about two veterans of the series. Drew Karpyshyn was the main scriptwriter of the first Mass Effect and Mass Effect 2. He also wrote three novels set in the universe of - Mass Effect: Revelation, Mass Effect: Ascension and Mass Effect: Retribution. On Twitter, he commented on reports of a TV adaptation, stating that he is not involved in it at the moment, but he is excited about the project and would be happy to be consulted on its creation. 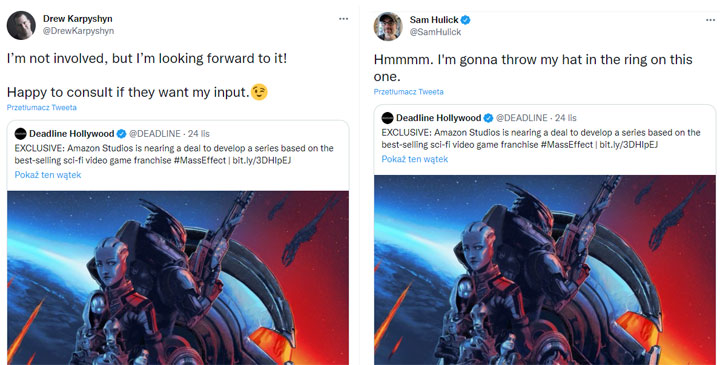 Drew Karpyshyn has also spoken positively about the idea of adapting his books. It would make sense, since the first of them, Mass Effect: Revelation serves as a prequel to the games.

The second veteran is Sam Hulick, who was one of the composers for the Mass Effect trilogy. He also expressed his desire to work on the TV adaptation of the franchise.

It is worth noting that people who were associated with the series have spoken positively about the potential adaptation of Mass Effect from the beginning. David Gaider, who criticizes the idea, did not work on the franchise - he spent his entire career at BioWare, dealing mainly with various fantasy games, including Dragon Age, Baldur's Gate and Neverwinter Nights.

The creation of the show is not certain yet. Reliable reports say only that Amazon's talks with the owner of the rights to the franchise, Electronic Arts, are in the final stretch.

Tides of Avarice Expansion And Patch 5.00 for X4 Announced

Marvel MMORPG in the Pipeline; I.G.I. Origins Later Than Expected

Housemarque May be Working on a DLC for Returnal

Tides of Avarice Expansion And Patch 5.00 for X4 Announced