As reported yesterday, Amazon is on the verge of launching a TV series adaptation of the Mass Effect franchise. David Gaider, lead writer of Dragon Age, who left BioWare in January 2016, expressed his concerns about the project on Twitter: 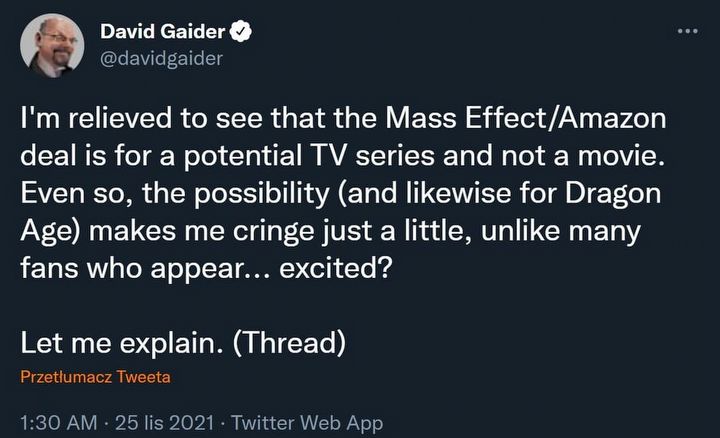 Gaider expanded on the thought in further posts. For starters, he pointed out that the Mass Effect series (as well as Dragon Age) has a wizard where players can create their own character, starting with the choice of gender. Thus, the creators of a potential TV series will have to decide top-down whether their Shepard will be male or female. As a result, many fans may feel distanced from the adaptation because of the different version of Shepard than the one they grew to love in the original trilogy.

Additionally, Gaider emphasizes that ME's protagonist was designed in such a way that at the beginning he was - as he put it - "empty". Only the player, along with making subsequent decisions, determines what kind of person his or her Shepard is. In the adaptation, however, the creators will have to impose a specific personality on the character. 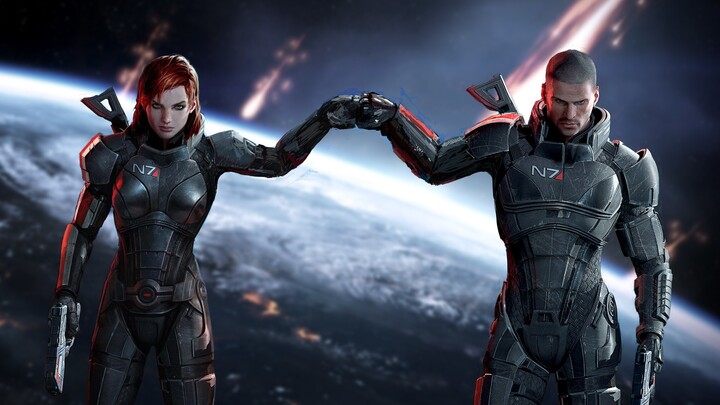 I think the creators of the adaptation - once the gender has been determined - should stick to the default (as seen on the game covers) Shepard appearance templates. It would probably be the least invasive solution.

Gaider is also concerned about the companions. There is very little chance that the TV series will give each of their game counterparts an equal amount of screen time. Looking at how attached to them the ME community is, many may feel disappointed by the potential "omission" or "cheapening" of their favorite characters.. Add to this the dissatisfaction that may manifest when it turns out that the object of TV Shepard's feelings will be different than ours...

"Those plots had to take into account the player's agency. They were kind of the shell upon which that player's emotional engagement was delivered -- usually through the companions and the choices themselves. Choice heightened engagement. Interactivity was the star, not the plot.

Take all that out, lose most of the companions, and you potentially end up with... a pretty run-of-the-mill fantasy or science-fiction show, one where a lot of the built-in audience has possibly been turned into outraged, howling malcontents before it's even released."

Most likely, the creators of the TV series would not have to face the above problems, if they decided on a separate story set in the ME universe and not a faithful adaptation of the trilogy (maybe setting it around the events from ME: Andromeda?). However, Gaider points out that from the perspective of the creators of the TV series the project would be directed not only to fans but also to a wider audience, not familiar with the games.

Thus, the adaptation at some point would have to finally answer the question "what is Mass Effect?", and that means creating something that is "recognizably" Mass Effect. The storyline of Normandy's crew and the fight against the Reapers encapsulates the essence of the series, which is why it seems like the best choice for an adaptation. Gaider concluded his speech by saying:

"All that is, of course, if the DA or ME series is mishandled. I can think of any number of ways it could be done better... but that involves doing more than a strict adaptation, and that comes with its own complications.

Anyhow, good luck to the showrunners. They'll need it!"

GPUs Are in Short Supply but Nvidia's Sales Increase

Ton of New Stuff Coming to The Riftbreaker