We all breathe the same air. We all cherish our children’s future. And we are all mortal.

I return to Star Citizen quite regularly with each major update and I must admit that in July, after the release of version 3.17, for the first time ever I didn't feel the urge to immediately uninstall this game after an hour. The stability has improved, and most of the critical bugs that prevented the gameplay can be bypassed in one way or another, which, unfortunately, doesn't mean that I had much more fun in the game this time around. To the contrary: it's difficult for me to grasp the essence of Star Citizen, if it exists at all, because at times, my blood was boiling.

An excursion for space burrito

Star Citizen stands at the crossroads between Chris Robert's GREAT vision and the fact that the game is still only available in the shape of a bug-ridden alpha. Interestingly, when said vision comes to the surface, I find it more discouraging than the bugs. In Star Citizen, we are literally a star citizen, who spends most of their time on performing trivial activities, such as riding space trains, looking for hot dogs and soda, finding weapons and armor stores, waiting for 10 minutes for a damaged ship to recover (this can be skipped... by coughing up in-game currency). It's a hard life; no jokes, no food delivery services.

The world of Star Citizen depicts humanity that has gone into space to build shopping malls and fast food chains, all the while convinced that cheap labor is better than robotization. Therefore, it is the player who often has to carry loads, which they will soon also be able to push on carts, just like in a DIY store. 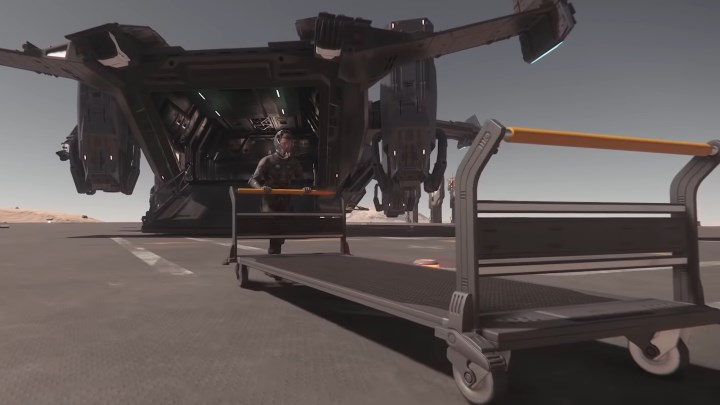 Imagine this: you have already devoted 15-20 minutes to buying the necessary equipment, your ship is ready to go and carry out the mission. However, the risks of crashing during take-off and losing another few minutes to repeat the steps above is quite high. Taking off and landing in this game can be extremely dicey, and it's easy to blow yourself up by bumping into fragments of the hangar. There's also that huge bug which makes a block appear in front of the ship.

This big holiday gift has one more important element – animations that enhance immersion. Our character takes the sit ever so slowly in the wonderful pilot's chair, which rolls our at a snail's pace, and part of the getting out of bed routine seems to be thorough examination of whether they still have their arms and legs, proceeded by stretching, even though we just spent a few seconds in the bed – in order to avoid the bug that makes the avatar clip through the floor of our ship.

There are not enough activities available here, too – we can do courier tasks, loot wrecks, play bounty hunter and hunt down AI or players, or clear out bunkers on planets. The most interesting mode are time-limited events set up by the developers from time to time, during which players have to fight a common threat.

Sometimes during a mission, everything goes smoothly – we land, find a corpse in the wreckage, mission completed; profit. Other times, however, we go where we weren't supposed to, and fall below the map textures. Basically, it's mobile-game level of quest design – I know it, because I've done this kind of thing myself. A short storyline, two triggers, an object to salvage on a planet... the so-called "content."

People loved the classic space simulators because they had a simple flight model that provided WW2-type air combat, only in space and with lasers. Star Citizen , like Elite, decided to opt for more realism. Both of these games utilize what's called the Newtonian flight model, so we can turn off the assists and drift in the desired direction, rotating around the ship's horizontal axis. In case of the half-billion dollar production of Cloud Imperium Games, however, there is a lack of stimuli that would telegraph the ship's status to the player, the sounds are quite weak and the voice of the on-board computer doesn't notify us when we enable or disable the coupled mode. The effect is that, I often got confused and crashed into an enemy ship – a situation I was easily able to avoid in Elite.

I am always surprised that the controls configuration using a HOTAS kit in Star Citizen is more cumbersome than in the "simulators of Russian origin," such as DCS or Il-2, where it was easy to check what key was responsible for which action – by simply pressing it. Here, we have lists to expand and dig through, and some functions, such as inversion, are explained on a completely different tab. It's worth considering regular gameplay using a mouse and keyboard, or a game pad.

Let's go back to the ground for a moment, specifically below it, to those infamous bunkers, missions in which you have to kill a given amount of enemies in an underground complex. If the survival elements in Star Citizen are the effect of DayZ's influence, then bunkers missions have all the seeming of Escape from Tarkov – loot, bots, occasional other players, risks, reward and all that jazz. What it also is, unfortunately, is just a mindless shooter with lagging, jerking animations of enemies. In my case, as in many others, the experience ended because I confused a guard with an enemy, and shot them – which made me a criminal in the game world. This meant, among other things, that my ship, with all its contents, was wiped out by watchtowers that were all nice and friendly just moments earlier.

Being a criminal involves buying hacker cryptocurrencies, flying to space stations and hacking, or serving a sentence in a virtual prison. There's also one more option for people who have not gained anything meaningful in this game anyway – reset the account to the initial state on the dev's website. 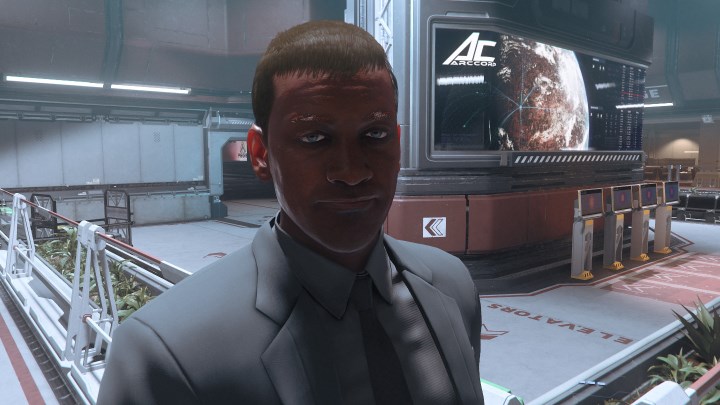 There are times in Star Citizen when you want to keep playing – there are lots of ships that you can buy without spending real money, lots of armors and guns. The game has these beautiful moments when our vehicle touches down against the setting sun or when we're flying low over a desert planet, setting off whirls of dust below. You can see that, unlike in the case of GTA 6 for example, it were the graphics that the studio has prioritized in the early stages of development. By 2022, however, it is already clear that some elements of the visual design are beginning to lag behind, most notably the heinous and crude character models that look like a cybernetic merge of Elon Musk and Mark Zuckerberg, regardless of how much effort you put into character wizard wizardry.

Will Mark Hamill live long enough to see the release of Squadron 42?

This is how we get to the last point of the program, and in fact my biggest objection to the entire Star Citizen circus – this is a game of the generation, but not in a that way anyone wished. Even if people doubted that it would launch in 2016, they probably hoped for a substitute in the shape of Squadron 42 – I must admit that I was one of those people. Meanwhile, after numerous waves of a global pandemic, Russian invasion of Ukraine, and a few other calamities that took place, backers have no guarantee that they'll ever see SQ42 or a de-wormed version of Star Citizen. There are people in the community who are genuinely considering including their SC accounts in their testaments. Interesting fact – the first time I've published a bigger material on Star Citizen was in 2014. Another one in 2017. Both with people who have since moved from our editorial staff. I wonder how many more people will I meet in my life before ver. 1.0 is released?

Thus, the game from Chris Roberts and Cloud Imperium Games turned out to be too time-consuming and frustrating for me. Now sorry, I should go be an Earth citizen.

Assassin's Creed Shows the Way for The Division and Rainbow Six