TESRenewal group is working on mod for The Elder Scrolls V: Skyrim called Skyblivion. Thanks to it we will be able to see the province of Cyrodiil in quality offered by the newer part of the saga. The task is not easy - the modders intend to remaster the entire content of The Elder Scrolls IV: Oblivion, including DLCs. The creators have published a video showing work progress on the project, new 3D models and completed areas, as well as playthrough of one of the already completed missions.

Eight years after work began on the mod, TESRenewal describes their progress as "phase one complete" for the outdoor areas. These will now be subject to fine-tuning and bug fixing. The team is also reconstructing all the indoor areas, 2663 of which were featured im the original game, as well as caves and dungeons. Dungeons are to be more diverse, contain more unique elements. The creators of the mod go a step further and add their own content. TESRenewal creates it, based on NPCs' stories and the content of books from the original game (as we can see in the video).

The most notable thing is a showcase of the modded game in action, namely completing a quest that requires us to slaughter goblins in a mine. While admiring the running fragment, we can see the redesigned interface, as well as the ability to fight underwater. Even a characteristic feature of the games of this saga, namely somewhat stiff animations, has been preserved. As for technical aspects - the mod is to have 8032 3D objects, often more detailed than in the basic version of Skyrim, and textures in resolutions of up to 4K. At the current stage of work, this is how the developers define the hardware needed to run Skyblivion:

"If you can run Skyrim on medium settings, you should be able to run Skyblivion".

Judging by those words, we can expect the requirements to be a bit higher than the base version of Skyrim, but given that we're 9 years after the game's release, most PCs should have no problem with it. The creators assure how important to them is also the optimization of the title. However, they cannot confirm any release date. Although this is nothing unusual in the case of community projects, which sometimes are not finished at all. 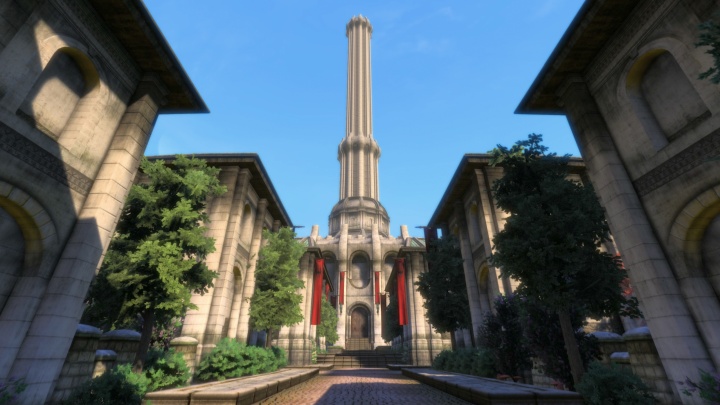 The famous White-Gold Tower in Imperial City, recreated in Skyblivion.

The published footage suggests that work on Skyblivion is proceeding at a steady pace and producing results, which gives hope for a successful completion in this case. The mod is to be free and available only on PC. It will require us to own, apart from Skyrim of course, the original version of TES IV: Oblivion, as well as all the major DLCs for both games (listed on the project website). It's worth following the official Skyblivion account on Twitter.