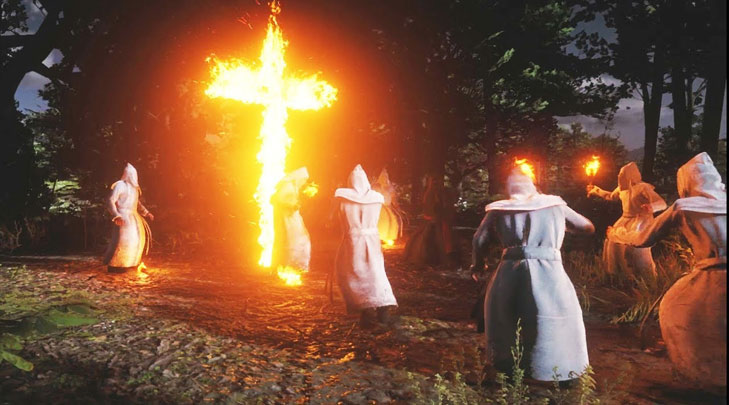 The Ku Klux Klan only appears in the campaign, but players have found a way to spawn these models in Red Dead Online.

Rockstar Games blocked the possibility of summoning members of Ku Klux Klan in Red Dead Online, the online module of Red Dead Redemption 2. The characters were introduced to the multiplayer using cheats and mods.

Normally KKK does not appear in Red Dead Online. However, this group is present in RDR2's campaign. By means of mods, players are able to spawn practically all assets from the single player mode in the multiplayer. Some users have used these tools to summon racists dressed in white hoods. In recent weeks many people have reported that their characters are getting attacked by Ku Klux Klan groups in the game, led by both AI and other players.

Rockstar Games usually reacts slowly to problems in their games, but this time it was different and the studio quickly introduced changes that make it impossible to spawn KKK members. This was done in an interesting way. The game first detects whether we are in multiplayer mode, and then monitors the events that generate objects and characters. If one of the models with a white hood is spawned, it is immediately deleted. In this way, devs can avoid problems in single-player and not limit the less controversial creativity of users.

There is no shortage of people who think there are more important things developers should pay attention to, such as the introduction of private lobbies (which would greatly help with all the cheaters) or the improvement of the overall technical condition of Red Dead Online. However, it's hard to hold a grudge against the priorities of Rockstar Games. KKK gangs raging on servers could become a PR nightmare for the studio, especially given the current protests related to the Black Lives Matter movement. In early June, the studio shut down their game servers for two hours to commemorate George Floyd, so the team is sensitive to such issues.