Today, Rebellion announced the release date of the first story-based DLC for their most recent open-world shooter Sniper Elite 4. Sniper Elite 4 Deathstorm Part 1: Inception is coming to PC, Xbox One, and PlayStation 4 on March 21, 2017, as the opening chapter of a three part mini-campaign, set after the events in the original game. After having helped liberate the southern part of Italy, Karl Fairburne heads to the icy northern regions the country, to a recently bombarded Nazi naval base. His job is to finish what the bombing run started as well as retrieve a critical package codenamed Deathstorm. The whole campaign will be playable in co-op mode for two players. 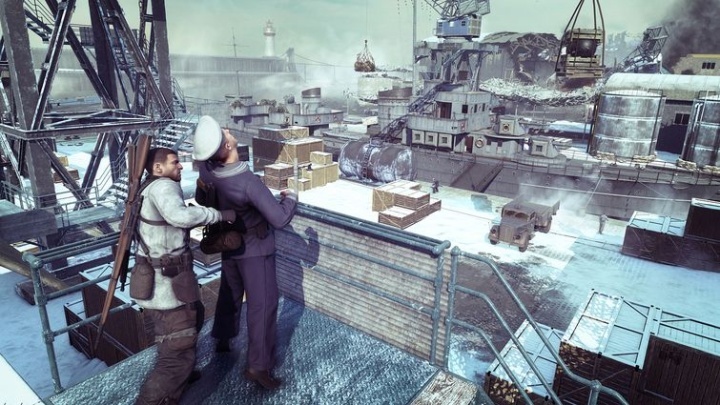 Karl is going to leave the sunny Italian coastline behind and head north.

Along with Deathstorm Part 1: Inception comes Night Fighter Expansion Pack, i.e. a collection of three new weapons, night-time camos for eight rifles, and male and female characters skins. Apart from that paid content, there will also be a free game mode called Elimination, available on the same day. Here is the mode’s description as taken from the official press note:

This two-team mode for up to 12 players is all about trying to whittle down your opponent's numbers. If you kill an enemy player, they're forced to sit out on the sidelines. But if their team kills one of your teammates, they tag back in one of their sidelined comrades. In Elimination, all is not lost, even when you're 1 v 6.

On top of that, all players will receive a free multiplayer map, Night Woods. Rebellion took that opportunity to remind the fans that all future maps and modes are going to be released for free.

This is the end for PlayStation 3

This is the end for PlayStation 3