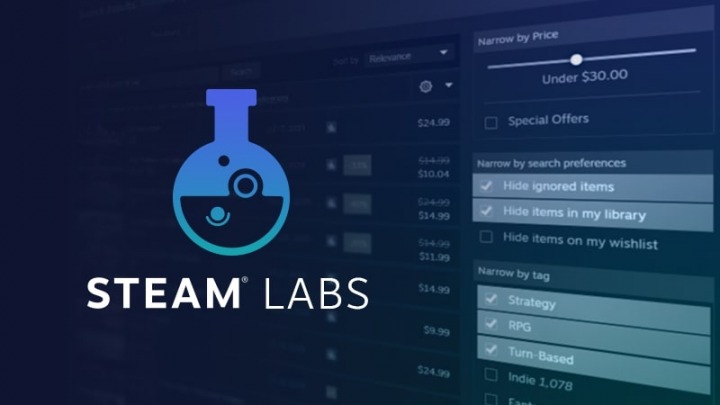 Steam Labs is a really interesting place - we recommend to take a look there!

Steam Labs is a site where Valve provides tested upgrades to be implemented in Steam. For some time now, an American corporation has been investing in artificial intelligence. It is used, e.g. to catch cheaters in Counter-Strike: Global Offensive. In July we wrote about the launch of the Steam Labs initiative, and with it the Interactive Recommender project. The system wasn't very extensive, it recommended productions based on title tags of games that we had already played before. However, it did not recommend games from the library, but encouraged to buy more from the Steam shop. We could additionally configure the generated lists, indicating which products we are looking for - popular or niche and how old the recommended game should be.

The experiment called "Another Game" will suggest the next production (with the help of the machine learning system, which is still being developed), which we can look into. The system chooses titles that we already have in our library, but we haven't played them yet. After logging in to the website, it will automatically show us 3 suggestions, and when we hover over them with the cursor, we will see a short trailer. If we do not find anything interesting on the first page, you can click the "Show more" button. The AI will present up to 12 titles. In addition, we can indicate on Steam that we have either already played a game on another platform, or the system is to ignore it and not recommend it in the future.

It's certainly an interesting way to attract players to games that accumulate on lists of owned games (let's not hide, everyone has a lot of them). Why search the Steam shop for noveltues, when you can play interesting, already purchased titles. So far it is only a concept of the creators; we will see what the future brings and whether the system will be permanently implemented.

You Can Bid For The Prototype of Nintendo PlayStation