Terraria is one of the biggest indie hits, which has sold over 12 million copies to date  this information was revealed at the beginning of the latest trailer (you can see it below). The creators are not taking this success for granted, however, and are further developing the popular title. Yesterday we received a new update marked 1.3. It is available for PC and introduces a number of new elements, which you can read about here. Among the most important new features we can find new sprites and backgrounds. In the Expert Mode bosses and some enemies have better AI, in the case of death we lose 75% of our gold, and we wait longer for respawn during boss fights. These are just a few examples, as the complete list of implemented changes is a really long read. Below you can find our selection.

Terraria 1.3 update in a nutshell: 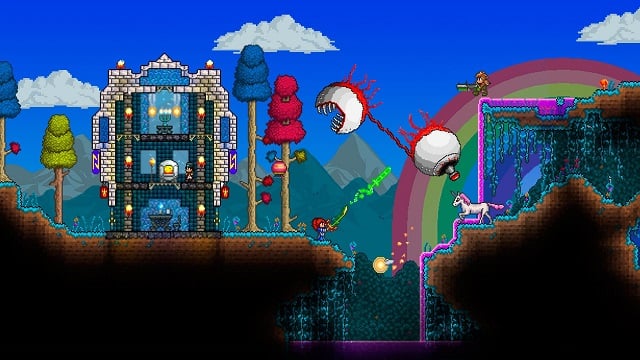 In Terraria we have to face a variety of obstacles.

Terraria is an action adventure game that is best described as a two-dimensional Minecraft. Players are introduced to a randomly generated world where they can do all kinds of things. First of all, we have to make sure that we have all the raw materials needed to build sophisticated constructions and craft equipment that is useful during exploration and combat with opponents who cross our path.

The title launched in 2011 on personal computers, but since then received many other editions. Now, owners of the majority of current hardware platforms  from home consoles to mobile devices  can enjoy the game as well.