Fans of Cyberpunk 2077 are once again showing their creativity. Virtual Car Dealer introduces an online car store to the game, thanks to which V can buy a vehicle using the PC in their apartments.

How does the mod work?

The mod does not add much to the game. In the aforementioned store we can buy cars available in Cyberpunk 2077 and modify their colors.

This is a significant improvement in comparison to waiting for an offer from the dealer or "indefinitely borrowing" a car from the street.

DJ_Kovrik, the mod's author, has also included a basic package of cars that players don't normally have access to. So by using the VCD you gain access not only to the standard market, but also some new car models.

Furthermore, the creator of the mod has shared a guide for other modders who would like their projects to be compatible with Virtual Car Dealer. 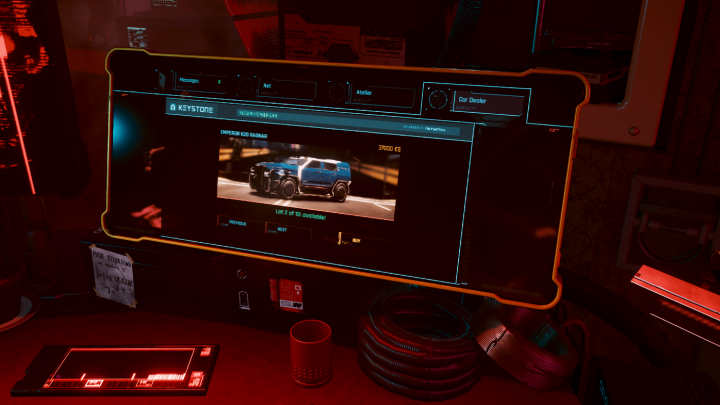 This is how the mod looks like in the game. Source: Nexus Mods.

It is worth mentioning that after purchasing a car in the Car Dealer tab, you will be able to test your new toy by summoning it using your phone - just like other cars in Cyberpunk.

The modding community of Cyberpunk can not complain about the lack of praise. This time is no different, players unanimously praise DJ_Kovrik for his latest work.

The "mod" bingo concerning the game of CD Projekt Red also includes the mention that such an option should have been present in the game from the very beginning.

"This mod is great. I hope CDPR will notice it and introduce it to the basic version of the game (paying the original creator in return, of course). It looks a lot better than the fixers that plague the player or exploring all over Night City just to get some car. I also don't think it [implementing the mod's features - ed. note] requires them [the developers - ed. note] to go to great lengths to rework entire aspects of the game," wrote adrielzeppeli on Reddit.

[...] "it saddens me that a AAA open-world RPG didn't have the ability to modify cars from the start," wrote capybaranaranja.

Finally, it is worth mentioning that the principle of the online store is also used by the Virtual Atelier mod by Pacings. The difference here is that Atelier revolves around clothing and is mainly used by modders who want to bring their designs into Cyberpunk. Players, on the other hand, have a preview of the clothes they can purchase in the store.