Cyberpunk 2077 has just turned one year old. In CD Projekt RED, nobody will open champagne for this occasion – unless the toast is raised to the game's great sales and the growing number of positive reviews on Steam, rather than its poor start and slow patching. Either way, it's a good time to get some closure, though things are still bound to change. Before we get into them, however, I would like to look at an issue that regularly crosses my mind – elements from The Witcher 3: Wild Hunt featured in the "yellow game".

Much has been said and written about the latest production of CDPR. I will limit myself to mentioning the fact that it was not a model creative process – it took a long time, the concept changed many times, and rampant marketing did not help. We felt the effects on the day of Cyberpunk 2077's release dominated by technical problems, and in the months that followed, the problems became even more pronounced. It was often possible to catch developers cheating – basically copying ready-made solutions from their previous game, and implementing them with some minor changes.

And just as a slacker mindlessly copies the answers of the school's top student, CD Projekt RED decided to cut corners. Instead of designing the game from scratch, the developers did some sort of a transplant. As it quickly turned out – with limited success. What worked in The Witcher 3 did not necessarily work for Cyberpunk 2077. What exactly are we talking about? Five such elements come to my mind.

Memorable, small stories... Where are you? 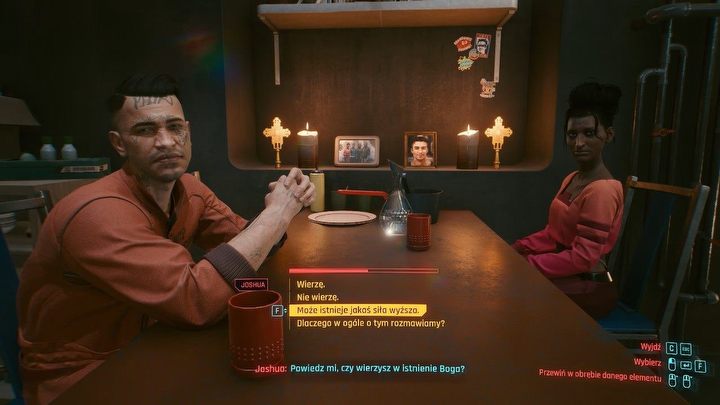 Probably the only really good side quest in Cyberpunk 2077.

The first one are poor side quests. When you ignore the gigs, which were mostly just empty checkboxes, there are much fewer of these in Cyberpunk 2077 than there were in The Witcher 3, and worse still – they're not memorable. And I don't mean the storylines of Panam, Judy, Johnny, Kerry or River – these are okay, same as the story of the Bloody Baron, solving the mystery of the Tower or choosing the king or queen of Skellige in the Wild Hunt. These quests had similar impact on the main story; we didn't have to finish neither to see the game through.

But the prosaic missions like A Frying Pan, Spick and Span (which had a hidden twist), the Shock Therapy (poor druid...), or the Forefathers' Eve (which quotes the poet Adam Mickiewicz) well all engrossing, small, self-contained stories. These are gems – with delightful atmosphere, striking emotional chords, or mocking some stereotypes. Cyberpunk simply doesn't have them. Yes, you can find interesting missions that bring something new to the table, and there will be some feels. The Joshua Stephenson quest is a good example of such a quest. Others are harder to find. Killing in the Name? Lots of pointless running. Delamain? Memorable, but not necessarily for good reasons. Burning Desire? Come on...

Moreover, these quests are basically not related to each other; they have no effect on anything except V's Eddies and XP. They imitate quests that let you get to know the plot, but in fact tell completely insulated stories. Don't get me wrong – they are fun to do... But in The Witcher 3, side quests were more than question marks to check off.

Just take the White Orchard, the location where the prologue takes place. We learn the basics of witcher contracts, kill the griffin, find Yennefer and chase Ciri. However, nothing prevents you from getting to know the history of the village.

You begin by taking a contract – as befits a purebred witcher – the Devil by the Well. After claiming the reward for getting rid of the wrath, I wanted to know more about the woman she used to be, her home, and the reasons behind her actions. The answers were given to me by Tomira, a local herbalist. While tracking the griffin, we also met the hunter Mislav, who shed new light on the story.

I think you get the point – the world in The Witcher was simply more intertwined and organic. These quests were not as detached from each other as they might seem. They overlap, together presenting the history of the area, which we only get to know in full after connecting all the dots. Unfortunately, we will not experience something like that in Cyberpunk 2077. It is a pity, because every district of Night City asks for similar exposition.