We learned the system requirements of The Settlers: New Allies, the next installment of the popular strategy game series from Blue Byte. They were published on the game's product card on Epic Games Store.

The Settlers: New Allies is heading exclusively for PC. The game will be released on February 17 this year.

For now, the game is sold in Epic Games Store and Ubisoft Store. However, for the past few weeks, Ubisoft's works have been making a gradual comeback on Steam, so the addition of the game should only be a matter of time. 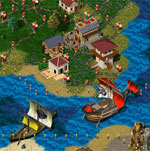 While waiting for The Settlers: New Allies, it's worth checking out the free Widelands.

It's a free open-source strategy game designed to expand on ideas from the iconic The Settlers II.

Widelands recently received its first new version in more than a dozen months, numbered 1.1. The patch introduced three new scenarios, improved the appearance of units and added a diplomacy system. In addition, AI and engine performance were heavily improved.

Skellige in The Witcher 3 With HD Reworked NextGen