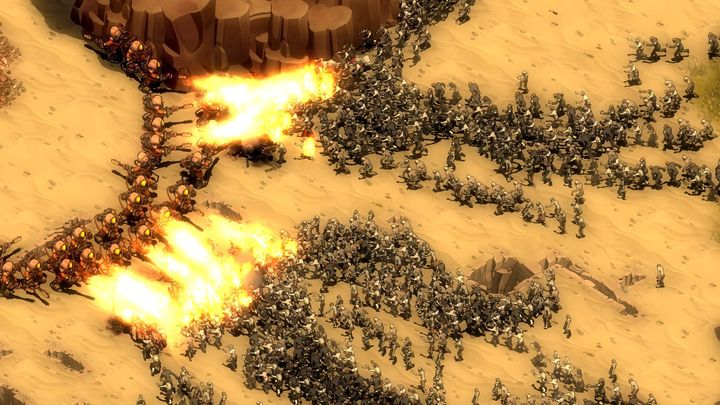 First improvements to the story mode of They Are Billions.

Last week, Numantian Games' strategy game They Are Billions left Steam's Early Access program and received a very extensive story campaign, The New Empire. Unfortunately, the new mode did not appeal to some players. The developers seem to have come to the conclusion that the reason is an overly high level of difficulty, as they have decided to make a few changes in this field in the next update. Details are described in a special note on Steam.

The launch week is becoming really intense. We never thought that version 1.0 would generate so much interest, opinions and feedback. Thats a sign that They Are Billions is becoming a very popular game and, as such, generates intense debate. (...) We have to say that we are saddened to see that many players with hundreds of hours of play in Survival mode have written very negative reviews for the launch of the Campaign.

Here we made a mistake when leaving the Challenging mode as the default difficulty level. In addition, many players havent noticed the small screen of difficulty level that appears on the Missions screen and are not aware that you can change the level of difficulty at any time. Now the default mode is Accessible, which maintains a good level of challenge and is more progressive than the Challenging. Also, now when playing the first mission you will see the difficulty window explaining this functionality. (...) The general difficulty of the first missions has been lowered a bit so that it is something more accessible, especially for first-time players, reads the note.

In addition, it was decided to eliminate time constraints for some missions (mainly at the beginning of the campaign). The ones that are still in the game have been extended and will be much better signalled, so that players will be aware of them and can take them into account in their strategy.

Will the modifications made by developers improve the reception of the campaign? Perhaps so, but it is worth noting that critical opinions generally do not focus on this issue, even if it is raised in them. There are many more problems - the comments mention, among others, a very high repetitiveness of the missions, locations copied from the Survival mode or a very weak plot, of which there is so little that it can be considered negligible.

I´m at 50% of the campaign and there is almost no story at all. The ruler of ur city says you shall go out and kill zombies and build cities. Sometimes there comes a short video sequence where he says you are doing fine or that he is still skeptical. Besides that you can find journals where they explain how the plague began which is very nice. But that´s it. 50%. Not much of a story," writes user Jens in his Steam review.

I've been with this game from the beginning, Survival gave me a lot of fun and I've mastered it. The campaign was something I've been looking forward to for two years. They really could have done it very nicely. What did we get? A dozen or so maps from the Survival mode, each with the same goal: build a base from scratch, get a population level of x, kill zombies. Really? Is that supposed to be playable? After all, we've all been doing just that for two years in beta version. Talk about dryasdust; for a seasond player it gets boring after the first map. Playing this is a chore. Was that your goal? Making some easy money? It's not even a joke, it's just insolence," writes git.bejbe.

For the time being They Are Billions is available only on PC. Next month the game will also debut on PlayStation 4 and Xbox One.