In light of yesterday's announcement regarding another delay concerning the release of Skull and Bones and the cancellation of three unannounced projects, the entire Internet has been consumed by discussion of the current state of Ubisoft and the future of the French company. This is a good time to analyze the various aspects and present the broader context of this event.

The current public discourse follows closely on the heels of the statement issued yesterday, approximating the hopes and concerns of Ubisoft members. In it we find, among other things, a statement from the studio's co-founder and CEO Yves Guillemot:

"We make no secret of our disappointment with our recent results. We are confronted with contrasting market dynamics at a time when the industry continues to move toward mega-brands and endless games - against the backdrop of a deteriorating economic situation affecting consumer spending."

This opinion apparently coincides with the new strategy chosen by the French developer and publisher. According to it, canceled projects would have little chance of succeeding in a world dominated by a few of the best-known titles and their sequels.

At the same time, the popularity of games that offer thousands of hours of fun and years of support for a one-time or even no payment has been noted. Titles with a limited story line and not-so-expansive gameplay are unable to offer a similar level of experience. They simply offer a lot less fun for the same or higher price, which these days turns the average gamer off from buying them.

More than 100 million euros difference between planned and achieved earnings is an indisputable proof of the scale of Ubisoft's problem.

The published results have translated into the brand's condition on the stock market. Share prices dipped - they suffered a decline of almost 66% from 2018. Thus, they reached the lowest value in the last 7 years. 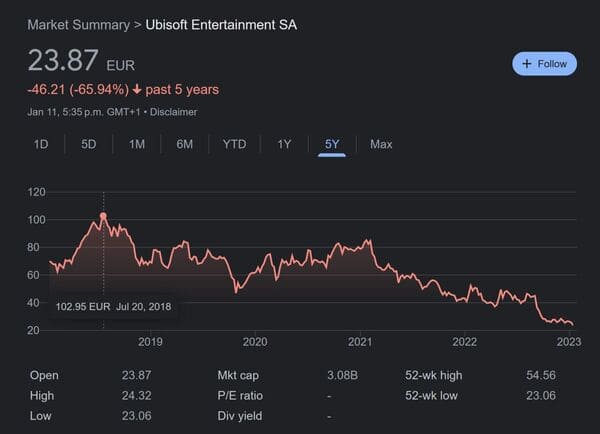 Looking at the charts showing share prices in real time, it can also be deduced that yesterday's announcement worried the investors, as it resulted in a 13.79% drop in stock prices.

Irresponsible spending and clear plans to save money

Not hiding the company's poor financial condition, Ubisoft's statement also includes information about losses related to cancelled projects. As much as 500 million euros were said to have been devoted to work on the three titles that will never see the light of day.

In response to the declines, it is natural that Ubisoft intends to cut spending. The €200 million in savings over 2 years announced yesterday does not seem overly ambitious, but it may raise serious questions. Does this mean the wave of layoffs so typical of the game industry? Stephen Totilo, a journalist for Axios, argues against it:

"A Ubisoft representative told me that developers working on the now-cancelled games will be transferred to other projects. The company is trying to avoid large waves of layoffs, even if, as at the moment, it is anxious to reduce its workforce. This has to do with regional tax breaks."

Ubisoft also assures that the planned savings will be achieved by restructuring and abandoning some unnecessary assets and by not replacing departing employees on their own.

Alleged merger attempts with other companies and rejected purchase proposals

In its current state, Ubisoft would undoubtedly benefit from joining forces with a better-performing business partner. Journalist Jeff Grubb, one of the game industry's most trusted insiders, says that unsuccessful attempts to save the company in this way have already taken place:

"Ubisoft has already proposed acquisitions or mergers to other similar companies and has been mostly ridiculed. It is simply inefficient. Its advantage was a diversified development structure, which is now just a curse."

What's noteworthy is that in September 2022 we learned of Tencent's investment in Ubisoft. 200 million euros in shares and 100 million euros in capital gave the Chinese giant a 49.9% economic stake and 5% voting rights in topics relevant to the company's development.

Despite the seemingly endless list of problems that the French publisher has to face, we shouldn't expect the company to close down just yet. 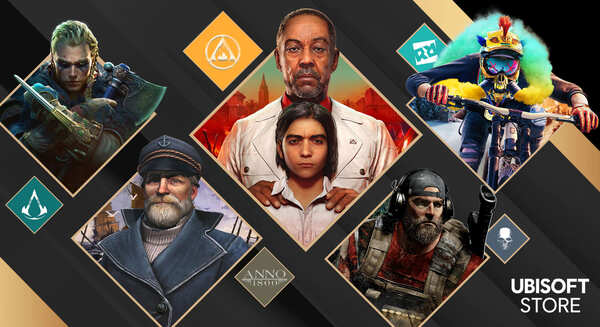 In addition to the three canceled games Ubisoft is said to be keeping secret one more "big" title that has not been canceled and is expected to debut in late 2023 or early 2024. If all goes according to plan, it will be released at the turn of the next few months together with Assassin's Creed Mirage, Avatar: Frontiers of Pandora and (hopefully) Skull and Bones.

The next few years for Ubisoft promise sequels to some of its most famous, surefire brands, and the studio's deeper involvement in the live-service game industry.. The company may not care for a significant breath of fresh air, but it is possible that it will be able to stabilize its position and take more interesting steps in the future.

How to Destroy a Kingdom in Bannerlord