Quite fresh, as it was released only on November 16, Call of Duty: Warzone 2 was met with a huge wave of criticism from the gamers. They turned out to be merciless to Raven Software's new online FPS, pouring out a bucket of slime in the form of unflattering comments and reviews recently on Metacritic and Steam. 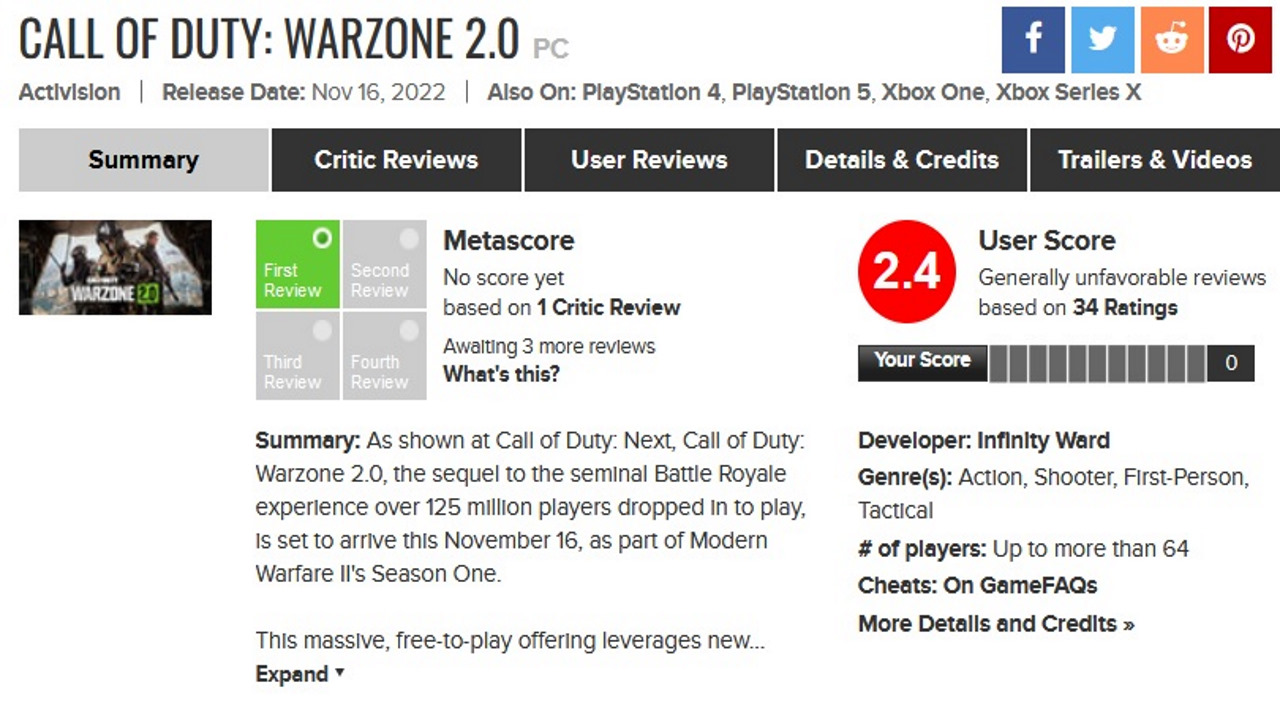 A stream of criticism

Since its release, there almost 9 thousand reviews for Call of Duty: Warzone 2. have been posted and nearly 6 thousand of them were critical. As a result, only 34% of players on this platform left a positive review. The situation is similar on Metacritic. The PC version received an average rating of 2.4/10 based on 34 reviews. The same rating was earned by the PlayStation 5 release, based on 20 reviews. At this point, the least rated is the PS4 version - it received a score of just 1.3/10. However, for the time being this platform has only 7 reviews, so the situation may yet change.

The main sins of the new Warzone

PC players criticize the new game of Raven Software primarily for the introduction of targeting support on gamepads, which spoils the fun, significantly facilitating gameplay for those using them. There were also voices about problems with running the game on PC. In turn, everyone agrees on the poor gameplay mechanics and performance. The Al Mazrah map was also criticized. The situation, to put it mildly, is not saved by the fact that the servers of the first installment of Warzone, due to the debut of the new part and the desire to promote it, were shut down until November 28. Here are a few examples of reviews from both Steam and Metacritic about the new Call of Duty:

"A game written on a knee, not recommended", declares Girlson

"Downgrade, congratulations. Everyone teleports, optimization fails at every turn compared to old Warzone, voicechat/chat is a failure," lists White and Blue Red

"There is no optimization. Servers are crap. The game constantly crashes. I'm not sure I would play it even if I got paid for it. I wouldn't recommend it to anyone," writes Headlesscake

"I tried to give this game a chance, but it is unplayable. The movement, user interface, loot system, graphics and sound are just awful. It's a very clunky and weird game. I don't recommend it," writes Elijahtantouri

There is still hope

It's possible, however, that the dire reviews for the new Warzone will change in the future. The reviews are coming down largely from people who have played the new game only a few times. There is therefore a light at the end of the tunnel for Call of Duty: Warzone 2 and maybe in some time gamers, after becoming more familiar with the game, will change their minds. Especially since the developers are apologizing and promise to make improvements, listening to the voice of players.

Warhammer 40K: Dartkide - Complete Weapons List and How to Unlock