More than two years after the release, Assassin's Creed: Valhalla has debuted on Steam. However, it turned out that Ubisoft's game does not take advantage of several basic features of Valve's platform. For example the achievements are unavailable. Although playing, you can still earn them in the Ubisoft app running in the background, but not on Steam.

The gamers obviously did not like this. They gave vent to their dissatisfaction by writing more than 4,000 comments in this thread. Many of them are requests to Ubisoft to add Steam achievements and expressions of surprise that this feature was not thought of right away. After all, previous installments of the series - AC: Origins and AC: Odyssey - make use of it.

Yesterday, Ubisoft issued an announcement (availalbe below) that it intends to analyze the problem in terms of whether the implementation of achievements on Steam is even possible. (strange if it wasn't). At the same time, the company asked players to limit any discussion of the issue to a single thread to "maintain transparency in the forums." Steam users have been warned that failure to comply with this suggestion could end in a warning. 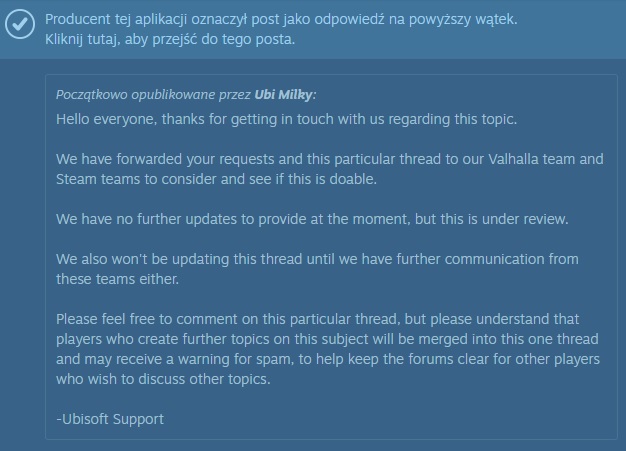 It is said that the law does not work backwards. However, in this case it apparently did - or at least that's what the Reddit user sevansup claims. In his own words, he was punished for creating a topic on the Steam forum in which he wrote "just one post" with the content: "It's a shame, because none of these things [Steam achievements and collector cards - ed. note] would have been difficult to add. I hope they will reconsider."

The Internet user asserts that he deleted those words last week - before Ubisoft's announcement and the aforementioned thread on Steam. The latter part is wrong. After all, the discussion began on November 21, which is fourteen days before December 5 - i.e., the beginning of last week - and by that time it had already counted more than 400 posts.

The existence of such a long thread dedicated to the problem in question apparently prompted Ubisoft to delete the other threads - including the one started by sevansup. Thus, the user received the aforementioned warning - allegedly the first one in twenty years of using Steam. Out of concern (rather unjustified) that engaging in further discussion could result in the blocking of the account to which he has some 2,000 games assigned, sevansup decided to publicize the problem on Reddit.

It can be concluded that the panicked Internet user is exaggerating a bit. It can also be concluded that Ubisoft is overreacting a bit, caused by the fact that out of the more than 1.5 thousand reviews that AC: Valhalla has collected within a week of its release on Steam, the positive ones account for only 62%. It certainly doesn't help either that many of the negative reviews are precisely due to a lack of achievements and do not constitute an evaluation of the game as such.

Let's hope that Ubisoft will solve this problem in the simplest possible way - by implementing achievements into Assassin's Creed: Valhalla on Steam. It is worth adding that another game from the French company, which returned recently on Valve's platform, namely Anno 1800, also lacks this feature. Instead, it has collector cards.

High On Life - Tammy and the T-Rex and Other Movies

High on Life is an FPS for Rick and Morty Fans; Launch on Xbox Game Pass and Reviews

High On Life - Tammy and the T-Rex and Other Movies

There's Too Much of That in Cyberpunk 2077; Pawel Sasko on Game Mechanics