Announced in June, Wo Long: Fallen Dynasty, the new work by Team Ninja, strongly electrified gamers around the world. Even before its release, the title was named a competitor to Elden Ring. It's hardly surprising, by the way - considering the earlier materials from the game, there is a good chance that it will clear the top of the best soulslike games.

So, if there are any among you who have also been sharpening their teeth for Wo Long: Fallen Dynasty, we have good news. All PlayStation 5 and Xbox Series X/S owners can try the game's demo right now. Admittedly, the action RPG will also be available on PS4 and Xbox One on its release date, but apparently the developers want to present the best console release. 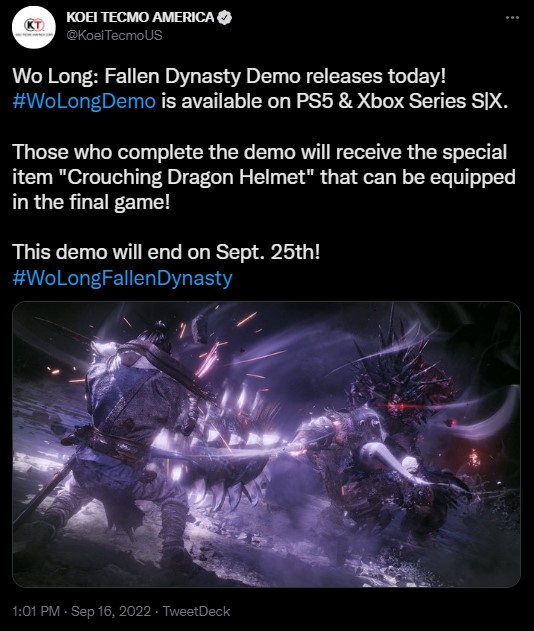 Bonuses for those willing to play

It is also worth mentioning that those who complete the demo will gain a bonus item - the Crouching Dragon helmet, which will be available for their character in the full game after its release. However, this is not the end of surprises. Players will have the opportunity to take part in a special survey, aimed at gathering information by the developers to help in the further development of the title. As a reward survey participants will receive an original wallpaper.

Finally, it should be noted that demo is available for a limited time. This means that Wo Long: Fallen Dynasty demo will be available from today, i.e. September 16, until September 25. After that time, not only will you not be able to download the files, but also you will not be able to run the demo.

At the time of writing this news, we do not know the exact release date of Wo Long: Fallen Dynasty. It is only confirmed that the title will be released on PC, PS4, PS5, XOne and XSX/S in early 2023.

Overwatch 2 Battle Pass Divided the Players After All