After the California Department of Fair Employment and Housing filed a lawsuit against Activision Blizzard for harassment, sexual violence and gender discrimination that allegedly took place at the company, World of Warcraft players reacted with anger. Hundreds of players organized themselves to express their opposition to these disgraceful practices that allegedly affected female employees of Blizzard.

The protest was organized by the Fence Macabre guild on the Moon Guard and Wyrmrest Accord servers, but there are rumors that the idea has already been picked up and is spreading across other servers.

The action took place in the city of Oribos, where hundreds of players stood on the steps to the inn in protest, expressing their anger and discussing with other fellow players. At the same time, the organizers set up a fundraiser for the non-profit association Black Girls Code, which supports African-American women in getting into the tech industry. Fence Macabre has already raised over $8,000. 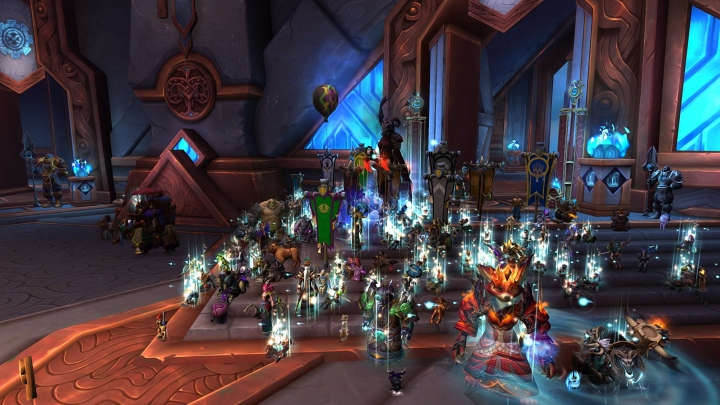 The guild released a statement after the Oribos protest ended:

"All of you, whether youve been with us since this morning or for only a portion, you have made a powerful statement with your presence. We hope this protest forces Blizzard to look in the mirror and see that those who inflicted harmbe it through direct action or by complacencyare held accountable.

Above all: We sit in solidarity for the victims and survivors of Blizzards hostile work culture, be they those who were forced to leave, those who continue to endure the suffering as we speak, and most: those who are no longer with us.

Change doesnt happen overnight. We know this. But change starts with a spark, a humbleyet powerfulspark all of you have shone bright today. We hope from this spark, Activision-Blizzard can illuminate the rot plaguing their company and make transparent, lasting changes to better their organization and associated IPs."

One of the organizers of the protest is Hinahina Gray of Fence Macabre. Her job was to invite people to join the protest group. People taking part in the event organized themselves in groups of several dozen people to avoid a crowd that would be dispersed automatically by WoW servers (via PC Gamer).

"As a queer indigenous individual, witnessing the mistreatment of people in industries which are conditioned against them has always been something I've been passionate about raising awareness for. Fence Macabre as a whole, since I'm a deputy, has always stood by their values in supporting and uplifting marginalized people," said the organizer.

One may wonder why the players decided to take the form of protest inside the game. The explanation is simple - the protesters have already purchased a six-month subscription that will not be refundable.

"Most of us have cancelled our subs, we're using the remaining game time to take up server space and raise awareness, and it's worked!," Gray says.

Activision Blizzard will have to work hard to undo this image blow. A lawsuit is one thing, but stepping on the toes of the players who build the communities that are the backbone of Blizzard games can be much more painful.

EU Cracks Down on Crypto; No More Anonymous Transactions?

He Revealed Battlefield Portal Months Ago - No One Believed Him