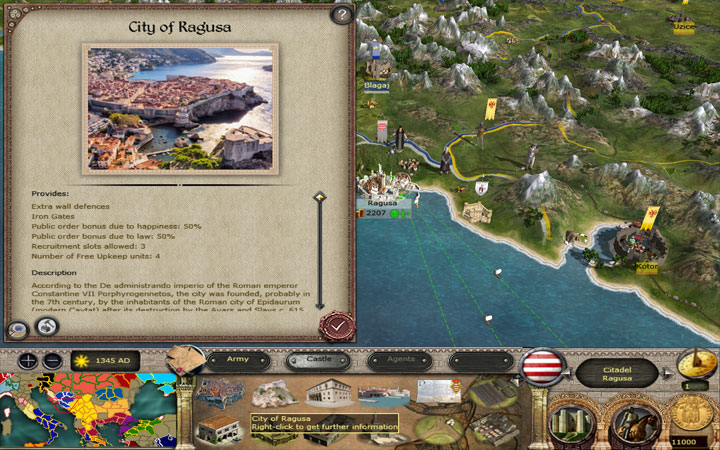 Tsardoms: Total War is a total modification for M2TW Kingdoms set in late middle ages, featuring a campaign centered on Italy, Balkans and Asia Minor. The reason we decided to make a mod like this is, firstly because we are familiar with the history of the region, and secondly (and most importantly) because this part of the world has pretty much been ignored by TW games and mods and we thought it would be fun to play and learn from it.

The modification will begin in the 4th semester (in September) of the year 1345AD and it will conclude in the year 1530. The reason we decided on this timeframe is because we wanted to make a mod about the fall of the Roman Empire and the subsequent struggle of the neigbouring factions for her legacy, so this timeframe fits perfectly.

The game will begin with the Roman Empire devided into two rival factions - the "House of Kantakouzenoi" and the "Imperial Regency of the Roman Empire" - which will struggle for the guardianship of the heir to the throne - John V Palaiologos. At the same time, the Regency is allied with the Bulgarian Empire and the Kingdom of Serbia, wh?se King (and wannabe Emperor) - Stefan Uros IV Dusan - is besieging the city of Serrhai which, by capturing it, will allow him to be crowned "Tsar of Serbians and Greeks". On the opposing side, the Turkish beyliks of Asia Minor, namely the Ottomans and the Emir of Aydin, have taken the side of John Kantakouzenos and have already joined the fight for their own interests, harassing the eastern parts of the Empire.

In the North, the principallities of Wallachia and Moldova are trying to defend themselves against Hungary and Bulgaria and they are also looking to expand their teritorries after the withdrawal of the Tatars.

In the Meditteranean and the Aegean Sea the two maritime Republics - Genoa and Venice - are competing and attacking each other for the control of the profitable trade routes from the Middle East and the Black Sea.

In southern Italy, the Kingdoms of Sicily and Trinacria, after the incident of the "Sicilian Vespers", are attemting to enforce their authority on each other's lands. In Northern Italy, the Italian city-states are vying for power, the Swiss Confederacy, in the Alps, is fighting for Independence against Milan and the Habsburgs, who have the vision of a grand Empire...

This is certainly the time for Total War!!

Number of turns per year:

01. Duchy of Austria (the House of Hapsburgs)

10. Duchy of Athens and Neopatria

Faction list is not set in stone, but we are very disinclined to change anything for now.

Are all factions getting equal attention?

Yes, of course. We are very proud of the fact that we are including some factions that have never been in a TW mod. We really want to give the community an opportunity to try them out.

The main cultures of the mod's factions will be:

1. Greek (for the Roman Factions)

2. Slavic (for Serbia, Bulgaria and Bosnia)

The map of the mod will include the western part of Asia Minor, the Balkans, Italy, HRE up to Strassbourg, Bavaria and Vienna, Central Europe and Eastern europe up to Kiev

Ports which will represent acurately their real-life counterparts

Roads that will follow their real-life course in the map

New strat_map building and character models for all the factions

New Religion scripts that will add great depth in the game

New eras in the game

Many more scripts that will make the game more realistic

Many new historical battles that fit our timeframe

- Unpack the mod in the Mods folder of your Medieval 2 Total War folder using the installer. PLEASE ENSURE YOU UNPACK IN THE MODS FOLDER NOT THE MAIN MEDIEVAL 2 FOLDER

CURRENLY NOT AVAILABLE (will be back soon)

- Steam installation: follow the same instructions as above, than go into Steam right click on the Medieval 2 Kingdoms game, go to Properties, then go to Set Launch Options and replace what is there with the following --features.mod=mods/Tsardoms_beta-1.5