Blizzard has a reputation of being one of the few game developers that put their hearts and souls into the process of creating each new title. Usually, this means that the players patience is put to a serious test, but we can agree on one thing  the final results are worth the wait. For two decades, the employees of this company have delivered undisputed hits, and their approach to making games still proves successful. This makes the studio not only one of the most popular, but also the most profitable developers. And although it's not often that we can find fault in the direction of the company's creative development (even the most controversial decisions eventually proved advantageous to the company), we can't ignore the story of one of the mods made for its game. You guessed it  we're talking about Defense of the Ancients, which in the past few years has evolved into a completely separate genre that brings its creators a profit of billions of dollars. Blizzard had within its grasp something that turned out to be an actual gold mine, but as a result of not paying attention and ignoring obvious trends has lost an excellent opportunity to strengthen its position. Now the company is desperately trying to catch up with the competition... But let's go back to the start.

Theres a beginning to every failure

Let's go back to 2002  this is the year when the famous mod appeared among the many modifications created for the immensely popular StarCraft: Brood War. Known as Aeon of Strife, at first glance it didn't appear particularly interesting, but the moment it was launched, it turned out that it offered content that was never found in classic Zerg vs. Protoss vs. Terran clashes. A completely different formula, substantially lower number of units and a simple map design that prompted frequent confrontations strongly appealed to the fans of the production, so it came as no surprise that the mod quickly left behind its competition.

How much are MOBAs worth? Billions!

Since 2010, the year when the MOBA boom broke out, the value of the games from this genre has been constantly increasing. However, instead of a steady growth, in this case we are dealing with a rise by as much as several hundred percent from year to year.

Five years ago, when the profits made by producers of this type of games were estimated, the total amount was approximately one million dollars for the United States alone. As early as the following year the number grew to nearly 30 million, and 12 months later, there was a 500-percent increase. Today, MOBA games bring profits close to USD 500 million per year only in the USA! This result is all the more significant as, according to predictions, the genre will soon leave behind the profits made by MMORPGs, which for years have occupied the leading position among the free-to-play games.

On a global scale, it's hard to gather uniform statistics, but considering that the MOBA fans from American servers do not represent even a half of the total number of players, one can easily conclude that we are talking about the earnings amounting to several billion dollars per year.

Shortly thereafter, Warcraft III: Reign of Chaos hit the market, based on an engine that generated much prettier graphics, and it's with this title that the most dynamic growth in the popularity of Aeon of Strife is connected. The transfer of the modification is owed to the then unknown Eul. His version was basically a copy of the original, but offered one very important element  leveling. As a result, the gameplay gained a completely new dynamic, and apart from greater intensity  also an added depth. This was enough to turn the freshly released map called Defense of the Ancients into an instant hit  and the best was yet to come. Blizzard had already noticed then that this new form of entertainment that the fans themselves organized within the companys production was rapidly gaining popularity. This situation was simply convenient to the developers  after all, to play DotA they had to buy Warcraft III in the first place. 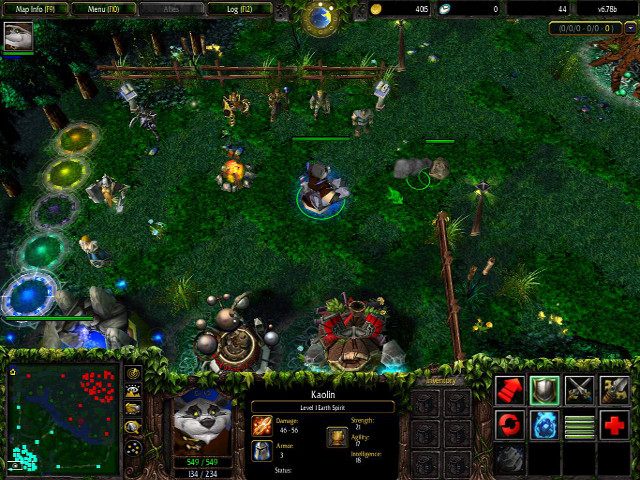 It all started innocently...

The fan project started by Eul gained momentum when another modder took over the work. A certain Meian made every effort to balance the game, and consistently added new content in the form of successive characters  such an approach quickly paid off. Every day thousands of players launched Defense of the Ancients, and if we take into account numerous other maps based on similar principles, we can go so far as to say that that this formula almost completely dominated the modding scene centered around Warcraft. The real breakthrough, however, didn't come until 2004. First, a new version of the map referred to as DotA Allstars emerged, and soon thereafter the whole project was taken over by Guinsoo, IceFrog and Neichus. What happened next, exceeded all expectations  the modifications developed by the three modders turned out to be so good that almost the entire community abandoned any alternatives and focused on this particular option. Over the next twelve months, the production was constantly polished, and even Guinsoos departure didnt affect its popularity. Around this period the first professional DotA tournaments were organized and the e-sport future of the modification was sealed... by Blizzard itself.