Video game worlds can be delighting – both the old Morrowind, or the newer Skyrim, not to mention The Witcher 3: Wild Hunt and Red Dead Redemption 2. The virtual realms can keep you engaged for many hours, but not everyone will have an equally pleasant time. I was bored – not to say overwhelmed – by Assassin's Creed: Odyssey, and I vented the sentiment some months ago. The approximately two hundred hours it took to "max out" the game were an ordeal rather than entertainment, and I was distracted so many times that at one point, I decided to never do it again.

When Techland announced that completing 100% of Dying Light 2 was at least a five-hundred-hours errand, I felt mostly amused. I played the original for no more than thirty five, and even though the world in the sequel was supposed to be bigger, I couldn't imagine what else is there to do in VIllendor for another two, three or four hundred hours... But now I know – leap from rooftops and maul zombies! Or, in other words, explore. 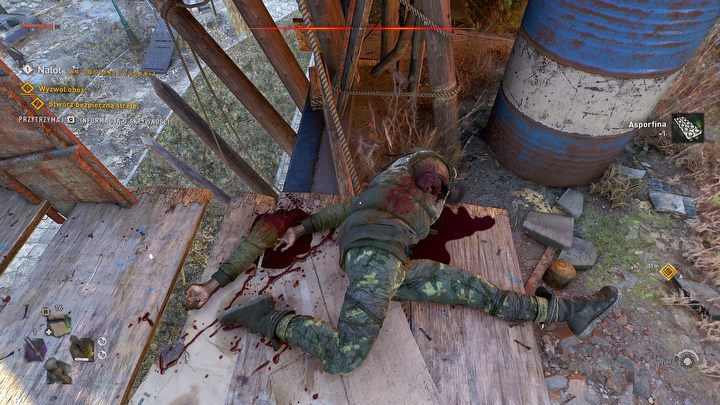 The bow may be OP, but sewering enemies' limbs is much more fun.

You could wonder if the developers from Techland will provide an interesting story, memorable characters, attractive graphics, and whether their new creation will be just a good, error-free product. And although the first three of these elements are more subjective and hence may cause reservations, the fourth deserves more consideration. The fact is that the creators didn't manage to avoid some mishaps – which was to be expected. Dying Light 2 is still an excellent game despite these bugs. Even though they're there, we can turn a blind eye because the core elements, the foundation of this production, works extremely well.

These are, of course, parkour and combat. These were already great in the prequel. It's been a long time since I had so much fun chopping off heads and limbs and breaking bones of my opponents (in games, of course). You can actually feel the weight of the weapons – one time, when I faced five thugs during a quest, I couldn't disagree with Aiden, who said (because I told him to) that he was looking at five dead guys. I knew that the baseball bat I had would break even their thickest bones. It was over in an iffy, and the memory of the three bodies swept with one powerful blow accompanied me for a few more minutes after the fight.

Parkour is also great, though I had to unlock the first few skills to be able to say that. You can arguably do without them, but it's not very satisfying. Aiden – unlike Kyle from the first Dying Light – doesn't get tired while running, but loses more health when falling from lower heights, cannot slide, nor hang from the edges for too long. However, when we buy the appropriate skills – such as bouncing off the walls and wallrunning – and develop the hero's endurance a bit, we will be able to whiz around the town at full speed, without even thinking about going down to the streets. 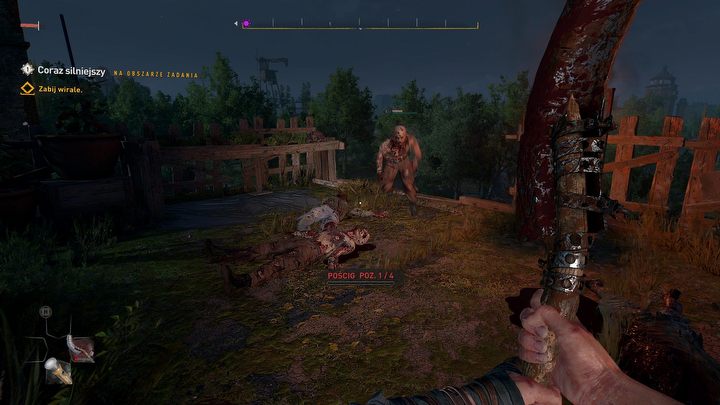 At night, it's easier to get into trouble outside, so it's better to spend it on combing the buildings.

These elements contribute to the third core element of Dying Light 2, namely exploration. If you enjoy thorough exploration, finding collectibles and discovering easter eggs, this is the game for you. Villedor offers plenty of activities during both the night and day, and the game does a fantastic job of tailoring its gameplay elements to the time of day. After sunset, when the infected take to the streets, it's worth venturing into dark alleys, abandoned shops, metro stations and GRE facilities that serve as quick travel points. There, you can find not only useful resources, weapons or equipment, but also inhibitors necessary to increase the protagonist's stats. You can also play cat and mouse with the undead, having some fun running away from the horde, and perform some of the quests that are only accessible at nights.

The sunrise changes the face of the city dramatically, opening up some opportunities and closing others. My favorite activities were those that required climbing some of the tallest points on the map, and figuring out the way to do it. I mean both the water towers and power plants – solving these puzzles is often quite a feat – but also military drop points or relatively easy windmills. It's a pity there's so little of these kind of tasks, because looking for the way up is a great fun. Interestingly, while the game often clearly indicates how much stamina is required to cope with a given challenge, you can sometimes circumvent these guidelines with a little cunning, further increasing satisfaction you get. 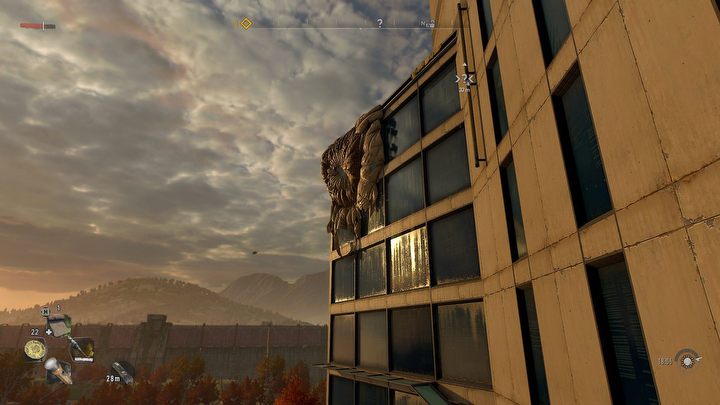 Collectible localized – now all you need to do is figure out how to get to it.

All of this can of course be trivialized and reduced to regular question mark checking, like in Assassin's Creed: Odyssey, infamous from this perspective. So what's the difference between exploring Dying Light 2 and a game from Ubisoft? The fact is that getting from point A to point B is just so much more fun. Each newly acquired parkour skill means that in Aiden's repertoire of moves is enhanced, and even if it doesn't completely change our way of moving, it can affect how we look at individual elements of the environment. A barrier, which previously did not seem special, at some point becomes an ideal object to bounce off of and continue running. The ability to rotate one hundred and eighty degrees mid-air allows us to ignore vertical surfaces we encounter while climbing. Not to mention the wide range of gadgets such as a grapple hook or glider.

The journey beats the destination

The fun that comes from traveling means that even when performing trivial, often silly side tasks, a person doesn't really get bored. I'm thinking of a quest commissioned by a certain Lola – an avid singer, who unfortunately doesn't sing very well. The poor girl is devastated because she has lost her mink shawl (or at least she claims that it was made of the fur of the poor animals). She claims the wind took it, so we set off and start chasing the darn thing. The chase ends quite quickly, and we return with the loss to Lola, who is already waiting for us with a song on her lips.

Trivial? Yes. Not meaningful? Not at all. But this type of mission in Dying Light 2 is a pleasure to execute. And by the way, this lets you not only run around the rooftops, thus developing your parkour skills, but also kill a few infected, and find places that are just asking to be explored. 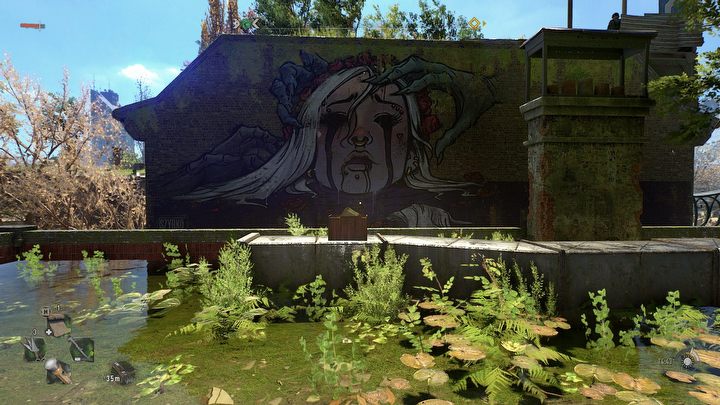 Dying Light 2 is a real treat for fans of collecting.

And it's worth doing – especially if we want to max the game out. In Dying Light 2, you can find a whole lot of collectibles. Collecting a complete set of notes, recordings and graffiti seems a difficult and extremely time-consuming task. And that's not all, because the military convoys and inhibitors are also scattered around the world. The game also includes challenges such as helping out fifty survivors, running for nine hundred and sixty kilometers, or saving up a round million in cash. It's great that the exploration is so enjoyable, and the individual elements of the gameplay constantly mix with each other, otherwise "platinum" would be available only to the most persistent players.

The question is whether all these activities really require as many as five hundred hours. After all, that's almost twenty-one days or, if you prefer, sixty-two and a half working days. Well, I think they do – if we also want to play the game twice, on both sides of the barricade: Survivors and the Peacekeepers, and we will really feel the need to look at every back alley. It's worth noting that it's possible only after completing this title twice and making various choices, because some of them block access to some locations.

Of course, there's also the cooperation mode, which could sufficed for many hours in the first Dying Light. On Steam, you can find reviews of people with even over a thousand or two thousand hours spent with the original. Why, then, in the case of the sequel, it should not be the same, especially since it is better, prettier and more fun than the previous part? I'm not saying, of course, that it will turn out to be an equally thrilling game for everyone – because it doesn't have to be that way. However, I am convinced that enthusiasts who decide to devote their time to Dying Light 2 will not complain of boredom and lack of content even after that many hours. Especially since the game begs for content-rich story expansions, which will probably arrive in some time. And will I join the geeks who spend every free moment in the game? Maybe. After all, it wouldn't be the first time that I have devoted myself completely to one video game.