Dont you miss looking for talented people with their own projects, like you did with Blizzard, BioWare, Obsidian, and others in the past?

I did enjoy that. Today its a different area though. Now people say: I dont want a publisher. But I used to enjoy finding talents, mentoring these people. However, everything happens for a reason. It was miserable as it was, and now Im back doing what I want. Once youve gone through hell, you appreciate when things are good so much more. [laughing]

Do you think Interplay could have survived if in the late 90s the industry was the way it is today  with extensive crowdfunding, very strong digital distribution, etc.?

Only if we had transformed the company the way I described. We had too many things going on. It was like everything went wrong at once and it was just a difficult time. But if I had been given the opportunity to bring it down with a small crew and be more tightly focused  yeah, then it would be still doing great today.

One more question about the past  this time about Fallout and its main creator, Tim Cain. Was Fallout created internally in Interplay from the very beginning, or had Tim Cain started developing it externally and was only later invited to Interplay when you recognized him as a talented developer?

Fallout started as something meant to be a follow-up to Wasteland. It was never outside the company. There were some stories in the past that some people were secretly working on it. But I was in charge of the development  there couldnt be anybody working secretly on any project, I was paying all the bills. There was a small team working on this, composed of Tim Cain, Leonard Boyarsky, Jason D. Anderson and all these guys. There was always that idea: OK, I cant get the rights to do Wasteland, I give up, lets go make something else.Thats how Fallout was born. The team slowly came together over time... Those guys did a wonderful job, they made it better and even gave it their own personal aspect. The genius of what they did was to take the innocence of the 50s and mix it with hyper-violence. That was a brilliant idea and that was all them. But it wasnt a secret that I didnt know about or anything like that. 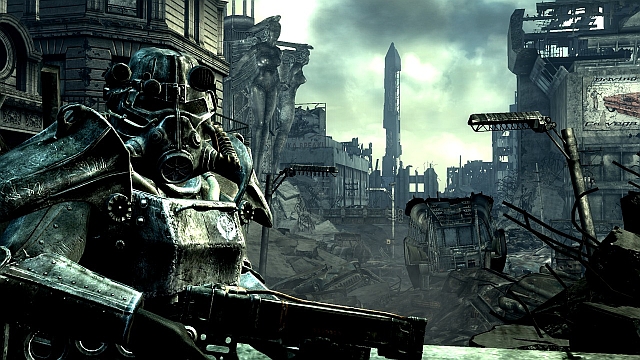 Brian Fargo seems to be content with the direction Bethesda Softworks is taking the Fallout series.

Have you considered bringing Tim Cain in to inXile Entertainment?

He already has his own company. We have actually spoken to him about making Wasteland 2 but he couldnt or didnt want to work on it the first time we approached them. We have talked to him later on about maybe doing something but it didnt happen. However, I hired Jason Anderson. I used to go with him to publishers and say: Look, here is the godfather of Fallout and Wasteland, I was the exec producer of Fallout and Im keeping that thing going. I had Michael Stackpole who was also on Wasteland. All of them have great stories. I brought them with me... and we got nothing from publishers or investors. Later I was doing other things but in my mind that was the big project I thought everybody would love. Then Bethesda came out with Fallout 3 and it sold millions of copies. So I went to publishers again and I said: Look how big it can be! but they still responded: No, no, no interested at all.

Speaking of which, do you like the direction Bethesda took with Fallout 3  an open world, first person perspective, and so on?

Fallout is lost to you but you reclaimed the rights to Wasteland and The Bards Tale. Is there any chance that you will also reanimate such classic franchises as Stonekeep or Sacrifice?

Anything is possible. However, it would be tricky to make two dungeon-crawlers. But... I dont know, I have other ideas that I think will surprise people.