After the first ten hours with Elden Ring, I started to wonder when I would start loving this game for real. I've been wandering around the map, killing minor bosses and staying away from the main plot – enjoying the exploration, spectacular combat, and gorgeous landscapes. But I also haven't really come across anything that would justify the outpour of enthusiasm that makes this game seem less a game, and more a generous gift of benevolent gaming gods. Absorbed by such deliberations (and running away from giant bears), I reached an inconspicuous building topped with a dome, hidden somewhere on the side of a forest path – completely inconspicuous. Inside – nothing, except for the elevator and the lever that operates it. I went downstairs, the screen read "Siofra River," and Elden Ring exposed its inner workings, revealed the answer to why it's so compelling; it proceeded to showing me exactly where all these perfect scores are coming from. 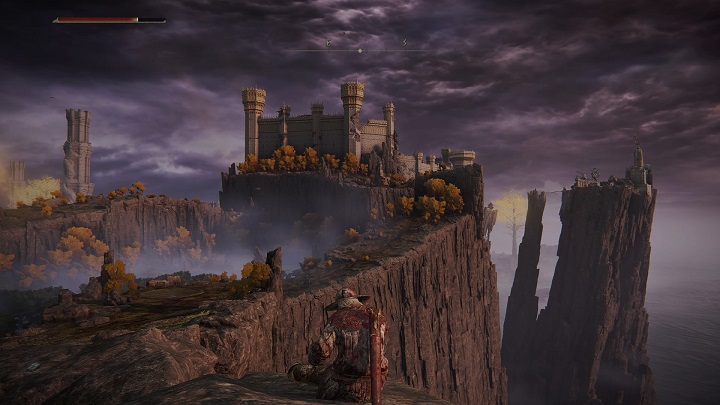 Before that moment I had of course visited a variety of optional dungeons, smaller and larger, but rarely stayed in them for more than half an hour. I can't say that I would not feel a certain disappointment about it. In its previous games, FromSoftware also used side locations and additional bosses – in Bloodborne, for example, I found Castle Cainhurst and Martyr Logarius one of the best moments of the whole adventure, and even getting there was quite a feat.

I was so much used to rather small and somewhat inaccessible dungeons that when I accidentally arrived at the entrance to the location in question, having strayed from an inconspicuous path in the heart of the forest, I was taken completely by surprise.

Instead of going to a cave or mine, the elevator leads to vast areas on the bank of a river running deep underground. This place is so big that it takes its own map to navigate, and the game even lets us summon Torrent to move faster. However, it's not so much about the size of that location, as it is about the almost magical feeling of discovering an extraordinary secret. The vicinity of Siofra is full of gigantic ruins and smaller lakes, there's also a lot of game and hunters trying to catch it. Large groups of slow undead roam the rubbles, huge crabs lurk in the water, and astral warriors are preparing ambushes among the trees, ready to suddenly materialize on our way. Somewhere on the horizon looms a black castle with towers soaring in both vertical directions. When you look up, you will not see the ceiling of a cave, but rather purple-orange firnament, as if dotted with stars. Little here resembles the world "on the surface," but everything without exception is overwhelmingly beautiful. 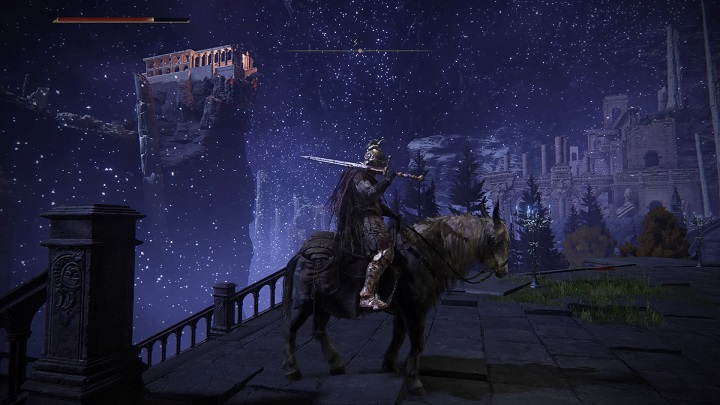 The textures may not be the sharpest on the market, but quality and elan of level design more than makes up for it.

However, I do not want to waste subsequent paragraphs convincing you that FromSoftware, at its best, is second to none in terms of locations design (which I think it is). However, it's worth stressing once again that visiting Siofra is not mandatory to completing the game. There are only two ways leading inside, and neither of them is at least suggested to you. Most of you will probably end up there at some point – the mentioned building with the elevator isn't hidden or anything; it's simply not a path that's suggested in any way, so it's very easy to miss it when focusing on following the game's main thread. And that's the awesome bit.

People have been increasingly criticizing some of the negative sides of high-budget open worlds, but one accusation seems to get relatively little publicity. Hidden or optional content often doesn't offer any interesting experience, instead rewarding our willingness to explore with a new weapon, cosmetic item or – in the worst case – an easter egg. When in Ghost of Tsushima I found a location that can only be reached by taking a hidden path and climbing an almost vertical rock, and was rewarded with a piece of headware, I had the impression that the creators patted me on the shoulder for being a very patient and very curious boy indeed. Good job! I went sightseeing, wandered around, put in some effort, so I earned the reward – "Give him an armor dye," said the committee. I deserved it. 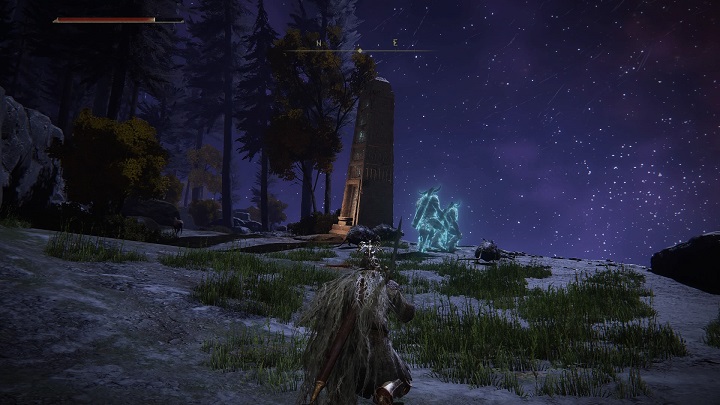 In the Elden Ring, the reward for exploring is getting a beating from some spectral warriors or – even worse – their fellow spectral archers hiding in the bush.

Is it wrong that developers want to reward players for their efforts? Absolutely not. The problem is rather that their approach seems condescending and – honestly – doesn't allow you to fully immerse in the game world. I'm a samurai and I'm trying to save my country from being invaded by the Mongols – new hat doesn't really help me with that. It reminds me, however, that beyond meaningful world building – for example through relics of Japanese culture hidden here and there, or records about the history of the occupied island – developers also want us to be able to make our avatar look the way we want it to, rather than the way it would look like in alternative history that remains quasi-faithful to the real one.

I don't want to call out Ghost of Tsushima specifically – it's a really good game where the symptoms of "ubisoftization" did not develop into terminal stages. The game from Sucker Punch is just a good example of the general approach of large publishers to constructing open-world games. The main story brings the most diverse activities for everyone, there are outposts to take reclaim and collectibles for those who want to spend a bit more time with the game, and there are easter eggs and cosmetic items in secret locations for the biggest fans.

FromSoftware apparently doesn't care a smallest bit about such ways of segmenting and grading content, because the definition of content they proudly use is just different. Most designers wouldn't probably care about creating an underground location that's so extensive and beautiful and then making it not only optional, but also easy to miss. So why did they? It's simple: places like Siofra prove that following the beaten paths in Elden Ring will only let you penetrate the outermost layer of a world that runs much deeper. And whoever focuses solely on the main story risks missing much more than a new armor dye. 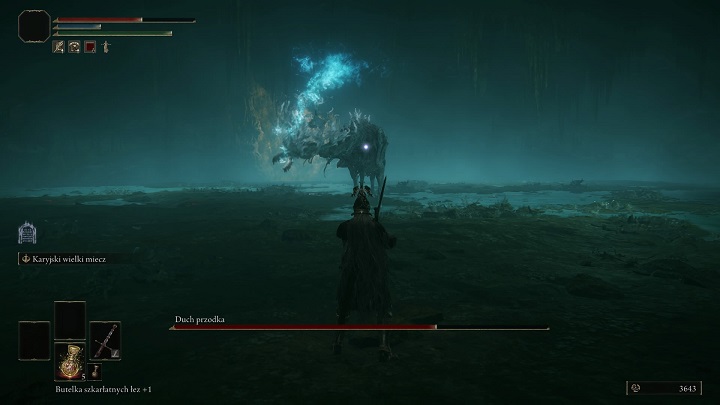 Without being curious, you can miss one of the most majestic battles in FromSoftware's history.

The desire not to miss out pushes players to explore every corner of the map, in full awareness that they have a slim chance of discovering everything there is in one go. This is another departure from the general guidelines used by the biggest publishers: FromSoftware scatters interesting locations all over the map, doesn't bluntly direct you to places that will have something interesting to find, and allows players to get lost. All this makes moments like discovering Siofra amplify the impression that Elden Ring is a huge, mysterious world full of secrets that are just waiting to be discovered, could make your jaw drop, but are also perfectly disguised.

These optional locations wonderfully reinforce the lore and multi-layered nature of the world, making it feel truly fantastic. The Tokyo-based studio has always had a unique idea for the narrative – story as such was non-existent; even if you read all the item descriptions and considered every line of the dialogs, making sense of it all was like trying to understand water. The Elden Ring is a bit more overt when it comes to the player's place in the game world, but you still have to bridge some gaps yourself using surmises and imagination. The Siofra River offers many possibilities in this respect. This place is clearly ancient, inhabited almost exclusively by the specters of mighty warriors, and sluggish, half-petrified spearmen. At the same time, soaring ruins, pillars that we can light up, and one of the bosses, the mystical Ancestor Spirit, create a vision of an extinct, spiritual civilization, capable of erecting gigantic structures and communicating with its own ancestors. 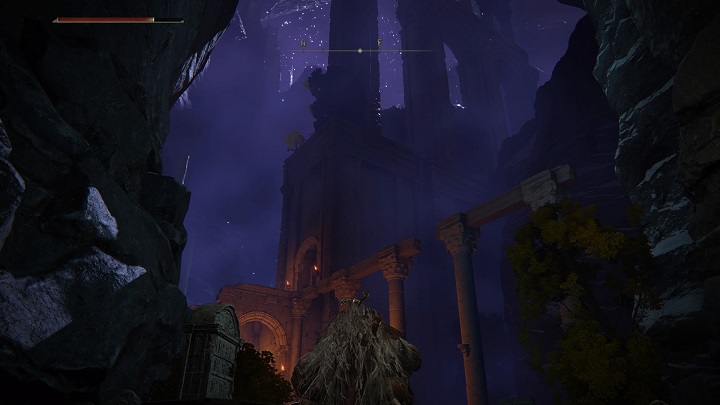 Since even such a civilization has collapsed, are our efforts on the surface worth anything?

Is this part of the "official" Elden Ring canon? Not really. These are just my ideas, shaped by my perception of this location and adjusted to my previous experience with the games. And this is where all the magic lies: when experiencing the surface above Siofra, others may have completely different feelings. Maybe someone will notice a hidden meaning in the architecture of the ruins, maybe the entire world is full of references to cultures unknown to me, maybe someone will end up here at a later stage of the game, so discovering all the nooks and crannies and killing both bosses will take less than half an hour. Multiply it by dozens of locations, bosses, skills and weapons – and it's not difficult to imagine that the adventures of virtually every player will turn out to be unique.

I can't imagine another big, "triple-A" developer creating a place of similar magnitude just to leave it randomly somewhere along the edge of an obscure forest path in the hope that players will eventually find it. If Elden Ring was created with the assumption of preparing an open world, full of content, in accordance with high-budget trends, a location such as the Siofra River would be mentioned by every other NPC and would host its separate side-quest line. The elevator to the underworld would be marked on the map with a telling question mark, and the area itself would be full of collectibles and memoirs. Again, this text is not about scolding any particular game for doing its business – everyone has the right to expect that they're putting an effort into something that the players can actually see and experience. But with that approach, you're oftentimes losing forsaking the sense of adventure at the expense of desperately trying to give all the control and awareness to the player. 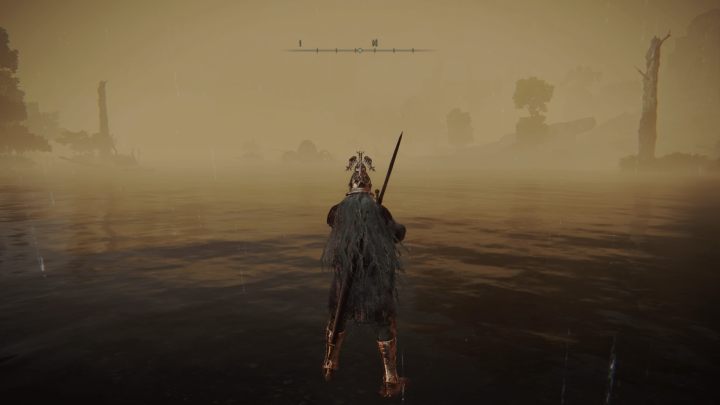 Not everyone will get an equal portion of this adventure.

The adventure should be yours to discover; it should appear unexpectedly, surprise you with its boundlessness and beauty; it ought to materialize in front of you during a panicky escape from a bear, rather than be telegraphed with map markers and a side quest that requires gathering five kinds of moss. I can't really tell what other secrets still lie in Elden Ring, and frankly speaking, I would equally expect there to be fifteen more of these, or none what so ever. However, this blessed unawareness makes entering every cave and opening every passage to forgotten ruins with with stone keys all the more exciting. On the other side, there may lay something as fascinating as the Siofra River. The biggest accomplishment of FromSoftware may not be the very openness of the world, nor the secrets that you can find there, but the fact that it's so powerful in conveying the sense of a genuine fantasy adventure.