Elden Ring is one of those games that really makes you think a lot about what you are doing as you are playing it. It’s not a thinking game in the sense that it forces you to figure out intense puzzles, but it’s more thought-provoking in that it tests your awareness, strength, and even will-power as you make your way through its mysterious world.

Part of this is due to how the game is designed. Its world is massive but it also leaves plenty of room for you to choose how to approach its many locations and what to do next. This freedom is akin to that of Shadow of the Colossus or even Breath of the Wild and the sense of dread you feel as you play further creates a world that makes it feel disturbing as it does beautiful.

Following a similar format as that of former FromSoftware games, Elden Ring begins by letting you create your own character and selecting the kind of class you want to be. This first step is crucial as it will dictate how you approach the early enemies you will encounter. Classes look like those in past Dark Souls games, albeit with some name modifications, but the formula is the same. You can focus on magic as an astrologer, swing a sword as your go-to warrior, or choose one of several other types that give you a unique approach to battle with differing stat build-outs. 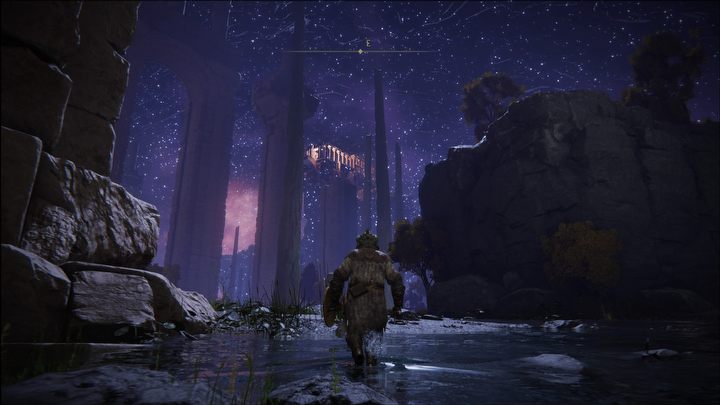 As I mentioned before, your initial class can really affect how you play Elden Ring as some characters are beefier than others and can take more hits before you die. Other classes excel in close-range combat which will require you to master the art of dodging, blocking, and even parrying if you have a shield. As you progress in the game and level up, you can increase their default stats to your liking so you could, in essence, become a powerful mage that can wield a greatsword.

The first few hours into the game are crucial in getting you comfortable into the world Elden Ring puts before you as how you play can truly affect your overall experience. I, for example, started off as an astrologer simply because the name sounded cool and I wanted to try wielding magic for a change. After a couple of hours playing, I realized I started focusing more on melee attacks and even using a shield to parry some attacks. I felt like it would take longer to increase more of my attack and defense stats to be in line with what I wanted so I made the difficult decision to start over and choose the vagabond class. Don’t get me wrong — you can easily beef up your astrologer and do major damage from a distance, but my decision felt right and it led to the game feeling so much more fulfilling.

One of the reasons why combat is so important in Elden Ring is because calling the game difficult is an understatement. This is a Souls-like game, after all, so you can expect ruthless enemies and fights that will test your patience as well as your willingness to overcome them and surpass the toughest encounters you will face. The difference here is that this game is actually a bit more approachable than its brethren due to some features that complement its open-world environment. 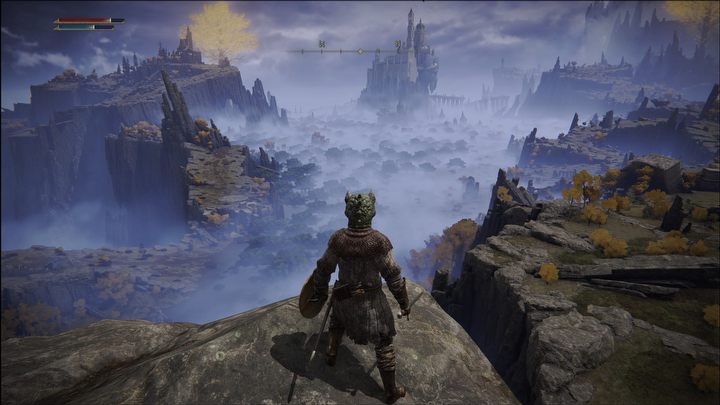 For starters, there is map that will come in handy when you are out wandering the realm of the Lands Between. If you just open your map and take a look at where you can go, you will be pleasantly surprised that there is more to your adventure than the areas that are initially obscured. What’s so impressive about the world is that almost every location is fully accessible when you first start allowing yourself to go anywhere you want. Your map not only comes in handy to place markers on places to go, but you can also use it to remember places you need to revisit later on.

Populated throughout the map are Sites of Grace, the equivalent of a Souls bonfire, that let you heal up and serve as checkpoints for your adventure. In addition to these major checkpoints are Stakes of Marika markers that simply let you restart from them. These come in handy in dungeons with bosses in them as they will prevent the painful dungeon run of other games. Some dungeons won’t be so forgiving nor will they offer so many checkpoints, but these do take some tension off your shoulders.

Instead of souls, runes are what you gain from defeating enemies this time and they play an important part in how you shape your character and, therefore, the areas you will feel comfortable visiting. The thing about Elden Ring is that it encourages exploration and it wants you to visit its every nook and crannies to see what lies on the horizon. That giant tree in the distance or that broken bridge will call out to you several times and you will be compelled to go there. Why? For the sheer sense of discovering what’s there and to essentially beat the game. 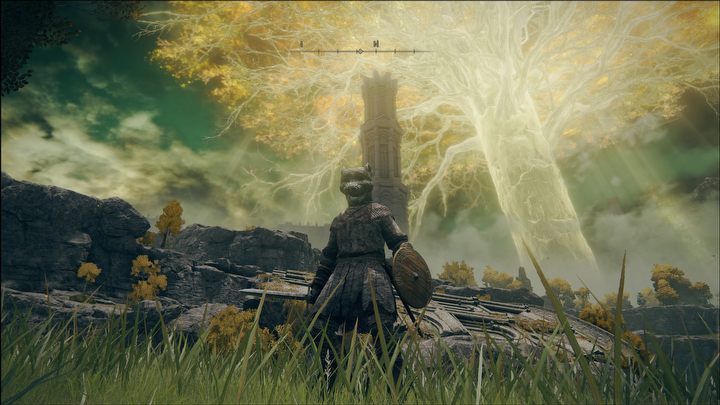 When you first start playing, you learn that you need to restore the titular Elden Ring by defeating monsters that each have a piece of the Great Rune. The game gives you some breadcrumbs in the form of a guiding light that provide you with the general direction of where to go — a castle here, a underground dungeon tere — but where you go is totally up to you. In fact, there will be times when you go towards the light and realize you’re probably not ready to go there yet.

Despite all of us playing the same game, what we experience in Elden Ring will be unique to each of us, and that is where the crux of its power lies. It is these differing experiences and its powerful emphasis on discovery that make Elden Ring a game that is worth discovering for yourself. Many will appreciate it, few will master it, but all will acknowledge it as a distinctive adventure that is as rewarding as it is dangerous.

I was one of those people who went into the fight with Margit the Fell and was obliterated more times than I could count. After enough times, I finally realized that I needed to step back and reevaluate what I was doing. It wasn’t that I was giving up, but it was that I acknowledged I wasn’t strong enough yet to fully take him on. Even with the added help of the game’s multiplayer summoning system that lets you bring another player into battle with you, I still couldn’t defeat Margit or even put much of a dent on his massive health bar. I was getting frustrated so I left, did something else, and had fun again. 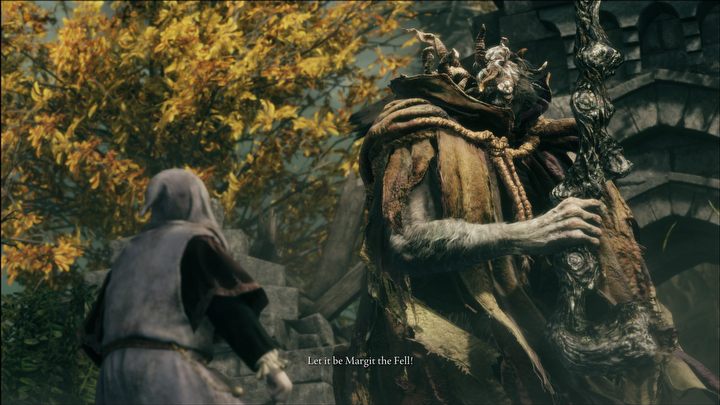 These moments will come up a lot during your time with Elden Ring. You won’t always be able to defeat an enemy right away, and that’s okay. Doing something else, exploring a new area, and then easily quick-traveling back to that pesky boss makes for a game that is easy to hate, yes, but gives you the freedom to make those mistakes and improve yourself. Just swinging your sword over and over may get you that win eventually, but learning your limitations and becoming a better player is ultimately a more satisfying experience.

The beauty of the Lands Between truly lies in its diverse areas you can travel to, some resembling the gritty worlds of Dark Souls while others seeming like something out of the pages of a Lord of the Rings novel. These various environments — from the woodlands of Limgrave to the bloody skies of Caelid to the ethereal atmosphere of the underground Sofria River — offer you a range of ecosystems, enemies, and enough room to get lost in.

Beautifully designed, these worlds are rich and diverse, but you can quickly tell that they put a strain on the PS5 even when played under Performance mode. During my playthrough, I encountered several times when the framerate would drop considerably even though there were no enemies around or nothing seemingly changed in my surroundings. Other times, textures took a few extra seconds to load when accessing new areas. Loading screens are as abundant as Sites of Grace, so while convenient, be ready to wait a bit each time you quick travel or even take an underground lift. These little annoyances weren’t much to destroy the experience, but they did distract me from the amazing world the game tries to paint. 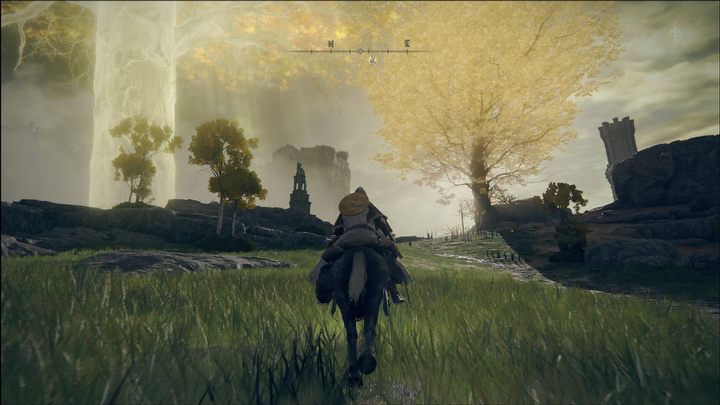 After countless of hours wandering the Lands Between, you are bound to discover something new you didn’t notice the first time. The game also dots the lands with NPCs that ask you to do favors for them so these become quests in the sense that you can complete them, but you will need to keep multiple mental notes of each one as the game doesn’t offer a way to keep track of them, a design choice that is almost in-line with its difficulty but also echoes its overall mystery. These characters also offer another glimpse into the sad, yet beautiful world you are in and offer you a glimmer of hope in the darkness.

Despite all of us playing the same game, what we experience in Elden Ring will be unique to each of us, and that is where the crux of its power lies. Some may find the game easier than Darks Souls, while others could be struggling within the first 30 minutes of game time. Some may find the game too short, while others could be 40-hours deep into their playthrough and not even close to finding one Great Rune.

It is these differing experiences and its powerful emphasis on discovery that make Elden Ring a game that is worth discovering for yourself. Many will appreciate it, few will master it, but all will acknowledge it as a distinct adventure that is as rewarding as it is daunting.

According to our users, Elden Ring for PS5 was a disappointment - the expectations before the release were higher than the current average user score.