Since 1981 players around the world could follow the adventures of B.J. Blazkowicz as he killed Nazis in all ways possible. Even though the games defined the first-person shooter genre and are often picked by players due to the gore and story with multiple sci-fi and mystical elements, there are certain locations, characters, and items that were inspired by the real-life stuff that we can read about in history books. Are you ready for some in-depth Wolfenstein lore?

As some suggest, Castle Wolfenstein is not an entirely fictional location – an obvious inspiration can be found in Germany, where the 17th-century Castle Wewelsburg stands. The castle served as the SS headquarters in the years 1934–1945. Heinrich Himmler and his top twelve SS lieutenants held regular meetings there and – allegedly – rituals as well. I cannot help but notice the symbolic meaning of all this – a master and his twelve disciples were supposed to resemble both Jesus and his twelve apostles, as well as King Arthur and the Knights of the Round Table. And as for knights, players got the chance to shoot guys wearing bulletproofs medieval armor in Return to Castle Wolfenstein. 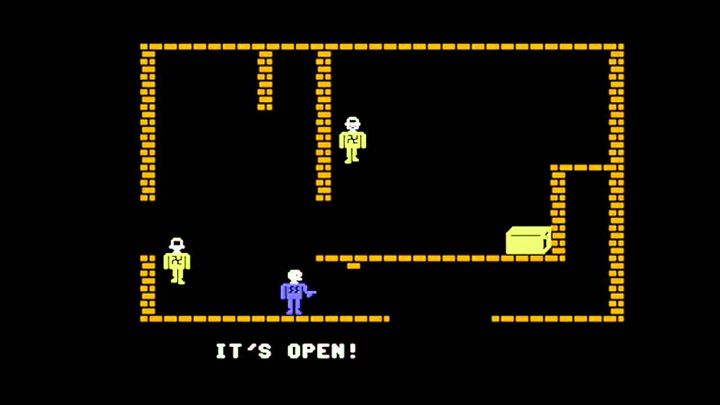 The first representation of Castle Wolfenstein from 1981.

This symbolism served as the foundation for all Himmler's occult activities which took place in Castle Wewelsburg. To this day, visitors can see the mythological themes and runic decorations inside the castle. All this resulted in multiple rumors regarding the place, which served as an inspiration for the Wolfenstein games. Consider the secret locations featured in Wolfenstein 3D – these secret rooms were hiding many treasures, similarly to the legendary vault dubbed the "Himmler Crypt", where Himmler allegedly stored all the Death's Head Rings that were worn by SS troops before they died in the war.

"How many goddamn Nazis are there in this world?"

Let us stick to Himmler for a while, as he connects many themes that served as inspirations for Wolfenstein games. According to many historical sources, Heinrich Himmler took one step further into the symbolic and the occult, as he believed himself to be the reincarnation of Heinrich I who protected Germany from the invasion from the "East" in the 10th century. The same monarch was featured in 2001's Return to Castle Wolfenstein as the final undead boss. 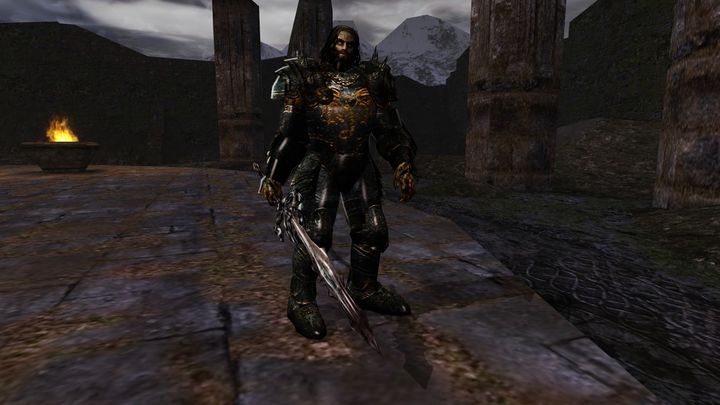 The final boss in Return to Castle Wolfenstein – Resurrected Heinrich I.

The Wolfenstein series features a femme fatale, who (surprise, surprise, I know) might be inspired by an actual person, namely Ilse Koch, also known as “The Witch of Buchenwald”. Koch was the wife of the commandant of Nazi concentration camps in Buchenwald and, later on, Majdanek, where she tortured the prisoners, forcing them to commit atrocities against each other to her own amusement. She also handpicked the inmates with tattoos she found interesting, as she later decorated her furniture with the skin fragments that contained these tattoos. In the two recent Wolfenstein games, players got to meet Frau Irene Engel – an Obergruppenführer who is a secondary antagonist of Wolfenstein: The New Order and the main antagonist of Wolfenstein II: The New Colossus. Both her outfit and general attitude might point to a certain sexual perversion of hers, especially when she meets B.J. face to face. Frau Engel, despite her hatred towards the Jewish protagonist, seems to be secretly attracted to Blazkowicz – in The New Order players got to experience it in the sequence where Frau Engel admired Blazko's “beautiful Arian features”. This hidden “affection” surely ended when B.J. smashed her face into pieces after he escaped Camp Belicia. The New Colossus highlights even more of Engel’s cruelty in the fanatical aggression she channels… OK, no more spoilers. Let me just leave it here and say that she is a horrible woman and makes B.J.’s life miserable on more than one occasion. 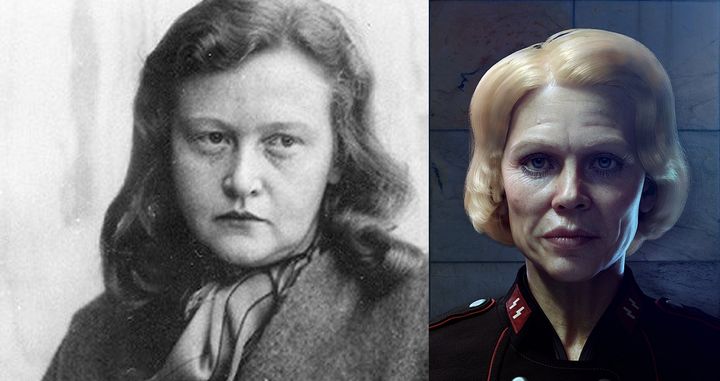 Femmes Fatales – Ilse Koch on the left and Frau Irene Engel on the right.

Another character somewhat inspired by an actual person was Wilhelm Strasse, aka General Deathshead (Totenkopf). He first appeared in Return to Castle Wolfenstein as the head of the SS Special Projects Division reporting directly to Heinrich Himmler (this guy again…). Among his most frightening creations were the cyborg soldiers (codename Project Übersoldat) who served in SS Paranormal Division during Operation Resurrection. In 2009’s Wolfenstein, Strasse was promoted to Oberstgruppenführer. This time around, Deathshead was working on the Veil weapon, which he planned to unleash on the allied forces. Yet again B.J. Blazkowicz attempted to stop him. Unfortunately, Strasse escaped.

In Wolfenstein: The New Order, Deathshead was the main antagonist working on the Prototype Robot, which would be a combination of machinery and broken human mind. Players got to see the cruelty he treated his “patients” with when exploring his labs, where he conducted genetic experiments, attempted organ harvesting, and transplanted human brains into robotic bodies. The description above brings one person to mind, namely Dr. Josef Mengele, who was an officer and physician in Auschwitz Nazi concentration camp located in Poland by the Germans. Mengele led the team of doctors who selected victims to be killed in the gas chambers. Those left alive (mainly pregnant women and children) were subjected to deadly experiments. No wonder B.J. wants to kill such a person so badly.

"Thanks, I'm more concerned about that medallion I found."

Another element in the Wolfenstein games inspired by true events was the technology (including both artifacts and weaponry). During the war, Nazis were allegedly preoccupied with locating ancient artifacts that, according to myths and legends, featured mystical powers. This included the titular item featured in the direct sequel to Wolfenstein 3D called Spear of Destiny. In the game, B.J. was dispatched to Germany to retrieve the Spear Hitler believed would help the Nazis win the war. 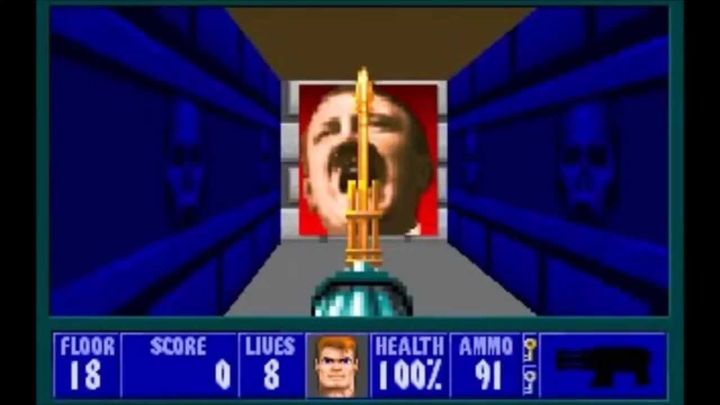 The Spear of Destiny.

Putting all the mystical elements spiced with conspiracy theories aside, the Spear of Destiny is a legendary item that was said to have pierced Christ’s side after his crucifixion. Because of the rumored contact with Jesus’ blood, the artifact is believed to contain holy powers that can be used by however wields it.

A Wolfenstein game without futuristic/esoteric weaponry? Nah… Every time players follow the adventures of Blazkowicz, they can lay their hands on some interesting firearms and use them to obliterate Nazis. Even though such weapons as Ubergewehr, LaserKraftWerk, and DieselKraftWerk did not exist in real life (at least none were found, so…), Nazi scientists did work on futuristic weaponry within the framework of Operation Wunderwaffe. By the end of World War II, Nazis were able to construct oceangoing U-boats, super-heavy tanks, piston engine aircrafts, jet and rocket-propelled aircrafts, helicopters, and multiple firearms that exceeded the weaponry utilized by the Allied Forces. According to some historical sources, back in 1929 a German physicist by the name of Hermann Oberth developed plans for the so-called Sun Gun – a space station with a 100 meter-wide disc to reflect sunlight onto a concentrated point on Earth. The history teaches us they did not design anything like this after all, nonetheless, just knowing that they were planning to work on it gives me the creeps.

"This isn't a war, but the breaking of seals, the undoing of life itself."

Let’s talk about something that started in real life as a mere symbol and was incorporated into 2009’s Wolfenstein as something around which Nazis designed an entire ideology. The Black Sun was Himmler’s interpretation of a pre-Christian Germanic Symbol, which he used for the decoration in the aforementioned Castle Wewelsburg. You might ask: “So what is the Black Sun in Wolfenstein?”. Bear with me for a while – in the game, it is a powerful mystical energy source that can be utilized to enter the shadow world called The Veil. In terms of the gameplay, this is somewhat similar to what we have seen in Prince of Persia: The Two Thrones, when the main protagonist, consumed by the darkness, switched between two worlds. 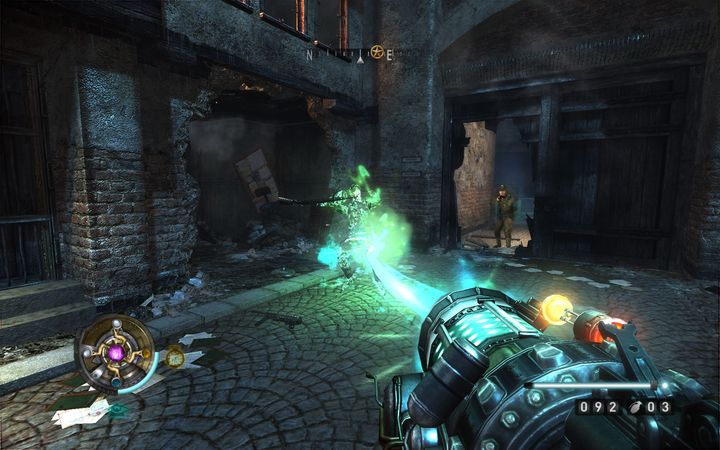 The shadow world called the Veil. And a futuristic weapon shredding Nazis to bits. Hell yeah!

The Thule Society laid the foundation for the Nazi movement before World War II. It was a German occultist group started right after World War I, and named after a mythical northern country featured in one of the Greek legends. Primarily, the Thule Society focused on the claim regarding the origins of the Aryan race. The followers of the Thule Society were very interested in racial theory and, in particular, in combating Jews and Communists. Apart from the occult and mystical elements, there is another thing that links the actual Thule Society with the Wolfenstein games. Helena Blavatsky, one of the founders of the Theosophical movement that evolved into the Thule Society, served as the inspiration for Marianna Blavatsky, the Nazi sorceress featured in Return to Castle Wolfenstein. In the game, Blavatsky leads the Society and works closely with – you guessed it! – Heinrich Himmler.

Even though Wolfenstein games are poor source material if you want to learn actual history, there are numerous elements there inspired by real people, organizations, and items. Even without spicing things up with resurrected knights and mystical powers, Nazis performed unforgivable crimes against humanity that history will (and should) never forget.

There are many more things one could indicate when comparing history with fiction. To those who want to learn a bit more about the possible alternative course of history I highly recommend reading The Man in the High Castle by Philip K. Dick.

Do you know any other elements in the Wolfenstein games that were (even loosely) based on real events from the times of war? Perhaps I missed something important? Let us know in the comments!

29 years after its initial release, Wolfenstein 3-D is still kicking ass and taking names. B. J. Blazkowicz returns in Wolfenstein: Blade of Agony – one of the best mods ever delivered for any video game.