Music is beyond cool!

Regardless whether you buy the game digital or physical, you will get the soundtrack  either on a CD, or MP3 dowloadable. The creators seem really proud with what they've achieved. It's as important a component of the whole experience as the quests and graphics. As far as we can tell, there were two great, artistic decisions made: not featuring any contemporary hits, and not jumping on the 80s, synth/vaporwave nostalgia bandwagon. Instead, the focus was on diversity and songs specially created by more obscure artists. 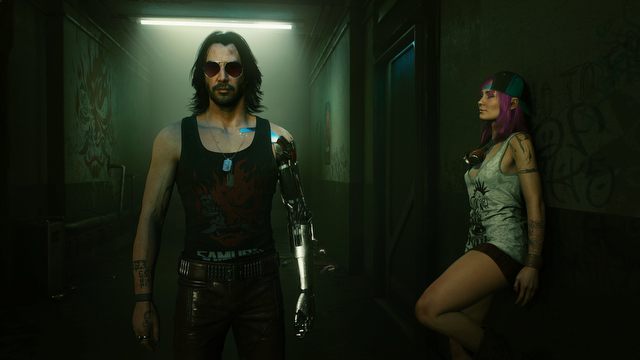 It's hard to show music, but Johnny Silverhand manages that.

The result is a sensational mix of genres, catering to all tastes. The music is most appealing, of course, while driving a car, when we can freely select the radio station, but it's also worth noting all those moments when the soundtrack is simply underlining a scene. Night City generally rarely is quiet. When roam the streets, we can still hear music playing in shops and radios around.

The also music perfectly emphasizes the atmosphere during mission, sometimes through a primal, deep and repetitive bass, sometimes a more elaborate, yet equally compelling composition. We've even noticed that by simply listening to the ambience, you can easily recognize where you're at, and what's going on around you. Music and sound play a similar role to graphics  they help create the game world, the Night City.