Marvel's Guardians of the Galaxy Essays

The heroes of Marvel's comic book (and increasingly cinematic) universe have had variable luck when it comes to computer game adaptations of their adventures. There are some solid titles, like Spider-Man for PlayStation, and some total flops, like the recent Marvel's Avengers. So, before the debut of the Guardians of the Galaxy video game by Eidos Montreal, there was no shortage of concerns about the quality of this work. It didn't take long from the announcement to the release, and there wasn't much buzz about the production itself either.

Fortunately, it turned out that the developers of Marvel's Guardians of the Galaxy came up with a really successful game. The high ratings and praises from players seem to certify the quality. Is there a recipe for a successful adaptation of iconic Marvel comics? There's certainly more than one way, but Eidos have found their own identity. Our colleagues from the French jeuxvideos.com managed to talk to the developers of Guardians of the Galaxy. So let's see how a Marvel blockbuster is made outside of Hollywood.

Not based on a movie

Video game adaptations of popular movies often turn out complete garbage. Probably because it is extremely difficult, if at all possible, to turn a two-hour show into a several-hours-long interactive game. So, the creators of Guardians of the Galaxy chose a very different approach  the went for their own interpretation of both the Guardians and their adventures. Because sometimes, not all of the original ideas turned out to be successful.

Jean-François Dugas (senior creative director): Working with Marvel was really fun and it was a great collaboration. On the first day, when we met and discussed where we would go with this project, they went We want you to make a unique take on the Guardians, we dont want it to be connected to the movies or based on the comic books. We want your own interpretation of that franchise. We were really excited about that because that was exactly what we wanted, and seeing that Marvel was on the same page as us was really nice. 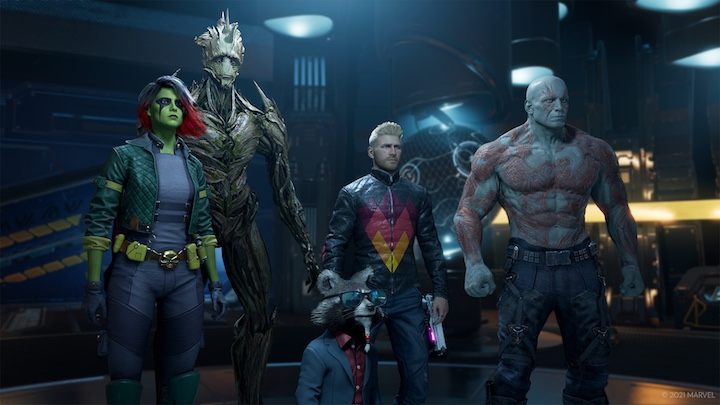 This team was supposed to look very differently  thankfully, only on concept arts in the end.

One of the first things we did after that was a brainstorm to start working on the characters. In the first concepts of Rocket, Drax, Gamora, we kind of turned it up to eleven. We really pushed the designs. For example, Rocket was as tall as human being, Draxx looked like you-need-to-go-back-to-the-gym guy. We went a little bit far.

We flew Marvel to Montreal, we sat at our couch and presented them the characters we designed, and they were sitting back, leaning on the couch, and it was not even 20 seconds of silence, but in my head, it felt like minutes and I thought: Oh my god, they are going to kill us. And actually, we really went too far, but they were really happy that we didnt try to mimic something that already existed. They were happy to see that we wanted to push, do something unique. They just helped us to achieve that balance of making sure that those characters are recognizable, but have different flavor from what youve seen elsewhere.[] It really is a fresh take on the franchise.

Bruno Gautier Leblanc (art director): It was very important for us early on to find a unique visual style that belongs to us, to distance ourselves from the movies and from the comic books even though we took much inspiration from them. We were very inspired by the early 90s 3D art. This is when people started playing around with 3d programs, making cubes, spheres and polygons. We realized there is something really unique about these early landscapes that were created with minimal objects. So, from there, we took those objects and started making alien landscapes with them, building cities and everything.

We realized early on that it was very minimalistic and we needed more details. So then, we went to look at what has been done in the new 3D, which was fractals and procedural art. Putting all these things together is what gave us a signature for our game.

Step outside your bubble

Eidos Montreal is a studio known for Deus Ex, Thief and Shadow of the Tomb Raider. These are fairly serious, dark productions with little room for comedy. It turned out that a complete change of atmosphere for a looser one can be very refreshing and that the team, which has never specialized in any particular convention, can find themselves quite well in something completely different.

Patrick Fortier (senior gameplay director): The biggest difference was that we worked with Marvel, which is of course an important partner in collaboration.

Another difference was the tone of the game  its much lighter. There is humor, there are some jokes, its colorful. It is a completely different game that we used develop before. So, we had to kind of unlearn things that we are so used to do. And that was especially the challenge when we started the project, getting to that groove, something completely different. We had to find the right direction, but it was fun to work on that game, on something which has humor, really positive emotions. It was great for the entire team. 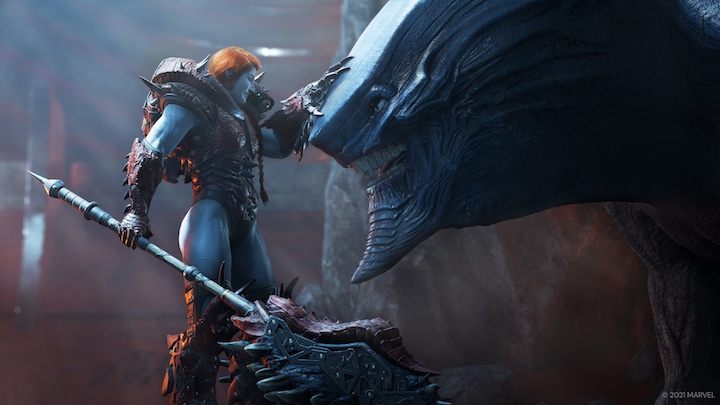 Humor is somewhat of a novelty in Eidos Montreal's games.
123
Next
Most Read Articles
Editors' Choice