I only spent about 3 hours in Battlefield 2042, but it was enough for me to say with my conscience clear that I've never played such a pretty Battlefield, and it's been quite a while since I've played such a good Battlefield! And "quite a while" means, more precisely, the times of Battlefield 3 and 4, as the upcoming installment returns to the modern warfare that seems to fit the full-scale war best.

With all due respect to BF1  there's nothing quite like watching helis dance around skyscrapers, columns of tanks heading to battle, and players using all sorts of gadgets and machines. After the first match, it almost felt as if someone had removed some of the roadblocks that had been limiting Battlefield for the past few years and finally let the game show teeth.

These are just my first impression after playing just a single game, on a single map and in a single mode. I had a good overall impression, although, of course, there were elements that I didn't like, but here, Battlefield Portal can completely change the rules of the game (literally, and figuratively). So what about the new BF 2042 warrants positive feelings and what doesn't?

Damn, there's plenty of bugs here! Is this supposed to be a beta?

At a closed-door screening for journalists, we played the same beta version that will soon be made available to everyone in open testing. Be prepared for quite a few bugs and glitches, but don't judge the technical condition of the game by them.

In an interview with the developers, this issue was raised and we learned that the build made available in the beta is a few months old. The current version is said to be significantly improved, with many bugs eliminated. Whether or not it's true  we shall see. 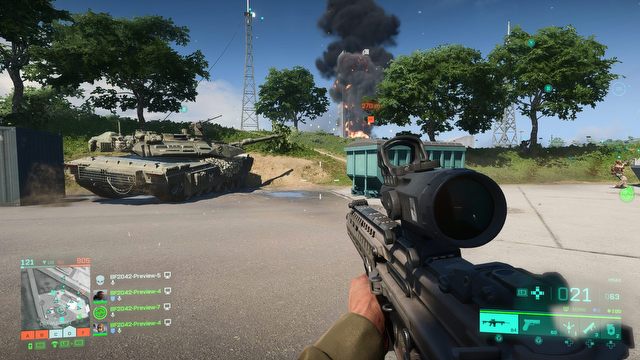 Entering the battle, I attach a scope with a mini collimator, grab a grenade launcher, and mount a silencer on the rifle. I get on the quad, a Little Bird helicopter passes over me, and somewhere in the back, a huge Abrams slowly advances. Far behind the rock, a sniper can be seen operating a drone on a tablet. A support soldier targets an enemy aircraft with a rocket launcher, fires  the Russian Su-57 plummets in a ball of fire, but the pilot chutes out and, with an accurate burst of fire, takes down his would-be nemesis in an act of revenge. Ahh... I love the smell of burning jet fuel in the morning, and I had no idea that I missed the contemporary setting so much in Battlefield!

The feelings of déjà vu from parts three and four were with me basically all the time and could be compared to the joy caused by returning home after a long time  only positive vibes. There was no shortage of novelty either. One small thing to enjoy is access to all the weapon add-ons during battle. The drop-down menu straight out of Crysis is extremely convenient and practical. We only had access to a few rifle modifications, but I still changed something in the field every time.

The robodog known from the trailers  Ranger  deserves a separate mention. The first encounter with it (especially the enemy dog) is pretty shocking, as the little machine is brilliantly animated and evokes genuine curiosity. However, when he starts to shoot accurately after staring at us for a while, things get a little hectic. It's much better to admire allied robodogs, when they're comfortably lurching behind soldiers. 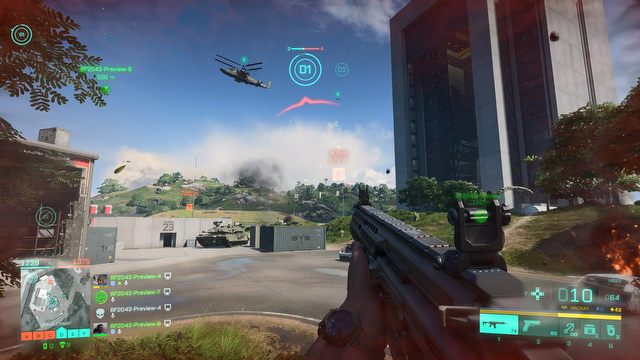 The contemporary vibe seems to work best for the Battlefield series.

Strength in numbers  as long as it's not bots

A major change for the new generation consoles and PCs are 128-player battles (on PS4 and Xbox One it's still 64). The doubling of the number of soldiers is indeed apparent. You very often can see small crowds hovering around one location, which gives the feeling of an actual battle being played out on a huge scale. It also means that no checkpoints should be empty and neglected. In fact, something is constantly going on in all strategic places, and the large size of the map and a variety of weapons allow you to support the defense or attack  also from afar.

A controversial issue is the mechanic of replacing any missing slots of the 128 players with AI-controlled bots. On the one hand, it's a good move that reduces the wait for battles to start. At first glance, you can't see any differences either. However, there's no denying that bots' skills have nothing to do with the skills of real players, and they're just cannon fodder most of the time. If things become surprisingly simple all of a sudden, and we start reaping lots of frags, it usually means we're mowing down bots, which is also apparent in their names. The authors claim that bots will be encountered mainly at the very beginning of the match, or in situations when there won't be so many people willing to play due to the time of day in the given part of the world. 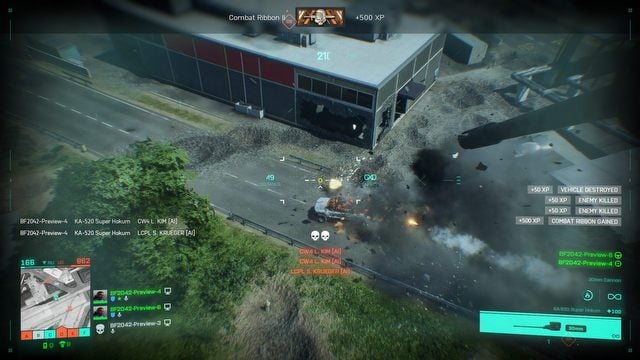 The gunner only works well with a good, skilled pilot.

The authors highly praise and advertise the gimmicks of the maps. The launch of the huge rocket from the spaceport is a typically cosmetic effect, similar to the so-called levolution from older games. There's plenty of smoke and debris, but the collapsing mast on the Caspian Border in part three was more impressive to me. The developers emphasized that making the rocket into some kind of essential game element would require creating new win/lose rules, and thus a complete rebalance of the gameplay. The tornado I was lucky enough to encounter in the game is more promising (the beta is supposed to have a 10% chance of a tornado occurring). Unfortunately, as I approached the border of the great vortex, the game crashed :) I will still have to wait to judge the effects of another epic storm.

The dynamic weather changes are already known from previous installments, and they may seem more interesting than the rocket launch. The map can plunge into near darkness under a layer of clouds, rain slightly affects the field of view, and wind effects are enhanced with great particle effects. In general, the visuals of Battlefield 2042 are top-notch when it comes to terrain and vegetation. The drawing distance is also impressive, but you can already see a clear decrease in the number of details with increasing distance. It's a little worse with buildings and various structures, which still look like they came out of a 3D graphics program, though here, it may be due to the ambient destruction mechanics. I really missed some natural scratches and wear marks on the gun, as each weapon looks like it came straight from the factory. 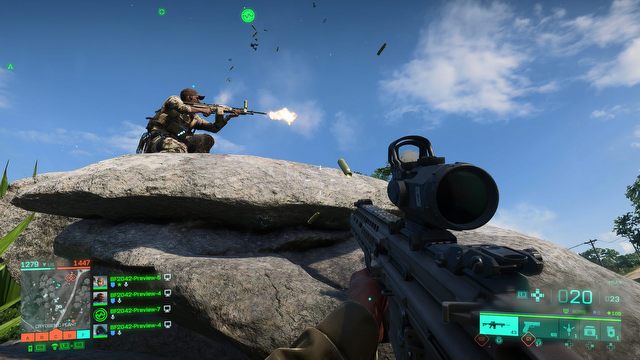 Ouch! It's hot! Be careful with those scales!

3 hours with just one map is not enough to formulate a definitive opinion on the game's biggest flaws. However, I'm certain that not at everyone is convinced by the idea of specific operators to choose from, rather than the usual division into armies and classes. This results in all soldiers looking like they were clones. I've seen situations, where stormtrooper Webster MacKay with a blue dot over his head shoots stormtrooper Webster MacKay  with a red one. Yes, in the thick of battle, you often can't see the details of a character's appearance, but in hardcore mode, for example, with HUD turned off, it might be trickier. It'll be interesting to see if the creators decide to address this problem. I much prefer the old solution, with two armies with different uniforms.

I also have reservations about the HUD. Not all elements can be turned off, and some of them are either, awkwardly placed or take up too much space  especially the huge banners at the top of the screen that inform you of the progress on capturing/defending a particular point. Combined with the strongly distinctive colors, it gets in the way a little bit. I'd prefer more discrete versions of these pieces of on-screen information. 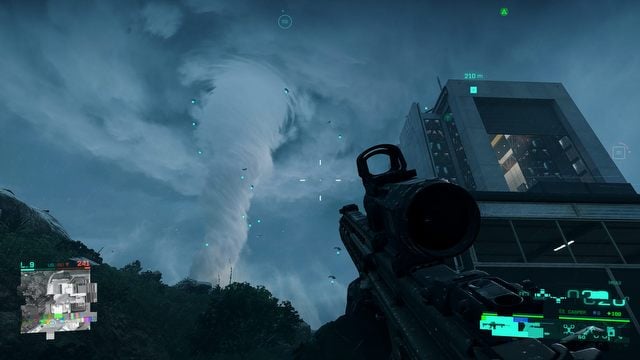 The destruction of the environment is here. As long as you only mean walls.

The return of the king?

I admit that just as after my first encounter with the full version of Battlefield 5, I was completely unconvinced. In the case of Battlefield 2042, however, I'm already sure that the beta is just the beginning of my adventure, and I'll certainly spend a lot of time with this installment. During the short session, I found everything I liked so much about BF 3  and that's not all, because we're also getting the some of that game's actual content. I only pray that the technical condition of the final game will not cause problems and that the servers will not be overrun by cheaters. If the developers manage to get it all right, I have no doubt that good old Battlefield will return in full, even more beautiful glory and reign supreme once again.

I've known the Battlefield series since the first installment in 2002. The story that stuck with me the most was Bad Company 2; I spent the most time with the Vietnam add-on for that game, as well as with part three. Battlefield 2042 promises to bring back everything I appreciated about BF. I'm hoping that the modern battlefield atmosphere and content from BF 3 isn't everything we're getting, and that maps and units from BF Vietnam will be added to the Portal mode. 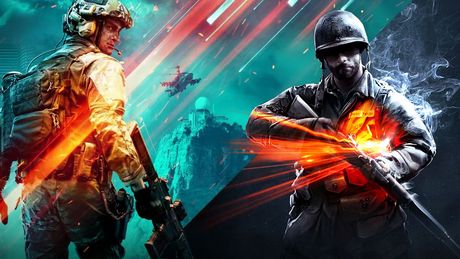 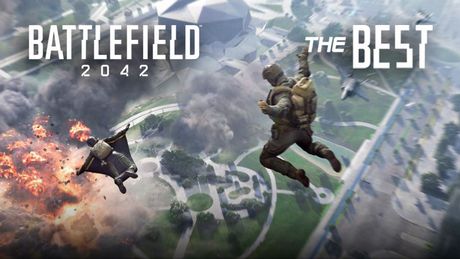