Fans of realistic shooters had very few reasons to rejoice recently. The mainstream of AAA game franchises offers simplified gameplay revolving around perks, skins, unlockables, and promises of more of the same in the form of paid DLCs. If youre looking for realism and tactics, there are basically two options: the somewhat unique third installment of ARMA and the few months old mod-derived standalone  Project Reality, powered by the somewhat dated Refractor 2 Engine used in Battlefield 2. Thus, indie developers, apparently as a group of ardent fans of tactical gameplay, stepped in trying to save the day. With Kickstarter backing them, they can now develop projects capable of satisfying both them and those more demanding players. Flickering somewhere far on the horizon, there is GroundBranch and its unique control system, but it is still years away. Squad, on the other hand - the spiritual successor to the abovementioned Project Reality  is a much more advanced project. Developed by the team responsible for the famous Battlefield 2 mod, Squad is an online tactical FPS focused around small teams, where communication and cooperation are the key to completing mission objectives. Its basically a new, better version of Project Reality that retains all of its best features and tries to develop and/or implement additional ones using the new capabilities offered by Unreal Engine 4.

The version of Squad that was made available on Steam a few days ago is an alpha, which means virtually anything can change before it is eventually released. Hence, all comments and remarks appearing in this text were made with the current version of the game in mind. We begin with the good news: for an alpha, the game contains a surprisingly small amount of noticeable bugs and technical issues  Ive noticed only some small glitches, such as weapons vanishing in soldiers hands. The game can boast very nice, expressive visuals that held a frame rate between 50 and 60 fps on ultra settings on my GTX 970 with i5 4690, albeit some players reported more significant fps drops in some areas while using AMD cards (the issue has been solved, and the solution can be found on the Internet  editors note). Still, my experience reminded me more of a limited demo of the final release than a bugged Early Access version. 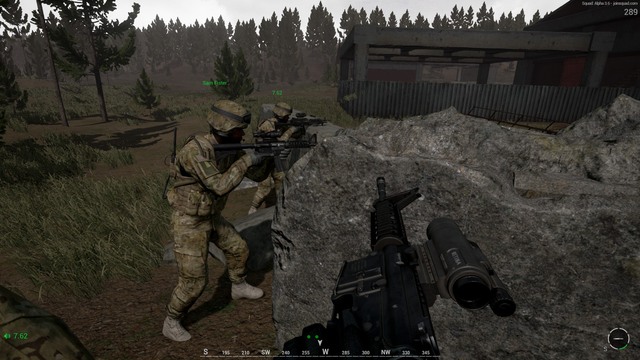 Scanning the area from behind a safe cover.

Squad without a doubt aspires to be a realistic shooter, and in many aspects it is. Except those are not advanced combat simulator levels of realism - ones that would overshadow the fun and scare away the newcomers. On one hand, we have the ever-present friendly fire, no hit confirmation, no enemy identification, real ballistics, weapon recoil, limited ammo, and slower reloads, on the other, the game marks your teammates if you aim the gun at them and offers real time positioning of your team members on the map, as well as their walking direction. This can, and most likely will, change, as soon as the gaming community notices the games full support of user modifications, but in its basic version  if we accept the games different pace and priorities  Squad appears to be gamer-friendly from the moment we step onto the battlefield. Finding your enemy seems to be the hardest part. Firefights typically happen over long distance and sometimes you fire at a bunch of pixels  a location estimated based on where the enemy tracer rounds are coming from  or simply in the direction you team leader points you at. Sometimes, the enemy kindly reveals his position with a smoke grenade, but lets face it: you will get killed by bullets from nowhere. A lot. 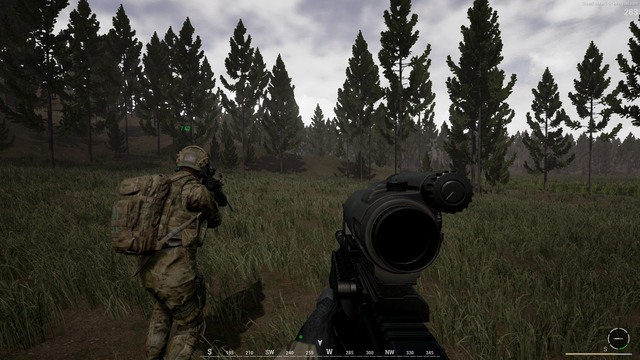 If the squad leader did not set a rally point, you will need to walk quite a distance to reach the area where a firefight takes place.

Is microphone mightier than a gun?

Is voice communication indispensable to play Squad? Not exactly. Well, there are things that can be fully experienced only using the microphone, obviously; especially in such a cooperation-focused title. Having a mic will certainly improve your efficiency, but with a few dozen of players on each side theres always someone who doesnt have one or is less than keen on conversations. A team on the battlefield can have up to 9 members; among them, usually 3 or 4 are satisfied with simply listening and following orders. Occasionally, you can see curiosities like a team called MicOrGTFO! or a team of solo players who dont bother themselves with talking and just do as they please  in such cases I suggest you steer clear and find yourself some other companions. To be honest, its good to plug in your headset during the game, as most of the people you meet are nice and often very enthusiastic. Furthermore, when everybodys beginning to get a grip on the military jargon ( Contact  north east! Covering fire! Copy that), it can be a truly marvelous experience! Squad features a very intuitive communications system: one key is responsible for internal communications in your team, the second one broadcasts your voice over a 20 meter radius, making it audible to everybody in that range, including members of other teams. The squad leader has an additional comm channel, allowing him to speak with other team leaders and coordinate actions between squads. And I think thats the essence of battlefield cooperation in this game. The voice of a single rifleman is not as important as the voice of a good squad leader who constantly informs his team members of the plan, gives clear instructions, exchanges information with other teams, or simply ensures that the atmosphere in the team is friendly. I took part in several battles as a member of the same, single team, and we had several squad leaders, depending on who was faster to pick the position, and believe me, I felt the difference. 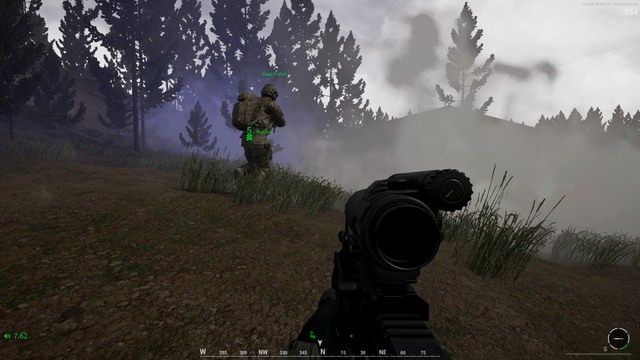 Smoke grenades play an important role in the game, and the way they work is presented perfectly.

or a good trench shovel for that matter?

The job of a squad leader offers some additional capabilities unavailable to other classes. He or she can set up rally points and forward operating bases (FOBs) on the battlefield. In such points, the team can build covers or fortifications using shovels, time, and resources that have to be carefully monitored. Medics, which can get us back on our feet after getting shot, are another indispensable part of a good team. Gunshot wounds often render us incapacitated, and if you get patched up by a medic, your team doesnt lose a ticket  each team has a limited supply of those. Each class has a first aid kit, but its usefulness is limited to stopping the bleeding. Other classes include: rifleman, support gunner, AT-specialist, grenadier, and dedicated marksman in some teams. However, each class has a predefined set of weapons and equipment, and due to the current game limitations we can only pick a class from the ones that are left unassigned and not whichever wed like to. Which, when thinking about the typical range of firefights in this game, often leads to situations. I.e. when playing as the US Army, youd like to be the rifleman that has a weapon mounted with 4x scope in his hands. The problem is, the squad can only have two of those. 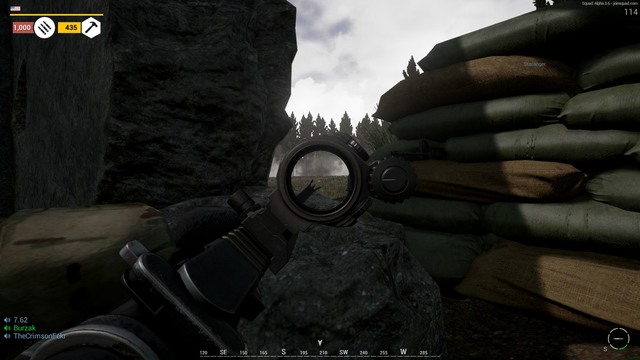 While shooting, its worth to expose yourself as little as possible.

Other than the USA, the game features Russian Federation forces, militia, and Middle Eastern terrorists. Although the non-State forces have no specific names, it takes no more than a single glance at the available maps, based on actual geographic data, to recognize that Squad takes us to the Russian Federations east-European neighborhood and to Afghanistan. The battles, sometimes lasting for an hour or more, are fought over flags, specific areas of the map, or weapon storages. Each mode requires creativity when it comes to both offensive and defensive tactics, and sometimes we wont even get the chance to fire a single shot. Frag count is the one thing that most definitely DOESNT matter in Squad (the number of your kills is shown only after the match is over and cannot be checked during a round), rendering experience gained during typical team deathmatches useless. 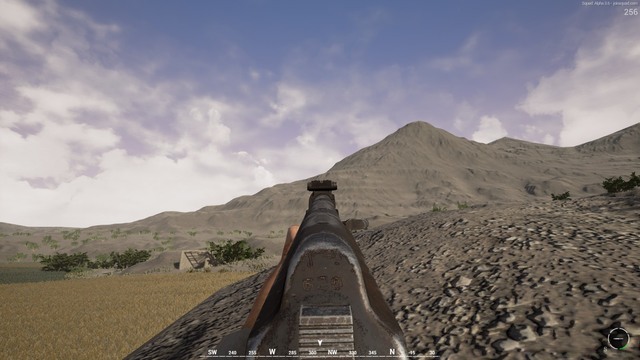 Yes  on that mountain there is an enemy and were shooting at each other.

There are many like it, but this ones mine.

Still, when it eventually comes to the firefight, its an amazing experience. The first thing I noticed was how closely everything resembles the authentic combat footage from Afghanistan, recorded by soldiers themselves, which can be found on the Internet. A small squad crouching behind a short wall, spraying short bursts of fire aimed at a mountainside or some distant buildings, unending staccato of gunshots and shouting combatants. The maps based on the Middle Eastern setting look exactly the same as their model: same vegetation, architecture, firing distance, sound of gunshots  only the voices of players are much more calm. Weapon recoil reminds you why single or burst fire are the most preferred options, when you feel the force of each shot. Indeed, the feeling of shooting was recreated almost perfectly in virtually every aspect  beginning from the great reload animations, through sound effects, to the look through the aiming sights or the aforementioned recoil. The smoke grenade effect is formidable; the smoke cloud doesnt disperse for a long time, when moving through it we get the feeling of walking like in a fog, and when observing from afar, we can see how it irregularly changes its shape and density. Now, lets add lots of reports on enemy positions, gathered in real time and constantly updated by squad members armed in binoculars or scopes, the screams of wounded people desperately calling for a medic, and there can be no doubt that each skirmish is an experience both highly engaging and full of excitement. 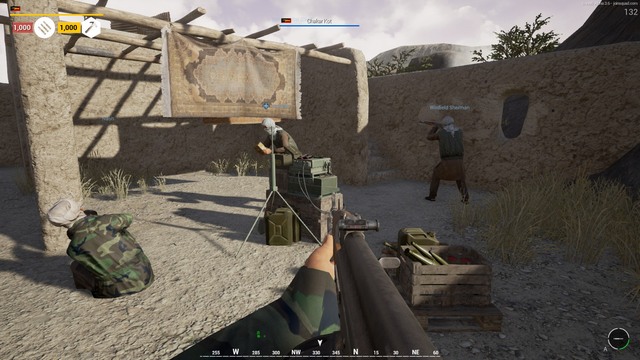 The fighters made a Forward Operating Base in the backyard of one of the houses.

I have to admit that those few battles I fought in Squad provided me with more fun, raw emotion, and satisfaction that any part of ARMA, even with mods. Squad is nicer, more user-friendly, and more intuitive  you simply play and fight, instead of focusing on the crude interface or the numerous crouching and crawling postures available. The only noticeable drawback are the occasional glitches  getting stuck in nooks and crannies, clipping, and hovering. Theres no climbing animation yet and the jump animation is a bit stiff  when climbing a ladder, our character simply levitates up. Still, lets not forget that the game is an alpha; ground vehicle implementation is on the way and we should see them introduced in the near future, followed by tanks and attack helicopters in the long term. I expect the developers to make the best of the experiences they gained when working on the mod to Battlefield 2 and keep the whole thing balanced  namely prevent vehicles from overshadowing the infantry, as Squad is doing just fine even without vehicles. The game should satisfy every ARMA fan out there, and if the graphics of Project Reality were too crude for you to care - that excuse is now invalid. I believe that with the alpha build of Squad, its creators have proved to be worthy of your support. 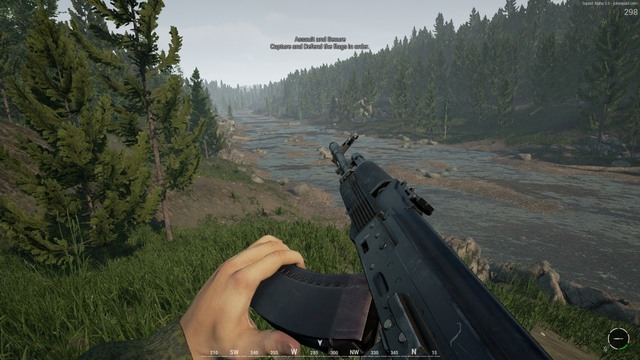