Squad is a tactical FPS that puts special emphasis on cooperation and teamwork. The game was developed by the creators of Project Reality - one of the most popular Battlefield 2 modifications. This title was intended as a commercial sequel to that mod, however, after a breakup in the studio, most of its members turned to development of another, more ambitious production.

Despite the turmoil, Squad stays true to the original premises of Project Reality. The developers wanted to make a game that was something between action shooters like Battlefield and realistic military simulations akin to the Arma series. Therefore, the games landmark feature became realism, evident in e.g. limited HUD information, advanced ballistics, significantly longer line of sight, as well as authentic bullet range and stopping power. The game features a more realistic health system and a score of elements designed to slow down the pace of action (e.g. longer reloading times).

Combat takes place on large maps of up to 16 square kilometers. Up to 100 people can play together simultaneously, fighting for two rivaling factions out of several available (e.g. the U.S. Army and terrorists). This creates an impression of realism of battlefield, where teamwork is essential, although each player handles a different offensive or defensive task. The developers offer a wide arsenal of weapons, as well as drivable vehicles, such as tanks, armored personnel carriers, planes, and helicopters. Moreover, squad leaders can shape the battlefield e.g. by constructing all sorts of fortifications.

From the technical standpoint, Squad is powered by the Unreal Engine 4, able to provide high quality visual effects. It is noteworthy that all in-game weapons were recreated with utmost attention to details, as were the soldiers' uniforms and equipment. 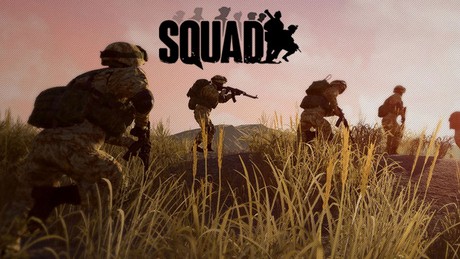 Squad  a tactical FPS and spiritual sequel to the famous Project Reality mod was recently made available on Steam Early Access. Despite being an early alpha, the game proves itself to be quite playable and glitch-free.

A crowdfunding campaign was launched on Kickstarter for Squad, a realistic FPS in a modern warfare setting. During the first 10 hours, the developers from Offworld Industries managed to raise over CAD 60,000.

Project Reality Creators Squad just got a bunch of new features and improvements. See what the developers worked on in July.

Squad will be hitting Steam Early Access on December 15th. Once this tactical shooter from the creators of Project Reality mod for Battlefield 2 arrives to Steam the game will be offered for $39.99.

Early version of Squad is going to arrive at Steam today. The tactical online shooter from the creators of Project Reality mod for Battlefield 2 is going to remain in Early Access for about a year.

Squad, a first-person shooter by Offworld Industries, has received an Unreal Engine 4-powered editor that lets the players mod it.

Details regarding Alpha V7 of Squad  a tactical shooter based on Battlefield 2s Project Reality  have been deployed. Long story short: vehicles rolled in to the battlefield.

The sales of Squad, the tactical FPS, have exceeded one million copies. The game has also received an update with new content.

Squad's over four year-period of early access is over. Yesterday the full version of this tactical FPS debuted. Edition 1.0 brought a lot of news, including a map, additional faction and 100-person servers.

Offworld Industries prepared an extensive content update for Squad players, which will enable us to use new weapons, on a new map and with freshly added vehicles. The title has also been more thoroughly optimized.