Auxiliary power unit engaged, MCDU flight plan completion, engine start, taxi clearance... Can lying on your couch with a pad in hand feel like piloting a giant Boeing 747? Microsoft says it definitely can. Almost a year ago, the launch of Flight Simulator 2020 on Xbox Game Pass made the flight simulator genre flourish once again among casual gamers and the industry media. What's even more interesting, the game will make a debut on consoles next month.

Expected release of the game on Xbox: July 27 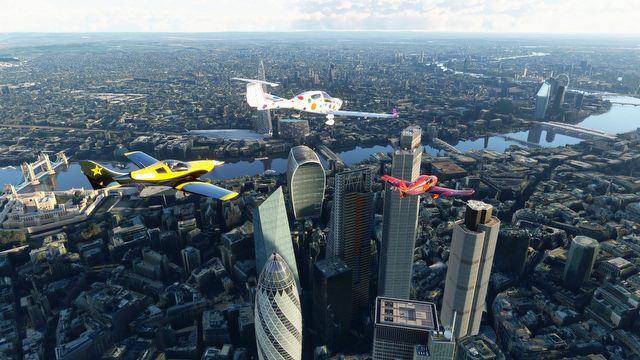 Low fly-bys over photogrammetry-created metropolises will be a true test of the Xbox Series X capabilities.

It's interesting because the most realistic, cutting-edge flying simulator will be released on a platform that so far only flirted with flying in games like The Crew 2, GTA V, or, at best, Ace Combat 7. The developers from Asobo faced not only the challenge of figuring out the controls of a myriad of switches on a simple gamepad, but also of making the game appeal to the regular player  regular in a much broader sense than when the game launched on PC.

Although the sheer number of assists and facilitations was awe-inspiring from the beginning, the game modes (and the way they were implemented) were arguably prepared with veterans of the genre in mind. There was no career mode, no progression systems, and the layman mostly saw in menus boring VFR navigation lessons, a long flight over the Balkans, and a series of challenges with landings already requiring considerable skill. The first, more technical problem with the console Flight Simulator will likely remain a mystery until the game's released. However, we know a bit more about the gameplay, and it seems that the developers have ironed out some aspects of it. 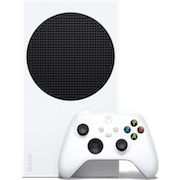 THE MOST POWERFUL CONSOLE... IN THE WORLD  AND THE MOST DEMANDING GAME

The release of Flight Simulator on Xbox will be quite a test of image for the platform that Microsoft likes to call the most powerful console on the market. The work of Asobo studio is probably the most hardware-intensive computer game out there, one which gives your system a run for the money just by being launched. We're very curious to see what the level of detail will look like, and how stable the animation will be. For now, we've only learned that the game should run at 30 frames, or slightly faster, on TVs that support VRR (Variable Refresh Rate) technology. Even more interesting will be the game's performance on the toned-down Xbox Series S. Can this version even handle it? 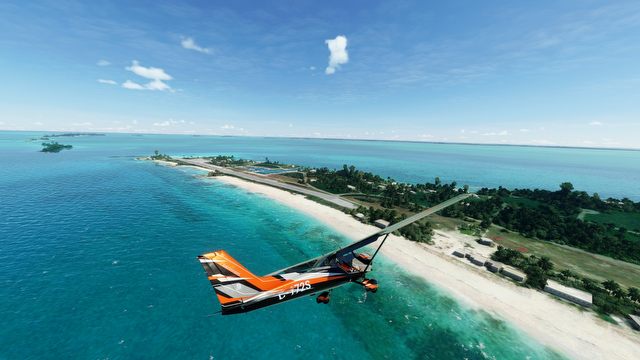 Exploring the world is supposed to be a lot easier and more fun.

In the skies around the world

The first thing pretty much anyone does in Flight Simulator is flying over their own home, and then to some iconic location on the globe (since the game brings access to literally the entire world). The authors take advantage of this practice and introduce the Discovery Tours, or scenic flights over well-known tourist attractions. Instead of looking for such places on the map and laboriously setting the routes, we can now just select the appropriate place from the menu to instantly find ourselves over the Manhattan, the Pyramids of Giza, Mount Everest or Bora-Bora.

It's a great idea and will certainly save newcomers some tedious tinkering with the game's interface, but it's also a little strange that only ten such trips have been proposed. Why not add more of these since all the systems and menus are already in place? I really hope that the creators will regularly and frequently add new locations, because ten can only suffice for so much time. A cool addition to Discovery Tours will be names of all significant places and objects in the world, i.e., rivers, mountains, towns, etc., marked on the screen  very educational. 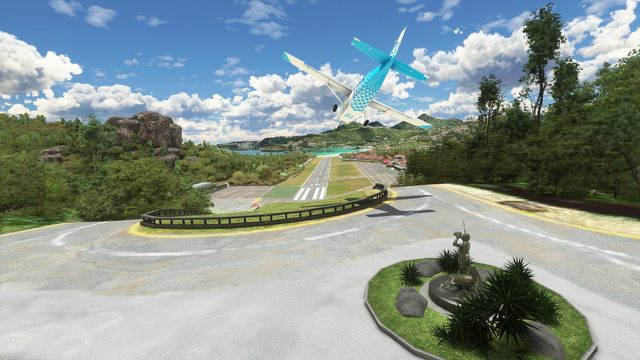 MFS lets you fly to many unusual and famous places, like the extremely dangerous Saint Barthélemy airstrip. It's a shame that it so poorly informs you about the curiosities present in the game.

Note  this flight will be rated

Flying, while very simple at its core, is usually rightly associated with a lexicon that's completely incomprehensible to the layman, and a myriad of safety-related rules. Preparing good flying lessons is therefore a huge challenge, and there is no denying that those available at the premiere of MFS 2020 were far from perfect. The developers themselves also noticed this and reworked the entire tutorial. Instead of 8 training missions, there will now be 22. They are meant to be shorter, but more specific, so they should better explain some of the key points.

The biggest novelty, however, will be the system of evaluating our actions, awarding an appropriate mark for each decision and its execution. It is meant to be a motivation to improve your knowledge and skills by repeating the trainings until you have done everything perfectly. Something similar was already available in the series of rough landing challenges. Perhaps the new tutorial will actually work as a good knowledge fixer and won't just be a one-time affair to tick off missions. I am also hoping for more lessons related to passenger aircraft.

WHAT TO FLY WITH?

Flight Simulator will certainly make the most of the garden-variety Xbox controller, and the console also allows for mouse and keyboard support. The list of compatible joysticks isn't very long at the moment, but major manufacturers are expected to release brand new models just for Xbox soon. For now, the following devices will be compatible:

Hey, Siri  take over the plane

Other improvements are related to artificial intelligence assistances. At this point, the AI can start the aircraft, handle the exchange of radio messages with the tower, or take over the controls and fly according to a flight plan. The Xbox version will expand this feature significantly. There will be an option to fly to the nearest point of interest in the world to focus on relaxed sightseeing. The AI will also be able to land for us at the nearest airport.

And with a desire to hone your piloting skills, much more discreet assistances will come in handy, such as keeping an eye on the proper trim of your aircraft or automatically exiting a stall if you run into trouble. The AI window will also display details such as the suggested approach speed for takeoff and landing, and enable the inclusion of destination guidance, both in flight and on taxiways. The latter option has until now been deeply hidden in the menus. 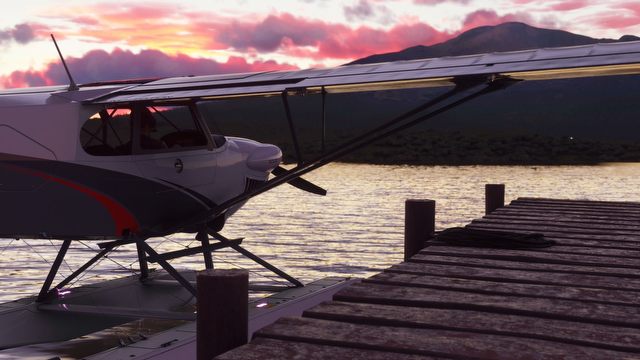 Through snow, sand and water

The last new feature is directly related to the fleet of available aircraft. The new "land anywhere" feature will allow you to explore the corners of the globe even more fastidiously by landing wherever you want  according to the landing gear of the machine, of course. Fear not, however, because some planes have been furnished with floats or skids instead of traditional wheels, making it possible to land comfortably on water, snow or desert sands. You will no longer have to create a route from airport to airport  instead, you'll be able to make stops wherever you want. The trailers also showed new species of animals that you can see on the ground, as well as particle effects produced when the plane makes contact with the ground. Is this a result of switching to DirectX 12? That's something the creators haven't revealed yet. 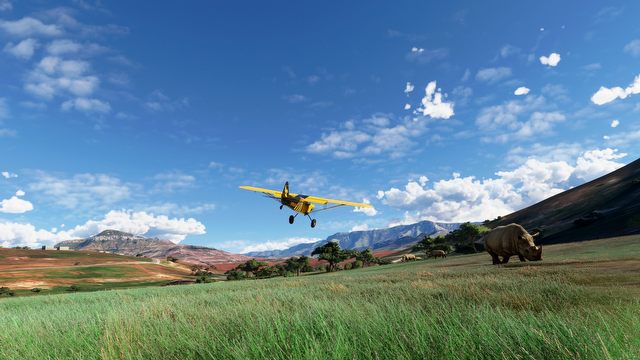 The wilderness tour will be enhanced by new animal species to look out for from the air. 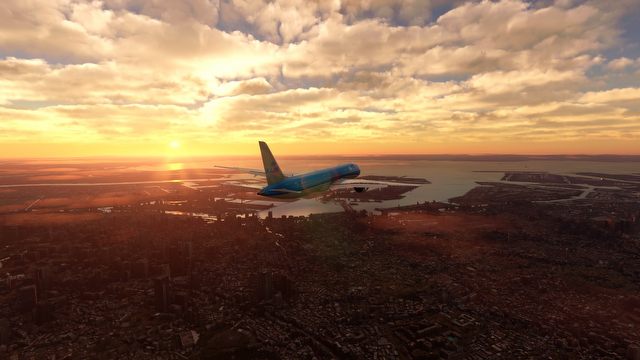 It's a pity that the developers didn't try something like an airline pilot career mode.

Console convenience or the wealth of mods?

The authors often say that Microsoft Flight Simulator in the Xbox version will not be dumbed down in any way. It's supposed to be the same experience as on the PC, only (even) more accessible to beginners. You can believe them here, because in fact, MFS 2020 isn't hyper-realistic. It's a big sandbox, sure, and all the conditions for a hardcore experience are here, but the handling of the planes itself is greatly simplified, especially when it comes to large passenger carriers. The creators openly admit that they leave room for other companies and their products, and fan-made mods also do their part. 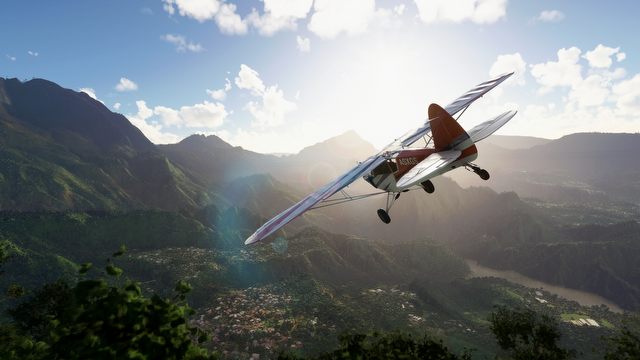 A couch, a pad, and views like this! Flight Simulator 2020 might be one of the most relaxing Xbox entries out there.

And here I see the biggest pitfall of the console version  the lack of many great, free, yet unofficial mods available on PC. Xbox will probably miss the awesome additions such as gliders and helicopter, and flying over to traffic accidents. There will be no apps that allow you to play a career mode or take care of passengers on long flights (with an evaluation of the entire flight). It's a bit of a pity that, seeing these invariably popular trends in mods, the authors didn't prepare something like a campaign mode with a career at the onset.

The console version, however, may be the cheapest way to start your flying adventure, given current prices of PC parts. Here, however, it all depends on how the game performs on Xbox X and S. And then, there's a mysterious surprise from Asobo, which is supposed to delight simulation and gaming enthusiasts alike. Is that going to be a career mode? I'm hoping that from July, the game will start to be supplemented with more than just improved locations in subsequent countries. 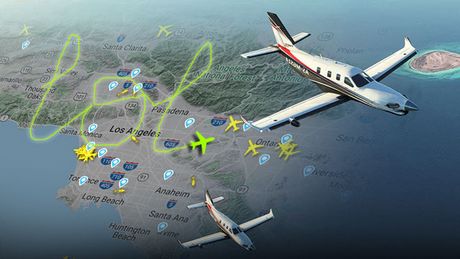 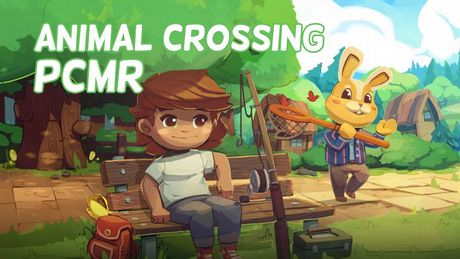 Hokko Life is a good game and a great copy of Animal Crossing. Unfortunately, it doesn't try to be original in any way. 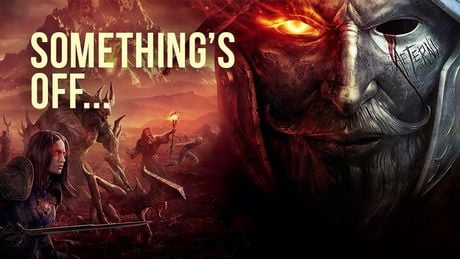