Minecraft Dungeons will be released at the end of May. It won't be free, there's a minor DLC already announced, and I took the opportunity and placed three pieces of paper horizontally on the craft table. The ticket thus created gave me access to closed beta and a chance to see what Mojang is actually brewing. The result surprised me quite positively  with one but...

Minecraft is no doubt a massively popular game. It changed the industry, found millions of fans around the world, and spurred the cult of voxel graphics. Hence, it's not very surprising that the developers decided to create a new production based on the popular franchise. They opted for hacknslash  a genre dominated by Path of Exile, and Diablo III. How does Minecraft Dungeons fare against these, rather significant games?

After my adventure with the beta, which lasted no more than two hours, I'm convinced that it fares pretty well, mostly because we're dealing with an extremely casual dungeon crawler. If you've found Diablo III rather simplistic, perhaps even facile, imagine that Minecraft Dungeons is even less complex. And it is by no means a drawback  provided you aren't looking for a souls-like experience. 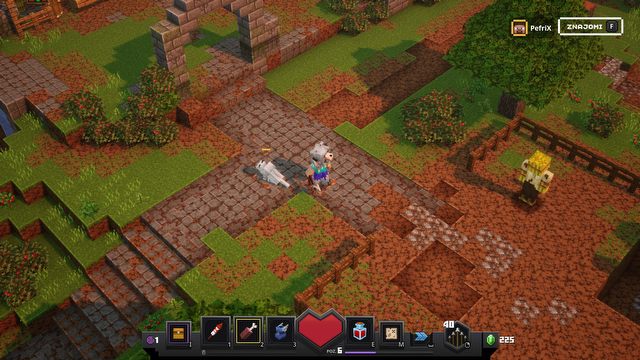 Me and my mate Sven  time for a YouTube series?

As concerns the world of Minecraft itself, it is rather well developed. The graphics look better than in the original, but they retain the trademark style. The opponents we meet are all mostly taken straight from the original, but I also came across some more unique creatures. We, in turn, become a classless character with the appearance assigned to a chosen skin  in my case it was Steve, the default Minecraft character.

The fact that Minecraft Dungeons features no class system is an interesting solution that doesn't feel limiting at all. The equipment yields specific statistics, and artifacts provide extra skills. In addition, items feature additional bonuses, in which we can invest the points we obtain with each new character level. If we find a better weapon, we can simply destroy the old one, reclaiming the points so that we can choose different perks. This provides a great flexibility and lets us reinvent the character often.

The beta only offered one difficulty level with some variants. I had access to a pretty modest number of items and related skills, but I also got the sense that no one should complain about lack of variety. Some of the equipment was definitely more appropriate for a classic tank, some of it to a melee warrior, or to an archer, and there was also room for support abilities. 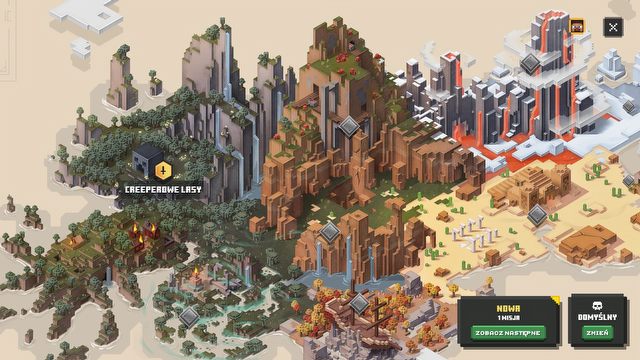 The latter is all the more important because Minecraft Dungeons is clearly a game designed with co-op in mind. Of course, we can play solo, no problem, and there's even a story with an antagonist who wants to take over the world, but it's just an excuse to decimate more zombies, skeletons and creepers. What I failed to comprehend is that there's no crafting in this game; but maybe, since there's no mining neither, I ought not to be surprised. Another weird decision is that we can only spend money at sellers in the base, buying only packs with random equipment matching our level, to make it even more questionable.

See that? Isn't it untapped potential?

It's hard to make any definitive judgement about Minecraft Dungeons after seeing so little of it. The final score is still hard to predict. After all, there's still some time left until the end of May, and Mojang will certainly want to make the most of the time. And I presume there's a lot to get done  after all, we're supposed to get a procedural world here. There will be some elements that will be constant in order to keep the story together.

But I get the feeling that something was lost along the way. In just over three hours, I repeated the two available maps numerous times, on different levels of difficulty, and it largely felt like running in circles, like the procedural-generation was only partial, and very limited. And it was all pretty empty, so that I didn't have many chances to fight.

I also regret that you can't destroy or damage the environment in any extent, which I think would fit Minecraft Dungeons perfectly. The levels are practically begging to be torn a bit. Instead, we can roll by pressing space. It will be used to search for secrets on maps and, occasionally, to fall down precipice. But since everyone has a few totems of immortality on them, reaching a definite game-over will require some effort.

Minecraft Dungeons is a fun game, but definitely not for everyone

Minecraft Dungeons looks like another great game for kinds, but not only them. I am convinced that the graphical style will also appeal to older players, and that the gameplay formula created for relaxing couch sessions, will find supporters of all ages worldwide. But don't expect bells and whistles  everything is simple and easy to understand, which in the long run can be tedious for some people. 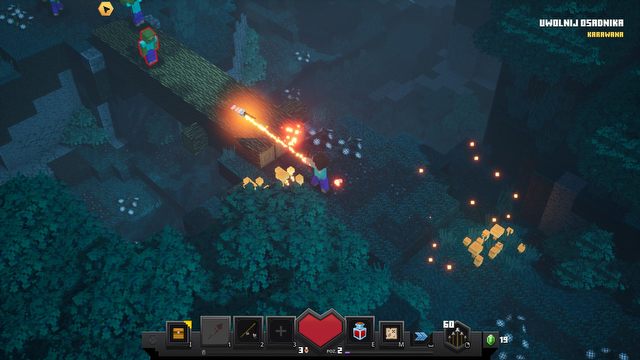 Take that you filth!

I can't really imagine anyone spending hundreds of hours in this game, but then stranger things have happened. It's a love letter to the casual player, but there's nothing wrong with that. Despite all my whining, I think it's a decent hack'n'slash that you can definitely recommend to kids that saw their uncle playing Diablo, Grim Dawn, or Path of Exile  the very names of which aren't appropriate for children! By contrast, Minecraft Dungeons sounds amiable, doesn't it? And that's all this game seems to be  a charming piece of code. Although who knows, maybe Mojang will surprise us and the full version will show some teeth!