The presentation began with a demonstration of the game engine’s abilities, and I have to admit: never before have I seen world creation as easy as playing with crayons. The builder, like Photoshop, works on layers, and all we have to do is to pick the right material, be it grass, rocks, trees or other, and coat the surface until we achieve the desired effect. Adding a second layer increases the effect, for example, adds density to the grass. Aquatic design is just as easy, but we can determine the wave height (from creek-sized to lake waves to raging white horses) as well. Additionally, the user friendly modding tools, which are to be released on the beat with the game, should encourage beginners to try their hand at creating original levels and expansions. 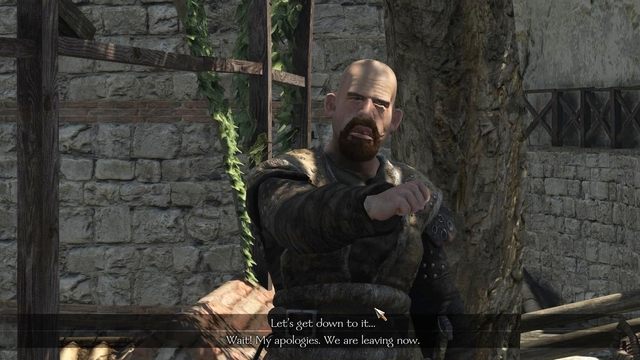 The new engine offers a dynamic weather system, including the seasons! Season changes constitute to more than just changing the color of decorations – they have a significant impact on gameplay and your men. Freezing temperatures will reduce the combat prowess of your soldiers and deep snow will hinder their movements.

Benedict Cumberbatch with an axe

Our adventure begins on the slightly upgraded character creation screen. This time we can edit almost every element available of the character’s face, which is much more detailed than before, or choose one of the random settings. The face editor offers rather impressive capabilities; so impressive, in fact, that the developers could afford to recreate the faces of some prominent celebrities, including Benedict Cumberbatch or Arnold Schwarzenegger, who promptly became our „guide” through the demonstration gameplay. The tedious, repetitive, and anything but welcoming tutorial featured in Mount & Blade: Warband is a thing of the past. This time we can expect something more vibrant and much more engaging. 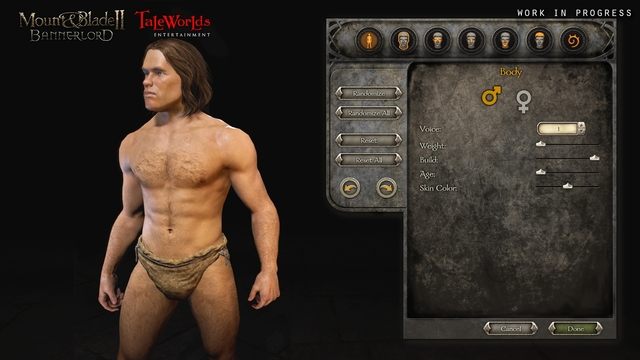 The sandbox in Bannerlord will be accompanied by a plotline set during the fall of Calradian Empire, but it won’t be forcing us to focus exclusively on that. Storyline quests, and even some side quests, will provide extensive, multistage missions focusing around several characters; this includes choices and alternative endings resulting in gaining some reputation here, losing some over there and so on. Quests are available in taverns or from NPCs that happen to be around. Each of the characters we may recruit as our companions will have his/her unique back-story and a profession, like engineer or physician, which may determine the fate of your party at some point. One more thing worthy of mention – our companions will have all of their dialogue lines recorded. 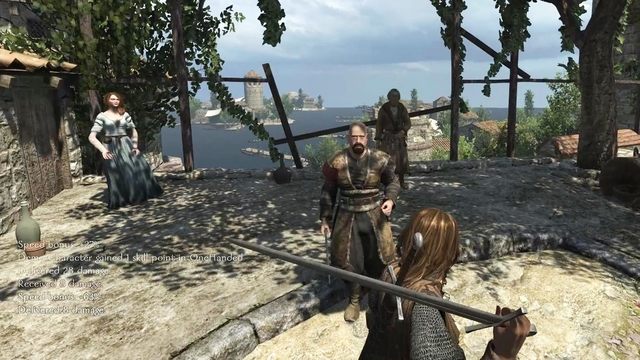 The creators were proud to present their autonomic trade system, which is said to recognize supply and demand on the market. If, for example, our farm produces a hefty amount of food, it can sell the extra rations to the nearby castle; the castle will then trade with other villages in the area. As usual, we can control the tax administration of our estates, order the men to build a sheep cottage or a castle (take note, castle takes time) or to train some militia. Remember, however, to tread lightly since a few no-so-good decisions can quickly turn your subjects against you.

When you enter the town, you will see its residents, tending to their work. Yes, the population of the cities has increased significantly, but not enough to be described as vivid. The numbers may be there, but the residents look awfully apathetic and indolent when they carry on with their day-to-day affairs. I was under impression that this particular community was consumed by despair to the point of not caring about anything anymore; including the arrival of their savior. The tavern offers you a chance to play a supplemental mini game, and each of the 6 factions available has its own, exclusive entertainment. 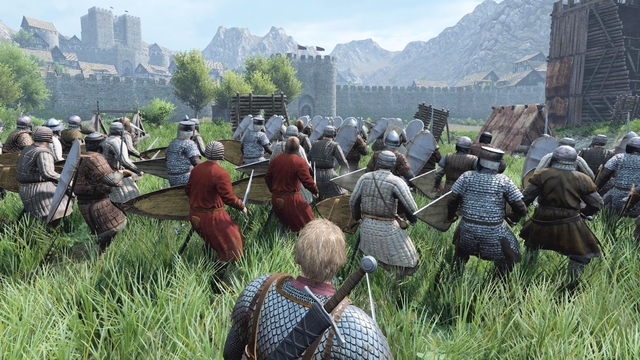 There are four key elements to Mount & Blade 2: Bannerlord: administration, trade, map exploration, and, last but not least, fighting. This installment of the franchise introduces some major improvements to combat mechanics, including the introduction of weapon crafting. We can forge our own blades – like a true medieval blacksmith – and modify the appearance of four elements: the blade, the hilt, the cross-guard, and the pommel. And that’s just the beginning! Every sword will have eight stats determining its parameters, like weight, swing speed, damage or the location of the blade’s center of balance.

All of these stats will have an impact on the combat, but it’s up to us to decide, if we want to fight solo, together with our men or just stay behind and let them do the job. The battles now look much better than in previous installments; the animations have certainly improved, but there is yet some stiffness visible in swordfight animations. Luckily, one of the animators reassured us that the animations are being constantly improved, modified and new combat moves are being added as the team tries to strike the right balance. The moves can be strung into a combo, and the whole battle can be analyzed afterwards, thanks to the handy replay system, allowing us to watch, rewind, pause or change camera view on the battlefield. 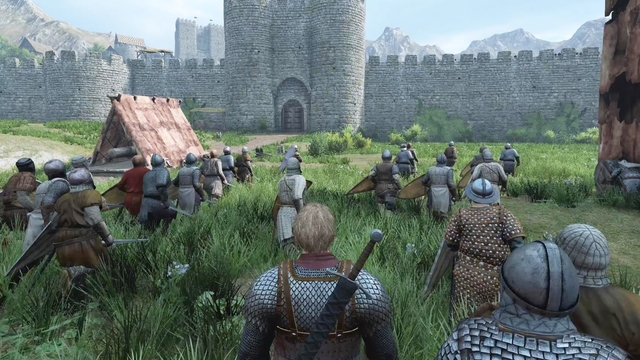 Sieges are a spectacle

The one thing that made the biggest impression were, without a doubt, castle sieges. We may have seen them only on a few short inserts, but it was enough for giant siege weapons, catapults, and rams to make a powerful impression. The picture of dozens of soldiers scaling the walls as others pounded away at the castle’s gates with a giant log truly made my day. All thanks to the improved visuals; the walls now have that indomitable and overwhelming look, while the 3D models of the siege engines appear to possess the power and substance required to tear them down despite that. It is up to us, how long will the siege continue. Should we begin with a full infantry assault or should we bombard the castle with a catapult barrage? Perhaps we should go down there, grab the ram, and smash through the gate ourselves? Or, we could just leave everything to the AI. Numerous objects on the battlefield can be damaged or outright destroyed, which will be illustrated with appropriate animation of walls or wooden structures crumbling. This doesn’t have to end that way, obviously. Sometimes, the castle defenders make the smart choice and surrender. 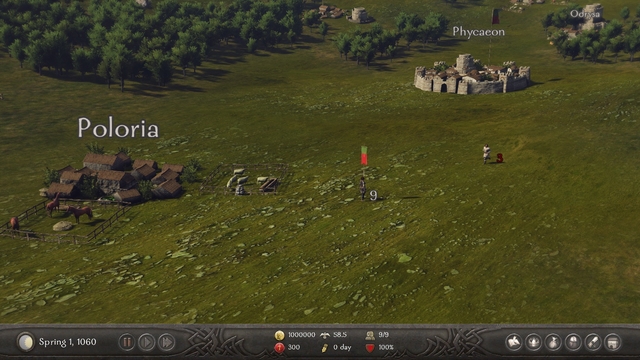 The campaign map is based on the one from Warband, only slightly bigger. You can even recognize some of the old locations from the prequel.

TaleWorlds are well aware of Warband’s shortcomings when they describe it as „unpolished”, „unfriendly” and “hard to get into”. Bannerlord will correct these mistakes; it will be the Warband as it should have been: more dynamic, engaging, offering good visuals, animations and plot (optional, for those who get annoyed with imposed rules and would rather enjoy the open world). The game still requires much work and polishing, especially in terms of combat animations or map exploration, but the developers are determined on properly refining and perfecting an already existing and trusted recipe for success. Should they remain true to this intention, even the upcoming Kingdom Come: Deliverance may have trouble posing a threat to them. Their game remains a unique and one-of-a-kind experience, and the best thing we can do now is to keep our fingers crossed. 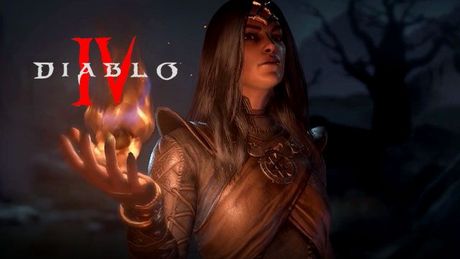 According to our users, Mount & Blade II: Bannerlord for PC was a disappointment - the expectations before the release were higher than the current average user score.