What Total War is, everyone can see. "All Quiet on the Western Front," "you'll instantly feel at home in this game," "Total War never changes." Yep. You should now get the idea  the new Total War is... just another Total War. But since it's completely not surprising, we can now cut to the chase.

Total War Saga: Troy is the second minor Total War after Thrones of Britannia. In fact, in terms of geography, it's actually pretty small. Instead of all of Europe or China, we have just Greece, nearby islands, a large part of Turkey, the Bosphorus Strait and parts of today's North Macedonia and Albania. On the other hand, the map certainly doesn't seem tiny. We can find over 200 towns and cities here, and that's quite a lot.

Greece looks real pretty in the game. Through the azure water you can see coastal rocks, gulls fly over the land, the moonlight is reflected in the waves, and if you zoom in on the map, you will see mountains painted in ancient style as the background. It's definitely a very aesthetically pleasing Total War that feels really nice. This also applies to battles.

This preview is based on an online showcase. First, we listened to what the creators had to say about the game, and then we could play it ourselves from the comfort of our home. 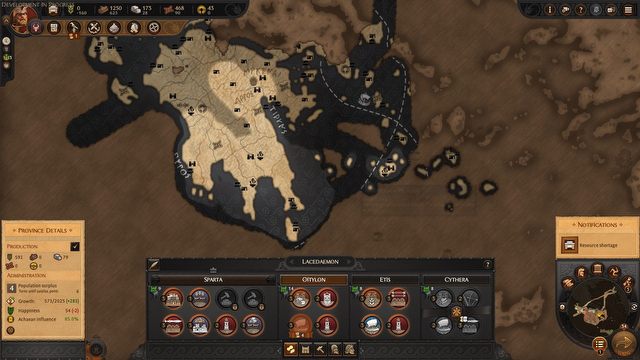 Of course, it's difficult to pick out all the changes in gameplay after jsut a few hours with a production of this scale. Some of them, however, are big enough that you can't help but notice them right away. The most important change in my opinion is a new system of raw materials, namely wood, stone, food, bronze and gold. All of them are vital.

It wasn't long before I was invaded, which spurred me to double-down on developing the army. I did the usual thing at Total Wars: I hired a new commander and started recruiting as many units as I could afford. It soon became apparent, however, that I was unable to feed such a big army.

So, I started issuing royal decrees, building farms, but after a few turns I realized that trading with other factions would be much more viable. So I started to make trade agreements and sell bronze for food. A trade deal can span several rounds, so it's not just an ad hoc measure. And this actually changes the gameplay of Total War in quite an interesting way. 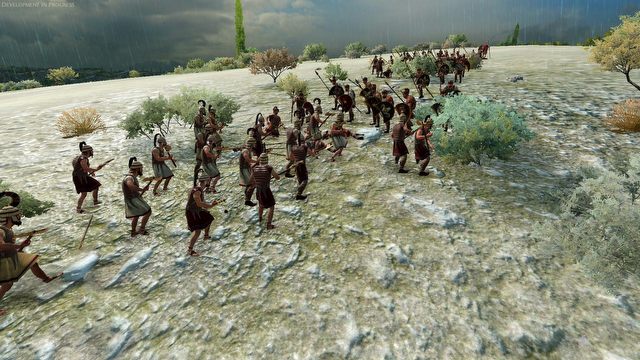 We achieve a great, mythical goal... or not

The game is not just about Greece; it's about the Greece from The Iliad. That means we don't choose from among eight factions, but rather eight heroes. For example, we can play Odysseus or Menelaus.

Each hero has their own goals to achieve, special rules affecting the entire faction, belongs to one of two alliances, and is a powerful character to rival Karl Franz from Total War: Warhammer. That means, among other things, that death on the battlefield is not final and the fallen commander comes around after a few rounds. This arrangement allowed Creative Assembly to retain the quasi-RPG character of the development system from TWW.

More importantly, however, the campaign has a very specific purpose. Depending on the side we choose, we must either recapture Helen, or keep her within the walls of Troy. On the other hand, we can... ignore it and focus on sandbox gameplay in which the mythological friends become enemies and we focus on conquering the entire Ancient Greece  because why not?