Far Cry games are known for following a certain formula. They’re giant open world games that feature lots of shooting, looting, and missions that span exotic locations and often feature a mix of emotions. From zany to dark, this series has tiptoed around political issues but always manages to inject a unique brand of humor that keep things light and not so serious.

A Tale of Yara 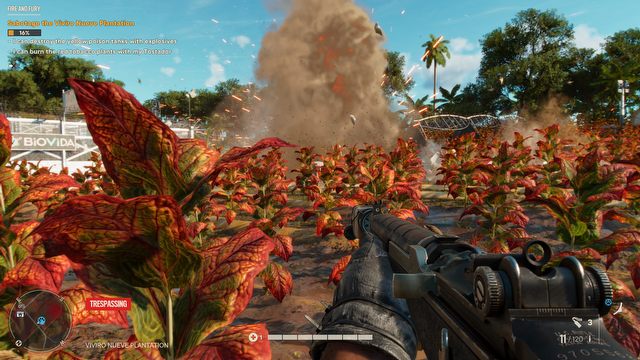 Following in the footsteps of a game that took place in the real-life setting of Montana, Far Cry 6 takes players to the fictional country of Yara, but if you squint and look at all the palm trees and classic cars you will realize it is just Far Cry’s version of Cuba. In fact, it’s Cuba, but it’s not. Its denizens use Cuban slang and phrases like asere, que bola, and singao, but they consider themselves “Yarans”. It’s an interesting feeling to explore a country that’s so familiar to some but yet claims its own identity.

That theme is prevalent throughout the game’s story which follows your protagonist Dani Rojas as he or she joins a band of freedom fighters known as the La Libertad to overthrow the country’s fascist president Anton Castillo. As you progress through its main missions, Dani and the other faction leaders of Yara team up to take down Castillo’s henchmen and gradually weaken his grip on a land that is being exploited and people that are being abused. 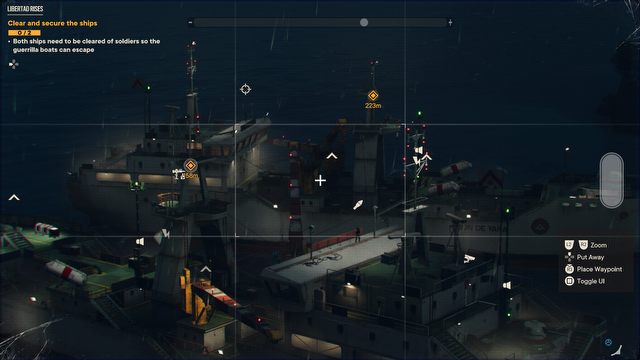 To reiterate, this isn’t Cuba, but a lot of inspiration was taken from the strife of its people clamoring for freedom and doing whatever they can to ignite the embers of change. Unlike Far Cry 5, this entry in the series is unapologetically political and touches on a range of topics from human slavery, LGBT rights, and the exploitation of natural resources for the wealth of those in power. From the moment the game begins, you realize the fight is on, and it never truly ends until the final moments that culminate in a somber conclusion. 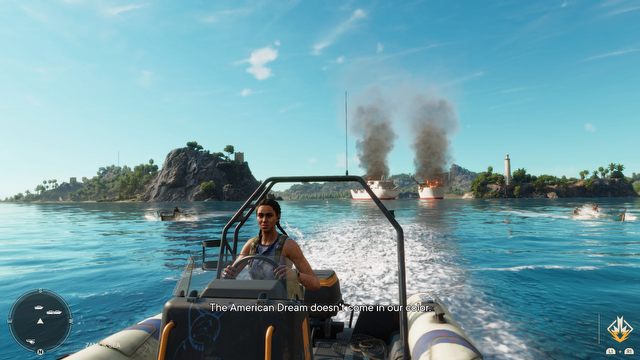 Unlike past games in the series, Far Cry 6’s main story keeps a somewhat serious tone throughout its main missions that put the strife of Yarans into perspective. You will meet an old group of revolutionaries who have doubts about joining a younger group of rebels, a young woman whose brother is tricked into betraying his family by Castillo, as well as various characters who have their own reasons for being against the government. There is even a trans character whose story further echoes the need to be yourself and fight for your freedoms. You spend enough time with these characters in each of the game’s three main regions that you truly get to know them and care for them in the end.

Far Cry games have always had a problem with tonal dissonance as its games felt like they wanted to be taken seriously but had moments of insanity that distracted from their seriousness. Far Cry 6 does a better job of keeping it together, but you will encounter some humor and random wackiness here and there in various side missions. 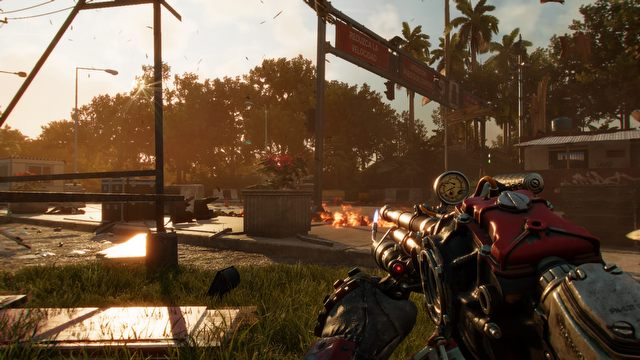 You’ll help a juiced-up rooster go on a killing spree for who knows why, throw yourself off a cliff and glide around in your wingsuit after a doctor suggest you need to chill, and even go out drinking with your compay and save him from a bull after he mistakes it for a dog. It’s not Saints Row the Third-level funny, but its humor is there but luckily doesn’t take away from the powerful themes found in the overall narrative. You can also choose to do these missions whenever you want so you can opt to complete the story and get your freak on afterwards.

Its weapons also sprinkle in some fantasy to your fight for freedom as you can also wield some wild guns that are just plain fun. You can purchase various Supremo weapons such as a backpack of homing rockets or a poison gun that cause enemies to turn on each other. We stuck with the rockets simply because they were so useful in taking down enemy choppers. But you can also unlock other special weapons like a nail gun or a record-throwing launcher that plays Macarena as you are killing your foes. Yes, it’s that kind of game too. 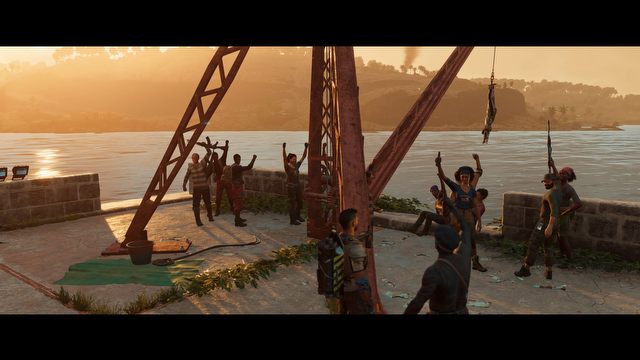 The format of missions themselves range from the usual Far Cry fare and include a lot of the tried and true types of missions from past games. Secure a base, clear an area, destroy gas tanks, steal an airplane, and even an homage to Far Cry 3 that involves burning fields of tobacco plants. Missions try their best to be unique and offer a different challenge here and there, but no matter what you end up doing most of them will involve an ambush. It’s a bit frustrating being a stealthy ninja and avoiding conflict for a good chunk of a mission only to reach its checkpoint and be told that enemies found you out anyway and now you need to kill them all.

These frustrating moments of not having a say in how to complete a mission are only worsened by the game’s combat system that gives you too many things to worry about. Enemies now come in different varieties so some will require the use of armor-piercing bullets to take down or be resistant to fire or poison, for example. You can carry various weapons with you at all times and equip different specs to change their power and ammo type so it’s as if the game wants you to always be swapping out weapons for the best situation. 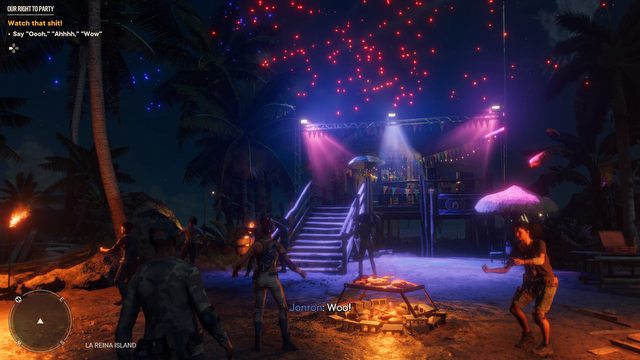 That doesn’t work if you’re being surrounded by enemies from all sides and don’t have time to spend figuring out what kind of weapon they are weak to. Plus, it also takes away from the action to keep going back to your menu to equip a new weapon to your weapon wheel each time.

Instead, we ignored these ammo suggestions just stuck with our favorite guns and simply upgraded their mods when needed – even though this meant mostly using our armor-piercing rifle nearly all the time and using our modded silenced pistol for stealth kills. The extra fuss that the game has you going through to upgrade your weapons isn’t necessary when a well-timed sneak attack or armor-piercing headshot does the trick.

Perks also function differently from Far Cry 5 and now come in the form or armor and gear you can find. Equip a hazmat helmet to lessen the damage from poison, wear this cool-looking face mask to make it harder for cameras to spot you, or – our favorite – put on some flame-resistant gloves and never be on fire again. And because your character actually has lines now and appears in third-person mode in friendly camps, you get to see your fashion choices in action. 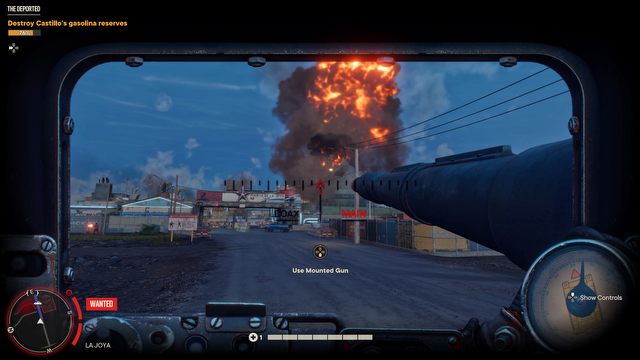 When it comes down to it, Far Cry 6 plays like any other Ubisoft open-world game and is chockfull of content. After you complete its 30 or so hour main story, you will realize you still have a lot to do in the game to fully complete it. You have enemy bases to unlock, platform puzzles to solve for hidden treasure, and side missions that let you unlock companions like a loveable wheel-chair Dachshund aptly named Chorizo. It’s a formula that’s been heavily overdone so if you have played the series before you know what you are in for. There are also co-op multiplayer missions you can complete with others for rewards and a different, separate experience from the main story. Despite how familiar the game’s format is, though, there is enough unique attractions in this entry that may keep you playing long after you beat the story. 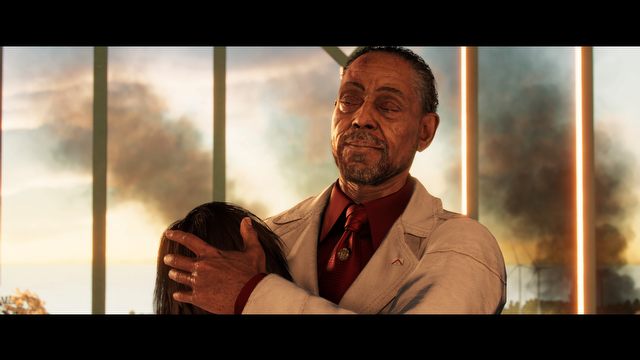 Unlike Far Cry 3’s tropical setting, Yara features cities and towns that are filled with unique touches that bring its world to life and make you realize you are in a Caribbean nation at war with its government. Stray dogs roam the streets, citizens get into gunfights with government soldiers, and yet parts of the island remain untouched and feature lush rainforests and waterfalls. It’s a beautiful contrast that features nearly no load times. We did encounter the occasional clipping issue and some drastic framerate drops during cutscenes, however.

If this isn’t your first foray into the series, then Far Cry 6 may leave you feeling a little exhausted. But if you’ve never played a Far Cry game before, you are in for the ride of your life.

Further complementing the feeling of being in a Latin American nation, the game’s soundtrack just oozes Cuba. From classic salsa on the radio stations you listen to the more modern reggaeton songs, the game features an eclectic mix of sounds that bring it home. Its cast is exceptionally strong as well, and Giancarlo Esposito makes Castillo sound ruthless, vile, but also gives a father-like quality to him that becomes more interesting as the story progresses. Every character has a unique personality, but some are definitely more memorable than others.

Far Cry 6 is a game about a revolution, and its story revolves around this central theme of freedom. Its characters remind you what you are fighting for, and its lush environments tell you what’s at stake. It’s still an open-world game in a series known for its explosions and humor so it will give the feeling of familiarity, if not deja vu, to some. Thankfully, its compelling themes and Yaran charm will keep many players invested in La Libertad. If this isn’t your first foray into the series, then Far Cry 6 may leave you feeling a little exhausted. But if you’ve never played a Far Cry game before, you are in for the ride of your life.

According to our users, Far Cry 6 for PS5 was a disappointment - the expectations before the release were higher than the current average user score.