Far Cry 6 is the sixth main part of the best-selling FPS series launched in 2004. The production was produced in several Ubisoft studios under the direction of Ubisoft Toronto. This studio previously helped produce Far Cry 4 and Far Cry Primal.

Far Cry 6 takes us on a journey to Yara, a fictional tropical country inspired by Cuba. Anton Castillo is in charge. His life's goal is to rebuild the country and bring it back to its glory fifty years ago (when the dictator was his father), no matter what sacrifices he has to make to the people. Besides, Castillo is raising his successor, a 13-year-old son named Diego. The protagonist's name is Dani Rojas, a warrior of the local resistance movement, trying to remove Castillo from power through both guerrilla warfare and bloody protests in the streets of Yara's capital Esperanza.

We start Far Cry 6 by choosing the sex of the character we're playing. We still have nothing else to do but to start the game, during which we observe the action from the first person perspective (FPP). The authors give us a vast open world, which we travel on foot, at the helm of various vehicles and machines and on the back of a horse. We will find here not only the wilderness areas known from the previous parts of the series (headed by the jungle) and small settlements, but also (for the first time in the history of the series) a metropolis, Esperanza.

The game is driven by tasks pushing the story forward, accompanied by numerous optional missions and activities. We are disturbed by our enemies, led by loyal Castillo soldiers, whom we eliminate by making use of an extensive arsenal. Apart from cold weapons, there is a wide range of pistols, rifles and shotguns, which the guerrilla modify with the help of everyday objects (for example by installing sights made of sardine cans). We can deal with our enemies both in open combat and acting quietly, which is all the more important because they often have a numerical and technological advantage over us (enough to say that they have tanks among others). As was the case at Far Cry 5, we're not condemned to a lonely journey. We can use the so called guns for hire (other revolutionaries) or tusks for hire (tame animals like dachshund named Chorizo).

Far Cry series has got us used to the fact that the games representing it have a high quality graphic design. Far Cry 6 is no exception, and you can enjoy a detailed environment, with lush vegetation overgrown with Yara, realistic weapons and detailed character models. In addition, the game has a truly starring cast - Anton Castillo is played by Giancarlo Esposito, known from the series Breaking Bad, while Diego's face and voice is lent by Anthony Gonzalez (Coco). 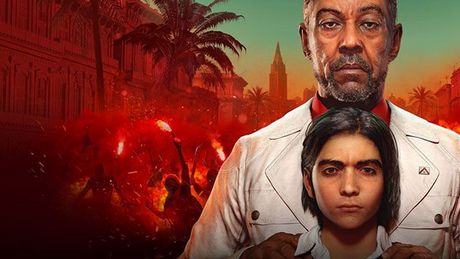 Gamereactor accidentally published an article, which shows that Far Cry 6 will be officially announced on July 12 during the UbiForward event. We also learned from the leak that the actor known from the Breaking Bad series, Giancarlo Esposito, took part in the work on the game.

Hong Kong players have found Far Cry 6 in their local version of PlayStation Store. This gave us details of this unannounced game, including the release date.

Far Cry's official Twitter account published a short announcement of the new installment of the series. We will hear more about it at Sunday's Ubisoft Forward event.

Trailer of Far Cry 6, the latest installment of Ubisoft's FPS series, was leaked, confirmimg some of the previous leaks.

Today, the Ubisoft Forward conference will take place, during which games such as Assassin's Creed: Valhalla, Watch Dogs: Legion, and Far Cry 6 will be shown.

During the Ubisoft Forward show, the trailers of Far Cry 6 were released. We also learned the game's release date and the devs confirmed that the game will not go to Steam.

Ubisoft has released the first screenshots from Far Cry 6, which show that a large part of the action will take place in a city.

Ubisoft has revealed the content and prices of the Collector's, Gold and Ultimate Edition of Far Cry 6. The most expensive variant includes a replica of a flamethrower.

Today, Ubisoft's technical support revealed on Twitter that Far Cry 6 in 4K resolution will only be available on Xbox One X and Xbox Series X consoles.