Hokko Life, from developer Wonderscope and publisher Team17 (Overcooked, Golf With Your Friends), has been in early access on Steam for a little over a year, but the final version is just about to release, along with the console versions of the game. On the surface, Hokko Life resembles the massively popular Nintendo Switch series, Animal Crossing. Especially the most recent entry in the series, Animal Crossing: New Horizons. But looking deeper, well, it actually is still a lot like Animal Crossing. In fact it’s nearly impossible not to draw comparisons.

This is not the game for fans of action-packed, fast-paced blockbusters. Hokko Life is all about enjoying life in a small town, gradually collecting resources, interacting with the animal residents, and expanding the town. The life simulator genre has become a very popular type of game, and it makes sense. In what can be crazy times in the real world, it can be nice to escape to a small, manageable town full of friendly faces.

Animal Crossing: New Horizons was released on the Switch just as the world went into lockdown during the first phase of the coronavirus pandemic. Many players escaped into the small island the game offered, and ever since, the game has remained one of the most immensely popular games for the Nintendo Switch. Hokko Life doesn’t have the same circumstances, but it does have several advantages. It’s a less expensive option, and it can be played on all consoles, from Xbox to Playstation, unlike its hugely popular rival.

A Town Full of Friendly Faces

While this is the kind of game that doesn’t require the most advanced graphics to be enjoyable, there are some issues that consistently pop up. There are invisible walls that are cold hard reminders that this is a game. Sometimes characters will stand up through a park bench if you talk to them while they’re sitting. Butterflies will casually float through a boulder and flutter out the other side. Visually, Hokko Life generally accomplishes what it sets out to do, but there are small, noticeable errors here and there. 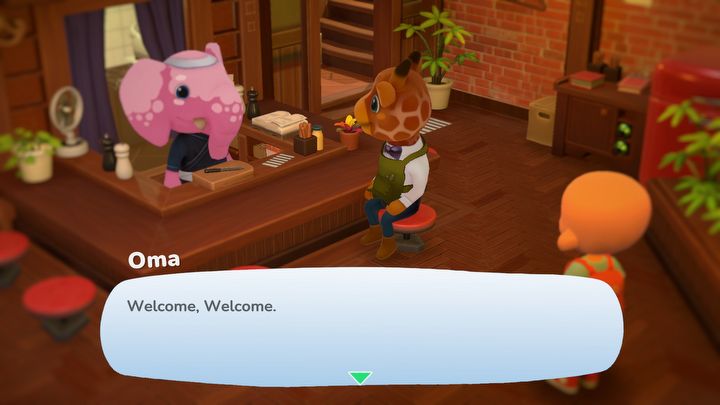 The environments and character design lean away from cartoonish, giving residents long limbs and excellent posture that can be a little off-putting from the wrong angles. Sometimes, the characters can appear in creepy places, peering from the edge of the forest, or suddenly appearing right next to the player when they enter a new area. But the developers did add some nice touches, such as all of the residents carrying around fishing poles on the days of the fishing tournaments.

The art style is of course subjective, and it is different enough from the Animal Crossing aesthetic. The fellow residents are animals, though some of them have strange non-natural patterns like plaid and argyle, which can give the appearance of toys rather than actual animals. This does manage to give some characters more of a visual personality, such as Oleander, the beige argyle dog that is fittingly the most elderly resident in town. But if that doesn’t match the style you want in your game, that could be a problem.

A Lack of Pressure

When playing with a mouse and keyboard, Hokko Life takes on a very grid-like feeling. This can be helpful when measuring out and placing objects, but it makes some side tasks more frustrating than anything else. Trying to catch a butterfly seems like a somewhat easy task that should only get easier with practice, but without the ability to use precise angles and only move at ninety-degree angles, it actually becomes a challenge. This is also reflected in fishing, making it harder to toss the line to a precise location. Using a controller does help with this, but it is very much worth noting for PC players without access to one. 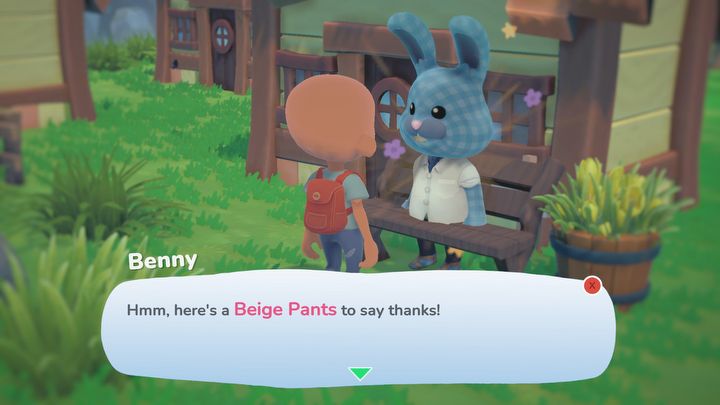 Frustrating movement aside, Hokko Life does manage to accomplish something that is bothersome about other games like Animal Crossing. There is a distinct lack of pressure to achieve any one task. There is no mortgage to pay off to an uppity raccoon or constant plague of weeds to pull. Hokko Life miraculously manages to make a game about building a town and making money a generally relaxing and non-stressful task. Waking up every morning doesn’t begin with a list of necessary tasks. Everything can wait until tomorrow.

Hokko Life, from developer Wonderscope, is another game in the farming and life simulator genre. As is expected players can plant trees and flowers, catch butterflies, go fishing, interact with fellow residents, etc. While Hokko Life does manage to capture a much more laid-back and pressure-less atmosphere than some other games, it is still difficult for it to step out of the shadow of a particularly popular game in the same genre.

Games in this genre, and Hokko Life is no exception, are exceptionally good at managing to draw players in and keep them playing for hours. Hokko Life does a good job of balancing the game, to keep the player interested in what comes next, usually setting up the very next steps after each accomplishment. One new pickaxe allows you to delve deeper into the mine, and soon enough the player will encounter a rock that needs the next upgrade to collect. Thankfully, with no real pressure to keep pushing the player forward, it usually manages to avoid becoming frustrating.

Getting To Know The Residents

There isn’t much background as to how the player arrives at this town. The game begins by the player stepping off a train that can’t be boarded again until a while later in the game. Thankfully, there is a wide variety of appearance options to choose from as well as the ability to make changes later on, so there’s little chance of all players making characters that look alike. 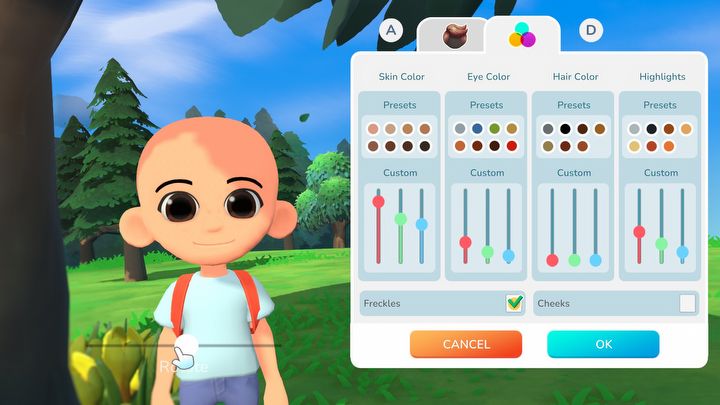 Most of the game’s tasks result from interacting with the other residents. The conversations are of course, very one sided, with rarely more than one option to choose a response from. The player really only has one way of moving forward or completing tasks. Aside from sheer ignorance, there aren’t even any difficult choices between which characters to improve your relationship with or vice versa.

The residents do manage to have somewhat unique personalities, but it gets more and more convoluted as new characters arrive. For example, Oleander and Owyn are two of the original characters that will be in the town when the protagonist first arrives. Oleander quickly establishes himself as the oldest resident, whose favorite color literally is beige. He even tells you as much. Meanwhile Owyn is a young  hipster fully-equipped with a beanie hat and colorful wallpaper. The beginning of the game, however, is the high-point in terms of side characters. More characters continue to arrive, but they often get lost in the crowd and in the constant array of tasks and activities to do.

Hokko Life doesn’t shy away from resembling the Animal Crossing series, players can do everything from fishing, catching butterflies with a net, design their own homes, and the home of their fellow residents; all things that are staples of Animal Crossing. It has enough differences that it’s distinct, while still making itself into a reasonable alternative to the popular series. Since it’s available on a wider variety of consoles and it only costs one third the price, Hokko Life is undoubtedly a far more accessible option. 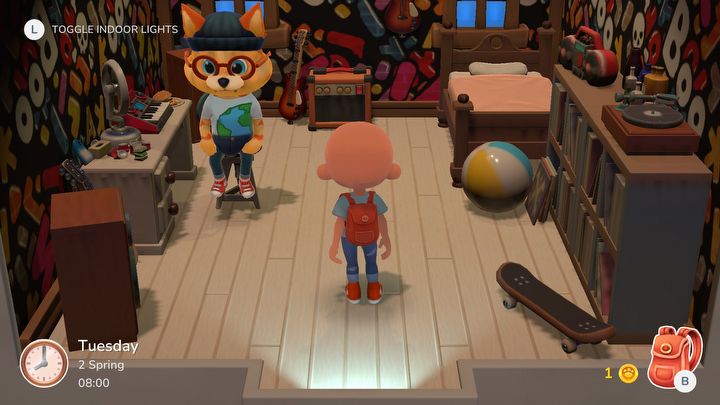 One last thing worth noting is the creativity that can be unlocked with the design table in the game. The controls can certainly take some getting used to, but it has the potential for creative players to explore. Thankfully, whatever players build can also be shared through online stores that other players can visit. The Hokko Life main site also hosts creation challenges to inspire unique builds, and there are already some impressive designs available. Who knows what unique designs might come out of this in the weeks or months after its full release.

While Hokko Life may not quite stack up to Animal Crossing in terms of style and gameplay, it still accomplishes what it sets out to do: create a safe escape for players. The lack of pressure and lack of meaningful options can make for a very relaxed gaming experience, but it also makes Hokko Life a very one-note kind of game. For many players that enjoy this type of game, this won’t be much of a problem. However, anyone that is expecting a little more excitement for their gaming experience, might want to take another look.