It’s impossible to talk about a 4X without bringing up that one game everyone has played at least once in their lifetime – Civilization. It’s a series that is over 30 years old now, and in that time continues to grow and expand on its previous iterations. However, this isn’t an analysis into Civilization, but we just had to mention it because most 4X games are closely compared to this behemoth series – as is this one.

For titles in the genre to stand out, they have to find a way to distinguish themselves from that tried-and-true formula. 4X, after all, stands for explore, expand, exploit, and exterminate – so does each check-off those four qualities and still feel new? Amplitude Studios did its homework, and while Humankind looks like another civilization management – ahem – Civilization game, it offers enough personal touches that keep it fresh yet familiar at the same time. 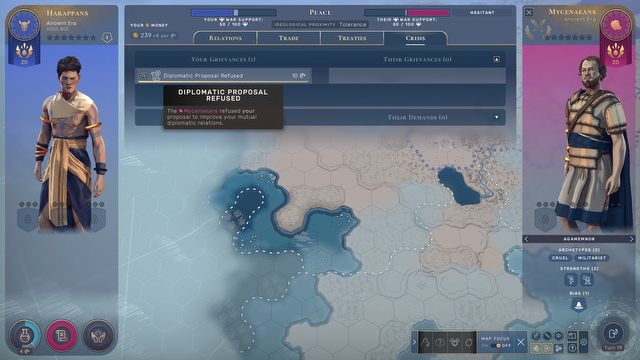 For starters, the way you win Humankind is through fame. Yes, history will tell us that the best empires are those that are forever remembered whether for good or bad reasons, and so it makes sense that you will continue to use fame as your guiding beacon to victory. You earn fame through various actions like building things, killing enemy tribes, making money, and so on.

Winning the game on fame also makes things more fair as you don’t have to worry about another culture capitalizing on religion, for example, and beating you to the punch. Instead, you will need to use your own culture’s advantages to focus on the best ways to earn fame and stay in the lead. There are many ways to amass fame, too, and due to the how your civilization changes over time, it gives you a lot to play around with. 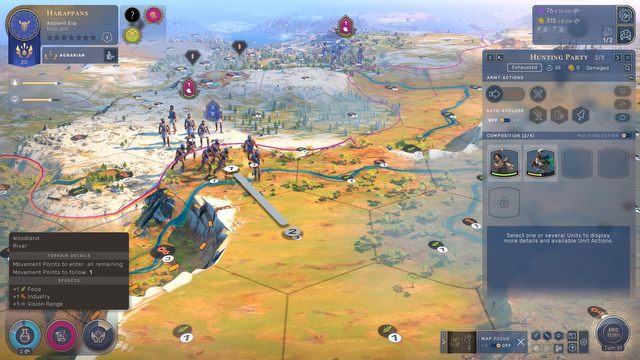 In fact, your civilization can, and most likely will, change as you progress through the eras. When you first start a game, you start off as a Neolithic tribe, roaming the lands in search of a land to claim as your own. These first few minutes of gameplay are randomized as you don’t know what your map looks like, how much land you have to work with, or how rich in resources the surrounding terrain is. You can tweak some of these attributes in the options to customize your experience, but no two starting location are ever the same.

After you do a few tasks like build your city, plant more outposts, and build districts, you will earn era stars that help you progress to the next era. Once you gain enough era stars, you are able to advance into the next phase in time and choose a civilization to call your own. And that’s the thing – while a game like Civilization has you following one culture and watching it grow and transcend to a worldly power, Humankind lets you mix and match various cultures to your liking. 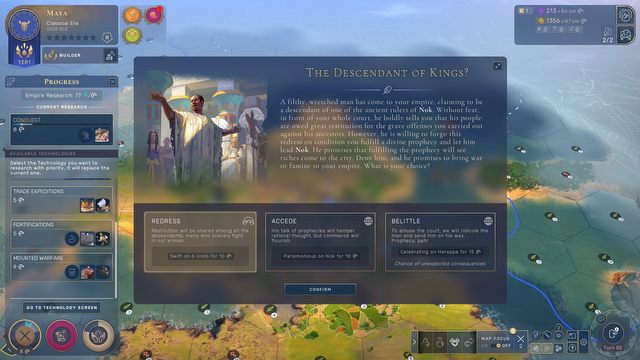 The great thing about picking a new culture each era is that it lets you change up your strategy every now and then and focus on various elements in your conquest. Cultures bring with them unique buffs and bonuses to certain resources, but they also grant you more fame for unlocking era stars of that culture’s attribute. A science culture like the Greeks, for instance, will provide you with extra science per turn that lets you discover more technologies even faster allowing you to unlock era stars for discovering a set number of them.

In Civilization, you were stuck picking just one major kingdom and seeing it evolve through time. Here, however, you can play as the Harappans during the infancy of humankind, build up your food resources thanks to their agrarian focus, and then shift over to the Mayans who excel in industry, letting you build more structures and expand your cities. Thinking ahead and having a strategy in place will undoubtedly reward you in fame. 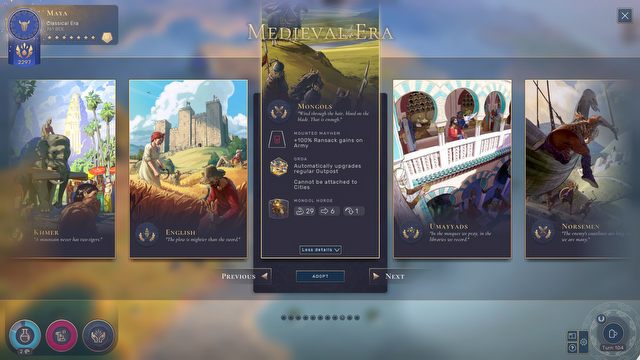 Even engaging in war gives you the chance to manually make each move, allowing you to consider rivers, high ground, and choke points when planning your attack. You can even bring in reinforcements in between turns allowing you to turn the tide of some battles. Another interesting feature is that when you are at war with someone, you will automatically surrender if your war support meter goes down saving you resources and time. The same applies to your enemies so it makes conquering other kingdoms a lot less tedious than plundering everything around you to win. 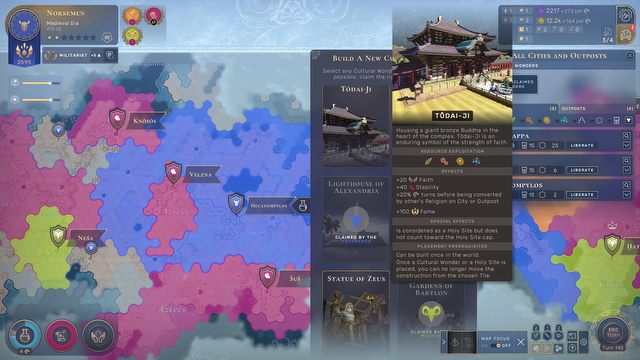 After playing a few games, you will find a rhythm that works for you and can easily beat your opponents if you use these tools at your disposal. You may even be inclined to use the same tricks that are sure to reward you with the best results, and because each map is different, your challenge will lie in understand your terrain and neighboring cultures. It’s not repetitive by any means, but you do realize what works and what doesn’t work after a few games.

When to enter the next era is also an important decision since you will be the first to pick the culture you want, but all of your current era stars will reset with each advancement. Because cultures are first-come-first-serve, the game also tends to feel like a race – be the first to pick a new culture, be the first to build your favorite ancient wonder, or be the first to reach Mars. Like most 4X games, Humankind slows down a bit in the middle so this feeling of competing with others gives your turns more meaning. 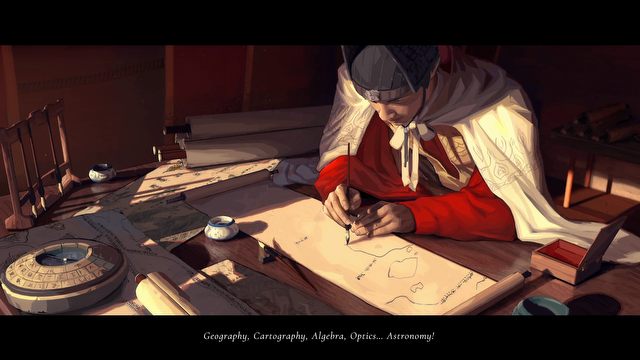 The downside to this method of cultural adoption is that your game will seem, ironically enough, lacking in personality. Games like Civilization let you follow one culture, its ruler, and its people as they grow to new heights. Here, everything is thrown at you at different times so you don’t really have a sense of belonging. Your “ruler”, so to speak, is actually an avatar you create for yourself who changes clothes based on your current culture and era so he or she will lack that level of historical appeal that other games usually bring to the table – no funny accents here. You can decide to stay as the same culture and gain a bonus in how much fame you get, but the game is much harder that way as you will be limited to what sorts of bonuses you get. The game is meant to be played through various cultures but doing so comes at the cost of feeling like you don’t belong to any one in particular.

Other world rulers can form alliances with you, barter, or even engage war with you, but because they also change cultures, it’s hard to keep track of who they represent. Their influence is represented by a specific color on the world map, but because the Huns could become something else at a moment’s notice, it becomes a chore keeping track of who is who. Instead they, too, lose their identity and you will simply refer to them as the blue, green, or purple guys. 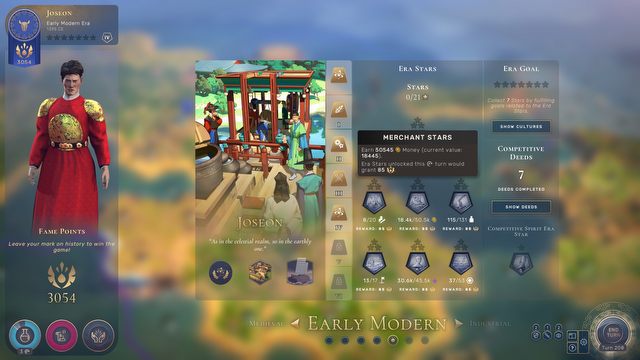 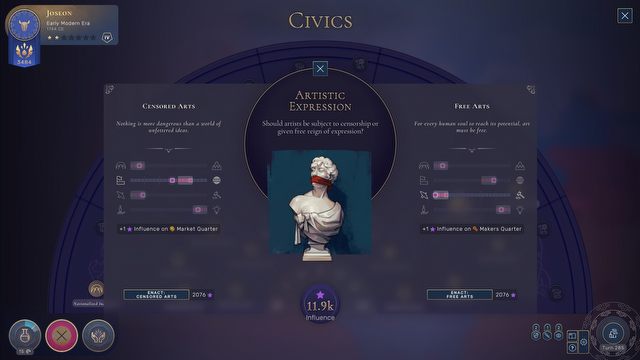 What’s more, you will encounter various events and civic decisions as you play that will force you to decide which way you lean on certain ideologies. You can choose to focus on tradition or progress, liberty or authority, and so forth. It’s great to be able to shape your people in following what you want, but again because you are going from culture to culture, these events and their accompanying blurbs can seem either random or generic.

A highlight of entering a new era, however, is that your cities continue to grow atop their ancient foundations meaning your past cultures still remain part of their identity. This can lead to cities having buildings from various parts of the world and even your armies can features a mix of soldiers, skin tones, and classes. Sometimes though, it feels a bit like Sim City where you could choose various landmarks and place them in your cities – some look cool, but others seem a bit out of place. Multiculturalism comes at a price. 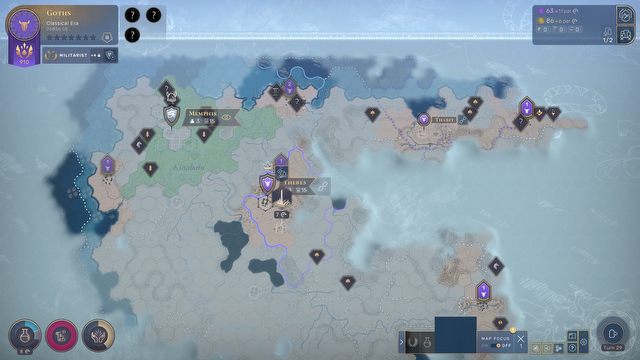 Despite this, the game does an amazing job of making all these cultures look good and feel uniquely different. Besides the obvious architectural differences, cities also contain unique bits of detail when zoomed in that let you know they are alive and bustling. Roads connect your cities to your outposts and you can even see NPCs or animals just roaming about on their own. Each culture also brings with it appropriate music that plays letting you know you’re under new influence. So while Humankind may not be historically accurate, it does a great job of being historically authentic.

Authenticity is definitely at the forefront of what makes Humankind such a compelling experience. Just the thought of mixing cultures and adopting the buildings and ideologies of eras gone by is an anthropologist’s dream. It stumbles in connecting you with each culture, however, as it all blends together into a blur that resembles its world map. It’s a Civilization game for those who have played enough Civilization games and offers you something new to play around with.

According to our users, Humankind for PC was a disappointment - the expectations before the release were higher than the current average user score.