Humankind is a turn-based 4X strategy developed by Amplitude, a studio specializing in this genre, known for such titles as Endless Legend, Dungeon of The Endless and the Endless Space series.

The game is set in historical setting. The player takes control of a simple community and must carry it through over the centuries. Starting the game, we create a civilization, combining elements taken from 60 real cultures of different periods - from the Bronze Age to the present day.

The game takes place in a turn-based system and the player's goal is to gain great fame, which we build by making important decisions, winning battles and accomplishing other great deeds. We meet many famous historical figures and we have to face events that took place in the past. We must also take care of the economy, establish diplomatic and trade relations and develop the technological level of our subordinates.

Apart from managing our civilization, we spend a lot of time fighting, which also takes place in turns. The devs have prepared a tactical battle system, taking into account, among others, terrain and objects on the map. Such approach also affects the strategic layer, as it is necessary, for example, to design cities in such a way that it is easier to defend them against attacks of enemy armies. 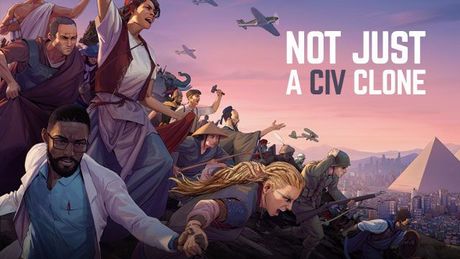 Yesterday, a new website was launched on the web, which most likely heralds the upcoming game of the Japanese publisher Sega. It's quite possible that by the way, we also got to know its title.

At The Game Awards 2019, Amplitude Studios showed a new trailer for its upcoming strategy game, Humankind.

The devs of turn-based strategy Humankind informed us that the game will not be released until next year. Also, the registrations for closed tests have begun.

SEGA has revealed the approximate release date of Humankind, a 4X strategy from Amplitude, creators of the Endless Space series. In addition, we learned the system requirements of the PC version and the game's price.

The new live-action trailer of Humankind, a 4X strategy game from Amplitude Studios, the creators of Endless Space, has appeared. We also got to know the game's exact release date.

Amplitude Studios shared a scenario called Lucy OpenDev with players who pre-ordered Humankind. In addition, gameplay footage from the said demo version of this 4X strategy was presented.