It makes sense to give The Witcher a mobile game that takes what made Pokemon Go so addicting and infuse it with the rich fantasy the series is known for. That is, this idea is great on paper but seeing it play out in a game isn’t exactly the best representation of the experience we thought we would be getting. Yes, it’s a game that features notable characters, spells, and lore from the series, but how it’s structured demands a lot out of you.

A Witching We Will Go 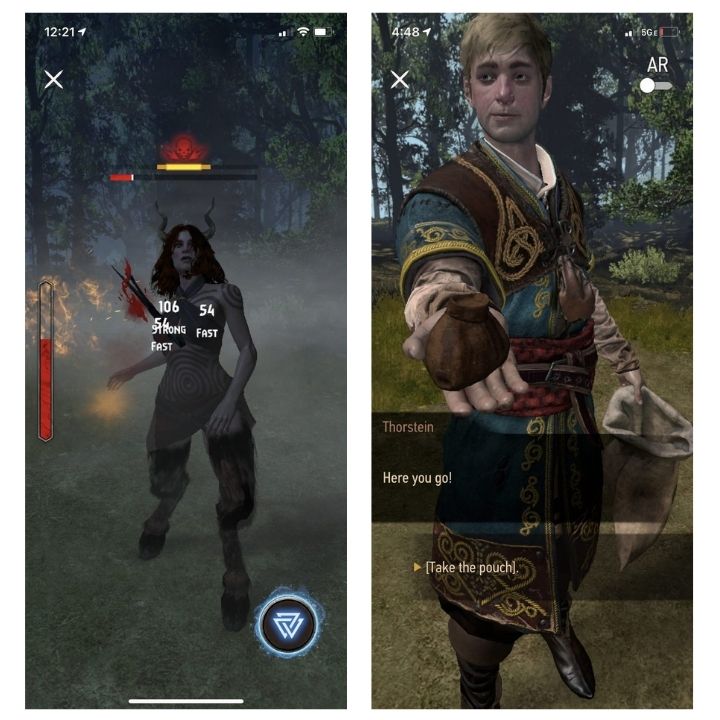 The Witcher: Monster Slayer is an augmented reality game that uses your mobile device’s GPS to turn your surroundings into a world filled with monsters for you to, well, slay. After you create your character with the most basic of customization options, you are then free to engage with dozens of monsters like devourers, harpies, and water hags and whittle them down.

As a newly appointed witcher, your goal is to essentially to fill up your bestiary with as many monsters as possible and defeat them to gain experience and the random loot they drop. While this sounds like Pokemon Go already, the difference here is that there are no Pokeballs to throw so you are essentially killing everything in your path and collecting their heads as trophies.

Battles are intuitive and involve swiping your screen to swing your sword to take down each enemy you encounter before they defeat you. You can perform light and strong attacks, cast spells that cool down after a few seconds, and block to reduce some of the damage you take. Hitting monsters consecutively also fills up your critical hit meter to perform a strong special move.

Most battles can be finished in a matter of seconds, but you are bound to encounter monsters that are just too tough to take down. You can craft potions to boost your melee attacks during a fight using the loot you acquire or you can also equip bombs for added damage. If you lose a fight, you will simply respawn and lose the items you brought with you. Early fights won’t require these extra power-ups but the game has a tendency to spawn monsters around you that are jokingly too difficult. 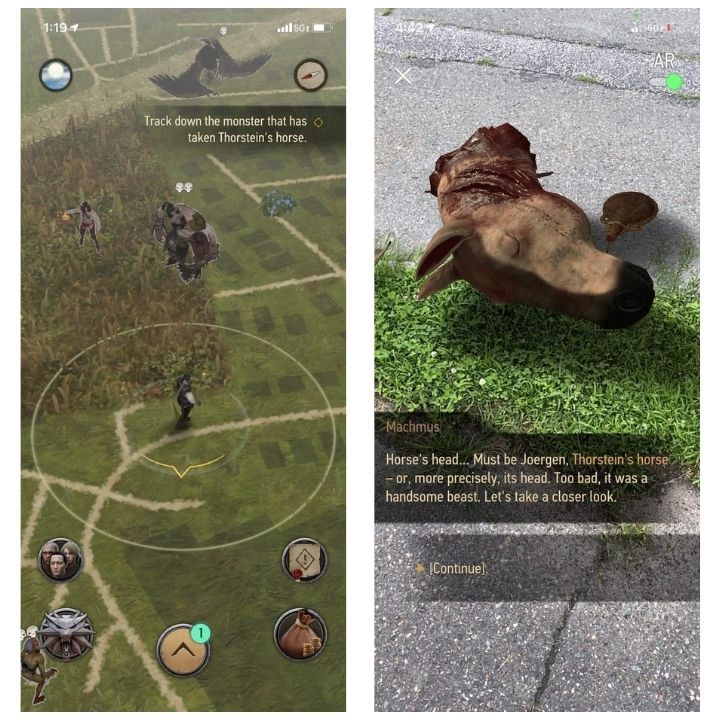 Here is where the grinding comes in. When you kill a number of the same type of monster, you get a skill point to use to increase your stats across multiple skill trees. So if you really want to beat every enemy in the game, you will need to fight your way through lots and lots of lesser foes just to get stronger to permanently boost your attack, defense, or even potion potency. The actual act of leveling up doesn’t do much in this game as it simply rewards you with some loot and a skill point or two, but the real way to get stronger is to kill everything you can.

Completing quests also improves your chances to take on greater enemies as you are rewarded with money you can use to purchase better weapons and armor. And if you want to save some time and lots of walking, you can pay real money for these too of course. The issue with some quests is that they require you to return to their original location to complete them or will surprise you with a super difficult enemy you can’t beat right away.

Yes, the whole point of the game is to walk around and find monsters and quests, but most quests will have you going out of your way to find them or to retry said quest in that same location later, tomorrow, or next week until you manage to beat its boss. Unlike the ease of catching Pokémon that popped up on your way home, Monster Slayer wants you to change your entire route instead. If you’re all for getting in more steps during the day, this game will surely help get you there.

The most impressive quality of Monster Slayer is its clever use of augmented reality. Aside from battles that let you go into AR mode, quests truly come alive when you enable it sometimes forcing you to get up close to a statue on your path and move around it to examine all its side. Your neighbors may think you’re weird if you’re squatting outside their home on random evenings, but it really puts you in the game.

At times Monster Slayer becomes a super immersive experience, and it’s always a joy to discover a new monster during a different time of day or when the weather changes. When that sense of wonder wears off after lots of grinding and walking around to find more monsters, you may begin to question whether you want to keep going. If you do, things get better as you stronger, but the path of a witcher is an arduous one and requires lots and lots of battles.

The Witcher: Monster Slayer for iOS turned out a pleasant surprise for our users - the current average score is higher than pre-release user expectations.