Fans of dabbling in grease, tinkering with engines, and fiddling with suspension in virtual reality have had a busy season this year. After the success of the rather inconspicuous Car Mechanic Simulator, the market’s been flooded with titles that enable the player to dismantle various other machines, e.g. trucks. At last, the time has come for the railway – Train Mechanic Simulator 2017 will see us working hard for the damaged engines to be able to let off some steam and get back on the right track. The important thing, though, is the fact that despite some small spanners in the works from time to time, things work out neatly for most of the time.

This axle box is a mess! 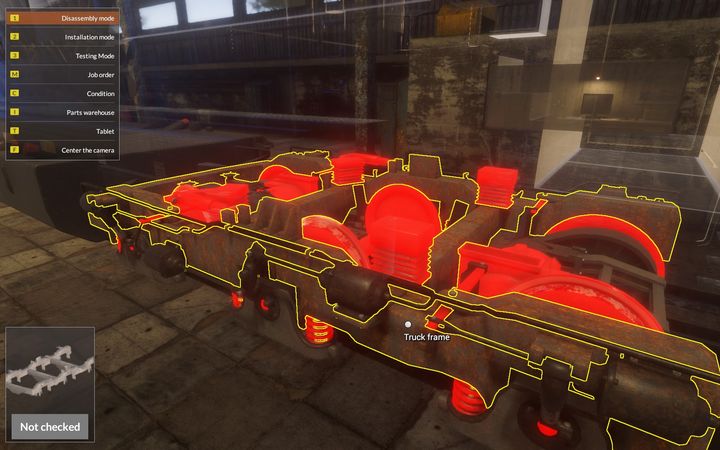 Although I’m not a big fan of neither railway nor anything reated to that particular topic, for some reason I spent long hours of my childhood playing various games starring trains. It all began with the first installment of Railroad Tycoon, followed by a low-profile but wildly entertaining strategy game Rails Across America, only to eventually give way to simulators, namely the Trainz and Train Simulator series. The reviewed game, however, may be one of the strangest representatives of the genre – I mean, is there something more offputting and inaccessible than a chance to mess with the insides of a railway engine? While it certainly isn’t among the best games of this year, homegrown mechanics, tinkerers, and railway maniacs will find Train Mechanic Simulator 2017 as homey and welcoming as a train depot can be.

This is one of the few games to come to our attention through the announcement of... its expansion pack, called Golden Train and focused on the mystery of the lost German train filled with treasure. As strange a marketing tactic as it may be, it doesn’t look like it spoiled the quality of the base game.

The game – as you’re probably expecting – will have us repair railway engines. Our workshop will see various machines of many types, from classic, steam-powered engines, through diesels and all the way to electric ones. This obviously affects the repair method – each engine has unique parts, absent from other engine models, which leaves us with an uncanny amount of parts that we will need to replace across subsequent tasks. I didn’t dare count all the mechanical parts that appear in the game, but I’m more than willing to take the devs’ word – and they say that the game features around 1000 interactive elements. 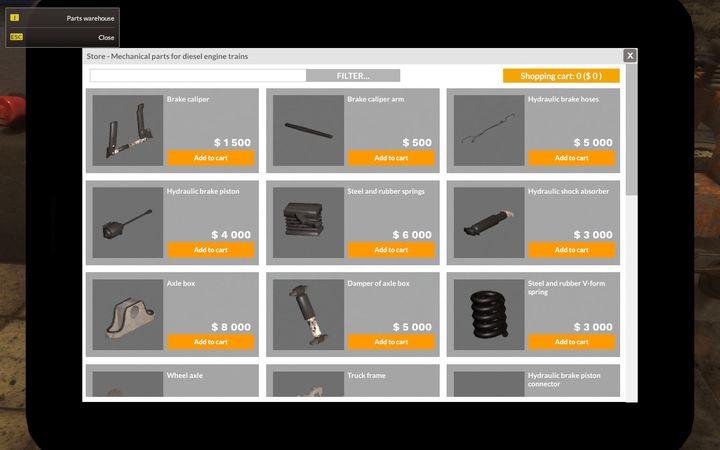 One thing is sure – after several dozen minutes with this game, you’ll become an expert on the inner workings of railway engines. You’ll know where to look for axle boxes, drive transmission will hold no secrets for you, and finding the right spark plug for the right combustion chamber will be a matter of seconds. And that’s just the beginning, as playing with bogies (that’s “train suspension” in layman’s terms) is rather simple and not very complicated; finding out what’s wrong with the complex “heart” of an engine – the power plant – is like looking for a needle in a haystack, at least in the beginning. The thing is, it’s very easy to miss some small parts that may be responsible for various malfunctions – never before have I seen so many cables, gaskets and other microscopic elements in any other “mechanic” simulator. Opening up a cylinder of a car engine in Car Mechanic Simulator was a child’s play compared to what needs to be done here.

Getting back on track

When it comes to gameplay mechanics, the game is based on the aforementioned Car Mechanic Simulator – the player is given a job, performs diagnostics, and replaces worn out or broken parts where necessary. Fixing things in the game is really simple and very intuitive, but also remarkably mundane. The money we earn by completing jobs can be used to expand our workshop, and here’s a piece of advice – begin with maxing out the speed of loosening screws. Assembly and disassembly of parts can be maddening, and since we are dealing with giant, complicated machines, you can imagine the sheer number of bolts and screws required to hold their various elements together. I know it’s all in the name of realism, but “screwing around” can be fun for the first hour or so, later on it will only drive you crazy. 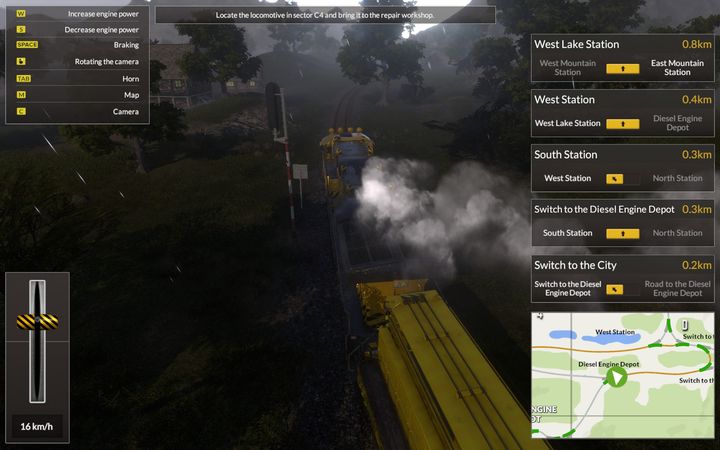 The developers offer 75 premade scenarios, presenting a wide array of various tasks – thanks to the uncanny amount of parts and different jobs, but also due to a single element that does wonders to the gameplay and enables us to escape the monotony of railway workshops. The creators have given us the option to tow broken engines to the workshop, which requires us to operate a service train able to haul the broken engine and bring it to our place.

Train mechanic to the rescue!

To my surprise, it’s a very nice and well-implemented element – broken engines can get stuck in numerous places throughout a rather big map, divided into sectors which are used by the game to pinpoint the location of our objective. Operating the service train itself is not very complicated – we reach our destination by navigating railroad switches and adjusting the train’s speed. The latter is not very important though – you can take a curve at 50-60 kph and never come close to derailing the train; we can easily go full speed ahead, as this has almost nothing to do with simulation. 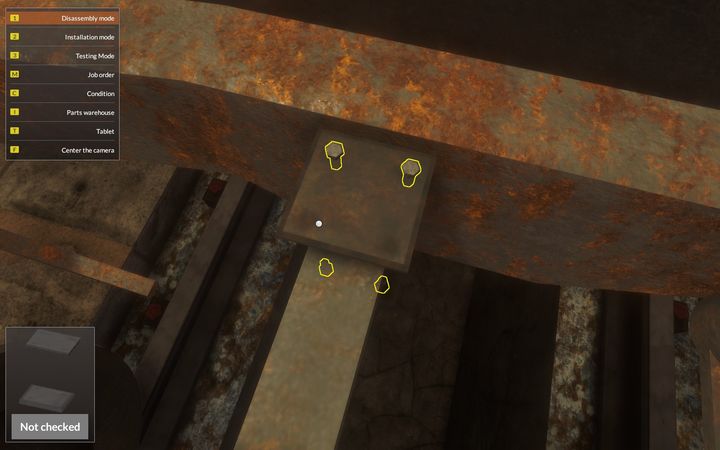 On more than one occasion we’ll have to deal with engines that, for various reasons, got derailed – this requires us to operate a special railway crane, enabling us to put the broken engine back on track. Handling a dozen ton+ engine hanging on ropes can be tricky, but it adds a nice variety to the game. Which is a good thing, as circling between the workstation, the workbenches and various desks could easily scare off anyone when served in large doses.

Let’s also note that numerous elements from previous mechanic simulators have been improved upon – the user interface has become much more comfortable, enabling us to switch modes on the fly. Another good idea is the introduction of three separate workbenches – one for electrical parts, one for mechanical parts, and one for hydraulics. Equally simple is the handy tablet, which allows us to directly order the necessary parts required to fix the engines, or upgrade the workshop. They may not be breakthrough changes, but the small improvements certainly have their part in making the game fun to play. 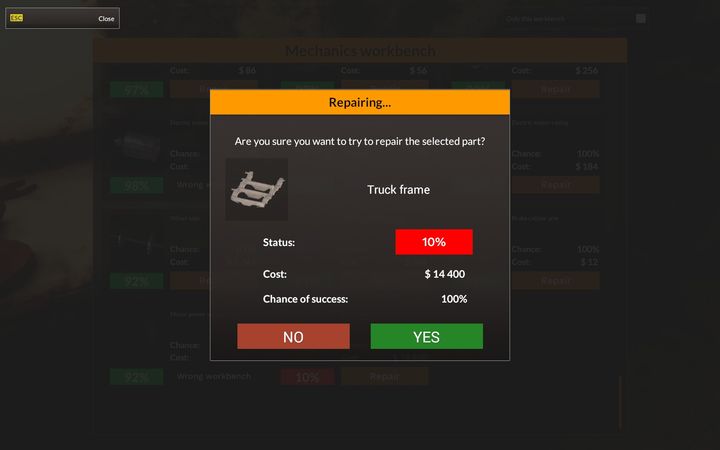 What bothers me about this game, however, are the technical aspects – this has become something of a tradition in various latest simulation games. When it comes to visuals, the game looks simply mediocre – visual shortcomings are buried under a thick layer of blur filters, but it’s hardly a gamebraking issue, as all the necessary parts of the engines can be localized without any problems. The nasty camera work, on the other hand, can cause some serious trouble during the repairs – TMS 2017 is yet another game in which our prime source of irritation becomes the task of setting the right camera position and angle rather than locating the broken part. This becomes painfully obvious when fixing power plants, where finding and reaching smaller elements requires the patience of a saint, all thanks to the nasty camera.

One more thing is the annoying, constant tendency of the game to freeze and crash when we drive the service train. The game works flawlessly when in the workshop – I’ve never been kicked back to desktop from there – but when traversing the world map, this has become almost a common occurrence. Not to mention numerous smaller freezes – these are the things that should be fixed in the first place, and I hope it will happen soon enough. 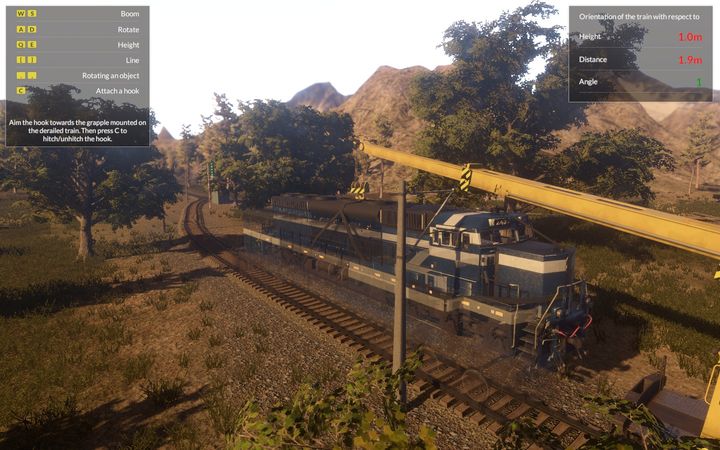 If the thought of repairing trains doesn’t excite you, and your experience with Car Mechanic Simulator or some other similar game left you indifferent, I won’t even try to convince you to play Train Mechanic Simulator 2017. It’s common knowledge that simulators as a genre are targeted at a specific group of people, but TMS 2017 appears to be a really interesting proposition for anyone who likes to tinker and trifle with mechanisms, as well as anyone interested in the inner workings of railroads and engines.

Train Mechanic Simulator 2017 is a very pleasant production, although it requires a good dose of patience. The gameplay and repair mechanics are still doing fine, and the well-polished smaller gameplay elements, as well as the service train sections add a significant portion of fun. This, unfortunalely, makes the technical issues all the more painful. A hardly honorable mention goes to the irritating camera work, which was the one thing that could really put me off at times. Despite the problems, Train Mechanic Simulator 2017 provides a decent load of fun, lasting for at least several dozen hours. The game is a solid piece of craftsmanship – not a work of art, but surely worth playing.

According to our users, Train Mechanic Simulator 2017 for PC was a disappointment - the expectations before the release were higher than the current average user score.