Arent you afraid that after its release the game will share the fate of Watch_Dogs, where the game was being compared to the first E3 gameplay?

If someone rewatches the trailer they will notice that the character models look better in the game; even Geralt is more polished  for instance, he has better shaders. Weve added a bunch of details and weve significantly improved the facial expressions and the lip sync. We have 7 different dubbing versions, so were not able to record the changes on actors face with the performance capture technology, like it was done in, say, Call of Duty. That wouldnt fit on three blu-ray discs. Keeping that in mind, weve implemented a dynamic system based on vowels and consonants, similar to the one in the previous two installments, where it did rather poorly. With The Witcher 3, the difference is astounding  we have set the bar really high for the entire industry as compared to other games that rely on this system (such as BioWare games  authors note); thats another thing that wasnt visible in the trailer.

Meanwhile, the quality of the lightning in the trailer remains a matter of taste. Weve made a mistake choosing to render some shots in dark and greyish colors. To put it simply, that was the option picked by the engine. I think that there will be locations that will look jaw-dropping, and no one will claim that they differ from what was seen in the trailer. Unfortunately, there will also be fragments where the game will look worse. Its the same with GTA  when the wind picks up and it gets grey, especially in the forest, the graphics seem certainly worse than in a neon-filled and lively city.

Will the game be displayed at 900p on Xbox One?

It surely will. 900p with upscaling to 1080p, but improving these conditions is not out of the question.

The Witcher 3 for PC has rather high requirements, while the minimal ones resemble the requirements recommended in GTAV.

The requirements weve announced are real, its not as if were lowering them. Thats what our programmers have fought so hard for  the optimization is getting better every day.

Will we get 30fps or 60fps on the recommended requirements for PC?

I think we'll stick with 30fps. Until the very end we intend to work on efficiency  it is crucial, as the machines are quite varied. Our programmers strongly urged us not to resolve to demagoguery, confuse anyone, or bring down the announced requirements to accommodate lower spec. Its as Ive said and it can only be better. 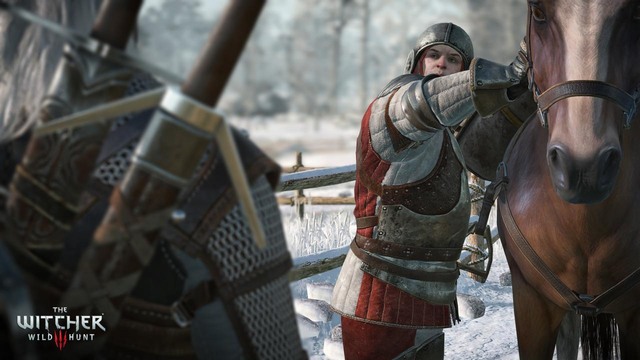 Werent you too quick to announce Cyberpunk? Or was it rather a necessary stunt to show your stockholders that CD Projekt Red has a bigger portfolio?

Not entirely. Obviously, its important to come up with plans and execute them. In that way, we wanted to present a certain vision of ourselves. Such a thing is very important for a company like ours  a company that is both a developer and a publisher. The moment we announced Cyberpunk, we certainly got busy with it. Later on, it turned out that we needed help in completing The Witcher 3. We have put a large part of the team to work on finishing the game. Once its released, well be able to focus on Cyberpunk. After all, we havent announce its release date so no one can complain.

Will we get to see Cyberpunk at E3?

This year will belong to The Witcher.