World of Warcraft is now over 12 years old. Since its release in 2005, the game has undergone some tremendous changes. Today, the most recognizable MMO in history isnt as popular as it used to be, true, however its still the leader of all subscription-based games. Yet there exists a considerable group of WoW fans who think the game used to be better. More precisely, that the best version there has ever been was WoWs vanilla  the original production that ended with the release of The Burning Crusade expansion in 2007. This is the reason behind the vast popularity of private  or, according to another narration, pirate  servers, emulating the vanilla content.

The biggest and most famous of these servers was Nostalrius, which sheltered a whopping 800,000 active accounts, and as many as 15,000 old shoolers online simultaneously. It was a true dreadnought of private servers  no wonder it eventually came into Blizzards attention. As a result, the server was shut down in April last year, which provoked a huge outcry of the community; a petition was launched, promptly gathering 200,000 signatures, but to no avail. The creators of Nostalrius were, however, told by Blizzard that the company would like to invite them to discuss a possible introduction of official classic servers. Unfortunately, nothing else was done in this matter, and after losing their patience, the administrators of Nostalrius handed the source code and database over to the Elysium team, who decided to revive the cult server. 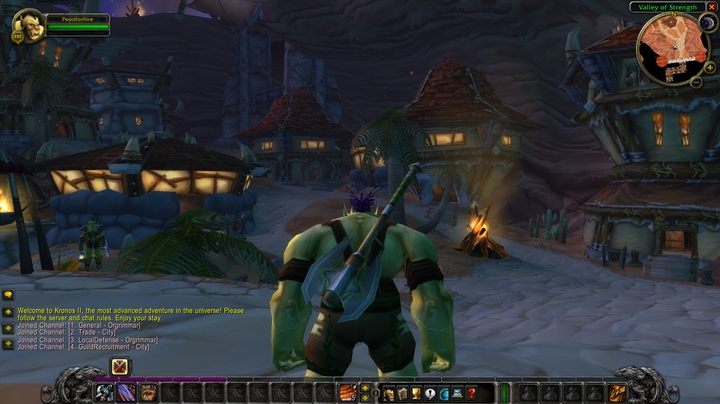 In the vanilla, Orgrimmars architecture was strongly reminiscent of Warcraft III. 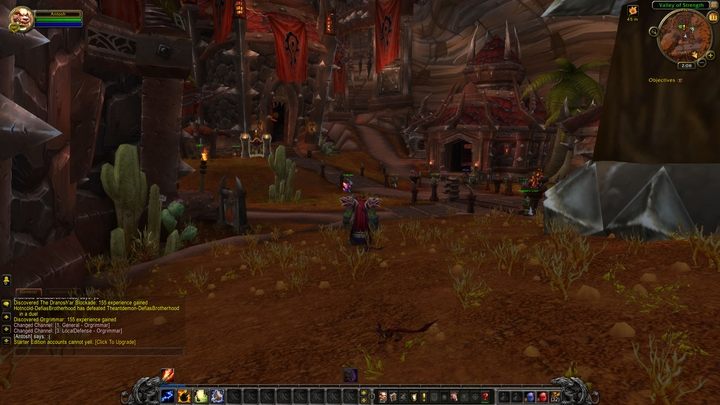 Today, the Hordes capital has much more details.

But the big question is: was the vanilla World of Warcraft (ver. 1.12.1) indeed superior to the latest expansion, Legion? Maybe its just the power of nostalgia at play here? A yearning for times long gone; for the unforgettable adventures in Azeroth? Well, theres only one way to find out  lets see how has the popular MMORPG changed throughout the years and compare todays game with the classic World of Warcraft.

One disclaimer before we proceed: this article was written from the perspective of a dedicated fan, one whos been playing WoW since 2006, that is the heyday of Blizzards hit.

The classic World of Warcraft offered a relatively broad range of combinations and professions of the characters. You could choose between the two paramount sides: the Horde or the Alliance. Within these, there were 8 races and nine classes. Some classes were only available for specific races, and there was one exclusive class for each faction: shamans in the Horde and paladins in the Alliance. And this was all in accordance with the lore.

Further expansions introduced some changes. The Burning Crusade DLC brought two new races: the draenei for the Alliance and blood elves for the Horde  the classes available for these two races were the ones previously available only for the opposite faction. This evened out the chances of both factions and improved the overall game balance  different classes were useful against different bosses. 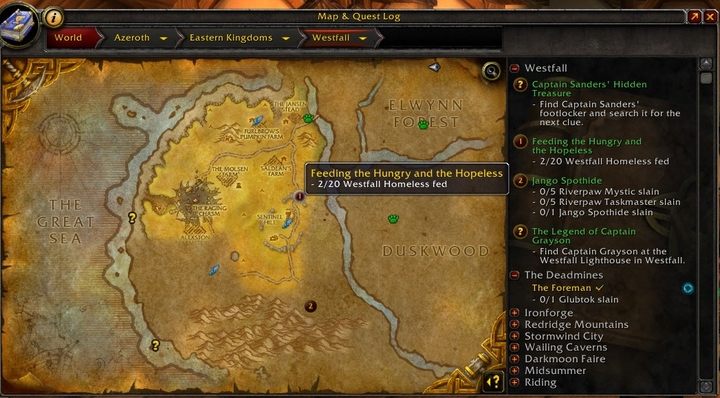 The QuestHelper add-on was a must-have in the vanilla. Today, utilities like that are implemented by the devs themselves.

Currently, there are thirteen races and twelve classes to chose from. The most important feature introduced by the new classes (Death Knights, Demon Hunters and Monks) is that they are able to perform as tanks; a class that many players thought was missing in WoW. Moreover, the Cataclysm DLC increased the number of professions, which encouraged the community to experiment with new roles. These changes, however, stirred the original harmony of the lore: Blizzard provided a story background that supposed to warrant them, but the conservative part of the fanbase was up in arms, finding the changes heretic. Still, when pitted against Nostalrius, Legion wins with the sheer amount of options and possibilities available.

I will never forget the first hours spent in Azeroth. The gameworld was massive and fascinating, and traveling had that magical aura of adventure. Every stone seemed interesting, and discovering a new quest, treasure chest or rare enemy made your heart bit faster. 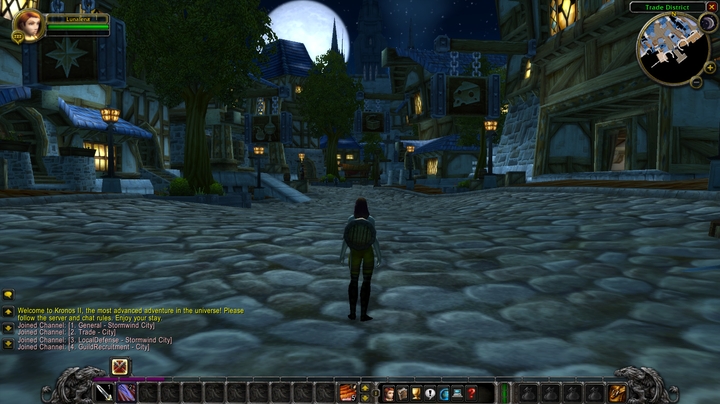 The resolution is no longer impressive. 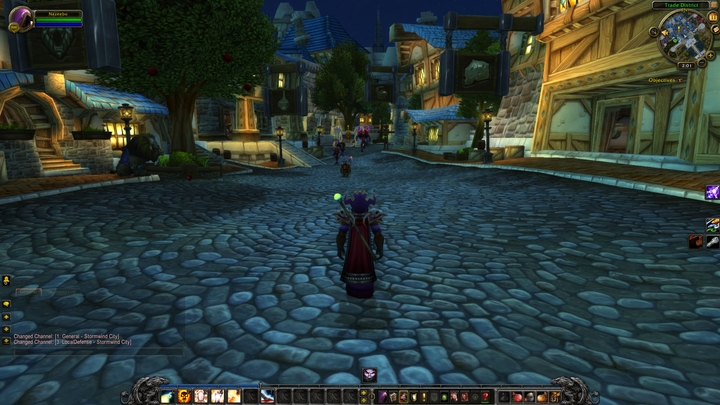 Stormwind of today not only has new districts and better bricks  ambient lighting was also added.

Today, its nostalgia I feel more than anything when I come back. I know this world like the back of my hand. There were times, though, when it was something incredible, especially for the fans of the RTS series. Traveling required a lot more time  you didnt get the first mount before level 40, and reaching level 60 was only the beginning of saving up for a really fancy mount, which increased movement speed by 100%. There were many players for whom the characters speed was the deciding factor in choosing a class  Paladins and Warlocks were able to obtain mounts through special quests; Druids, Hunters and Shamans were able to move a bit faster during the initial stages of the game.

Lets compare this to the current situation: players are able to get a mount on levels 20 and 40, and on level 60 you can get a flying companion. Blizzard has also increased the number of fast travel points, and there are zeppelins and ships shuttling between capitals. In the vanilla version, night elves and taurens had to take a long and dangerous journey in order to reach the biggest hub of their faction. Looking back in time, as a guy whos developed a couple dozen characters in WoW, I have to admit that traveling in the original game was a bit frustrating, although infinitely more immersive as well.

The distinguishing feature of World of Warcraft were the quests. Truth be told, the quests from the vanilla may look rather basic today, since they were mostly fetch quests. Yet when WoW was released, other games in the genre were based solely on grinding, which  to a degree  was also present in Blizzards hit. The reason was simple: there was a little over 300 quests in the vanilla  100 for each faction, and 100 neutral, available for both. Since the character progression took a long time, methodical extermination of different mobs was a sad necessity.

Today, the game consists of over nine thousand quests, which is more than enough to reach the maximum, 110 experience level. Then, the new quests are accompanied by interesting mechanics and embellished with exciting cut-scenes  the game is at times similar to a single player RPG. That became possible with the introduction of instances by the Wrath of the Lich King DLC. Thus, in this respect, the current version of the game is simply beyond anything found in the vanilla. 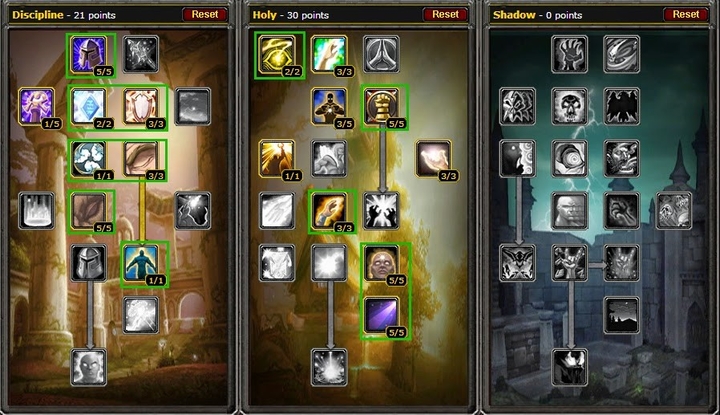 Talents in the classic WoW allowed some experiments.

For me, of the most interesting element of WoW was always calculating the progression of my characters. Obtaining better equipment and counting all the stats was one thing, but there was also a talent system, inspired by the cult Diablo. It allowed you to steer the development according to your own preferences, and despite the amount of players who believed in one true combination, plenty of people eagerly experimented; among them especially PvP players. Two add-ons, The Burning Crusade and Wrath of the Lich King, increased the number of combinations by rising the level cap to 80. Even though there were some very powerful skills at the end of each of the talent trees, many players preferred interesting hybrids.

Sadly, Blizzard decided to simplify things even further, regularly limiting and subtracting different features since the release of Cataclysm. Today, talents are more like the solution featured in Diablo III, and the classic trees can be found in the artifacts, which were introduced in Legion (they still allow character development within a single specialization). Compared to the vanilla, its certainly a step backwards  same as the limited number of stats defining items.

Subsequent expansions introduced a number of new solutions and overhauls. In the vanilla and The Burning Crusade, the main issue the players had was the lack of tanks and healers. Combined with the fact that groups had to be organized manually, this often reduced the gameplay to roaming towns and spamming invitations on the chat. Wrath of the Lich King introduced a system of double talents, saving players from laboriously composing their skills and spending a small fortune on resetting talents. The Dungeon Finder was also a great idea  the system automatically finds players from different servers and puts them together in a group for a raid. The atmosphere isnt the same as when doing these things on foot, but the solution is surely more approachable. 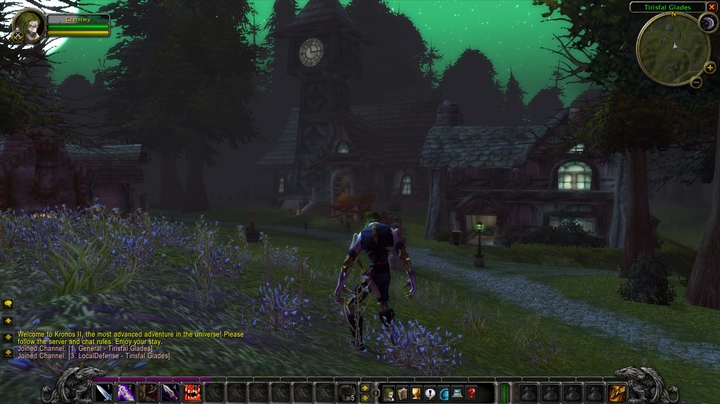 The city of the undead, Brill, looked gloomy but rather poor. 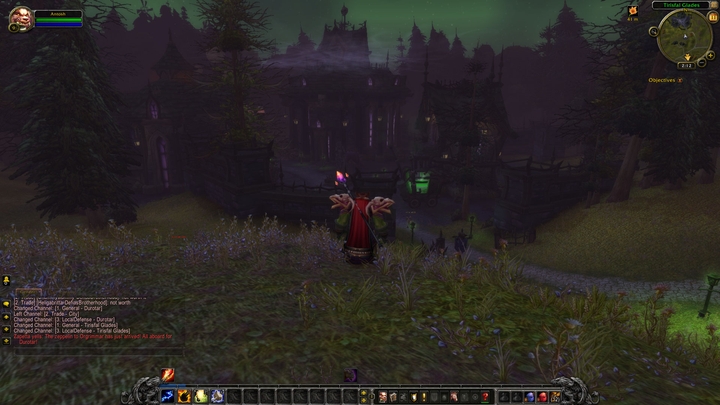 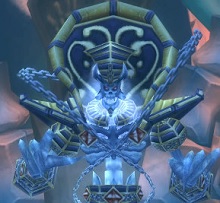 The community of World of Warcraft often grumbles that Blizzard oversimplified raids by getting rid of 40-player escapades and introducing the Raid Finder. What we have to keep in mind here, however, is that at the same time some improvements were made: raids have more difficulty levels offering new challenges, and the new instances have much more complex boss-fights mechanics than the vanilla game. Where do these changes stem from, though? When Mists of Pandaria was released in 2012, I had the pleasure to chat with Ion Hazzikostas, Lead Encounter Designer in Blizzard, who explained the issue.

At the time when the community was the greatest (10 million active subscribers), only 3 thousand players worldwide managed to reach KelThuzads chamber (hes the last boss of the Naxxramas instance, and at the same time the last opponent of the original game). This level of (un)interest in classic raids after the release of The Burning Crusade was a sign that some facilitation had to be introduced, so that the less-persistent part of the community can also experience the original story. The most devoted players still had unique items, achievements and additional difficulty levels to brighten their day.

Blizzard has been introducing elements diversifying the gameplay throughout the years. The achievements incited the players to learn different aspects of the gameplay. Thanks to transmogrification (ability to alter the appearance of weapons), there actually was a point in raiding low-level instances. Based on Pokemon, the fights of pets turned out to be a fascinating game within a game, and the calendar became crammed with different special events. Vanilla was very exciting at the time it was released, but compared to the current version, there were definitely less things to see there. On the upside, the community back then was forced to be active and organize their own events, such as attacking hostile cities or luring one of bosses, Lord Kazzak, there.

Some gamers tend to complain that nowadays WoW is simplified in many respects, but they should bear in mind that all the changes introduced by Blizzard have been motivated by the needs of the community. In the old days, for example, add-ons such as the one introducing an Aggro counter (showing how eager a mob is to attack the player) or Quest Helper (showing quests on the map) were virtually a must-have. Its kind of funny how people who for years searched sites such as Thottbot or Wowhead, looking for solutions, criticized Blizzard for introducing these mechanics in the game. The upgraded inventory management is also invaluable.

Is there anything to come back to? 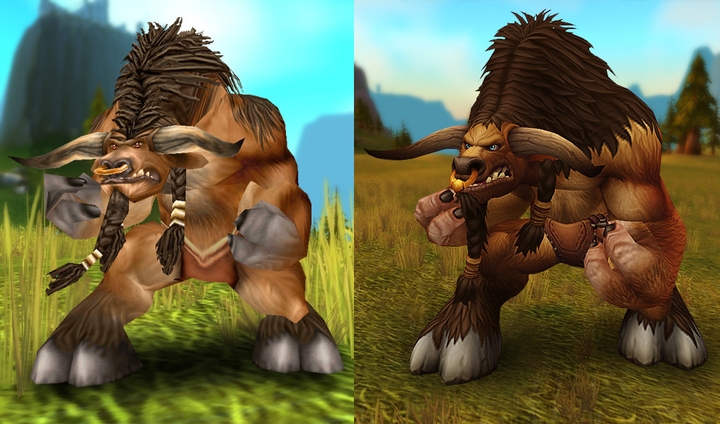 I still think that the main driving force behind Nostalrius is sentiment. Most of the changes implemented in WoW worked out well for the game and allowed it to maintain high quality throughout its twelve years of history. Its actually amazing that World of Warcraft still manages to compete with the newest MMOs  that probably wouldnt be possible, had it not been for updating Azeroth in Cataclysm and character overhauls in Warlords of Draenor.

The latest expansion is a nod to the fans of the classic atmosphere, and at the same time preserves the modern mechanics. Considering that since spring 2015 you can pay for your subscription with the in-game currency, choosing private servers stuck in the past only seems reasonable if you want to travel back in time. Otherwise, World of Warcraft as it is today is simply a superior game.