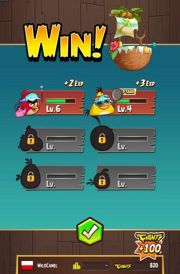 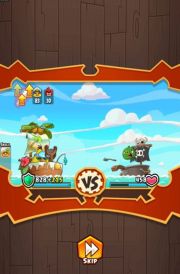 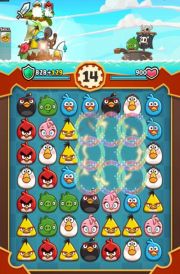 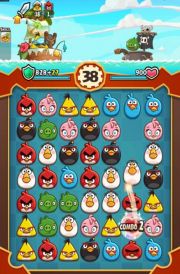 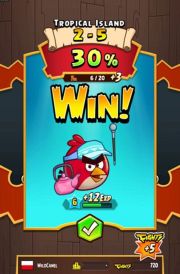 Angry Birds Fight! is a new installment and a spin-off of the bestselling Angry Birds series. Fight! is a hybrid of a match-3 logic game with simple RPG elements, similar to titles such as Puzzle Quest and 10000000. As always, the game, developed by Finish Rovio Mobile, was designed for mobile devices, including AND and iOS.

In opposition to previous, mostly single-player titles, Angry Birds Fight! is a multiplayer-oriented title. The players from all around the world challenge themselves to duels, in which each player groups bird tiles into groups of three or more, enabling them to charge attacks (in the allotted time) to dispose his opponent of life points. The game is governed by well-designed global rankings and statistics summarizing the each players record.

Won matches equal experience, which can be spent to develop the players account, as well as unlock new abilities. Aside from that, each participant acquires accessories and currency, enabling him to buy new equipment (weapons, pieces of apparel, helmets, etc.), unlock new heroes, or upgrade the ship that is used to travel between numerous islands that build the world of the game. When it comes to graphics, Fight! maintains the colorful, well-animated visuals trademark of Angry Birds series.