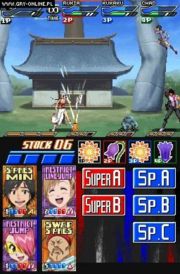 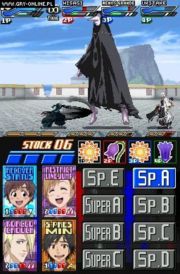 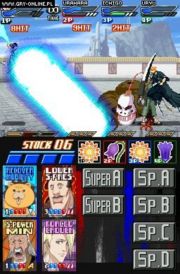 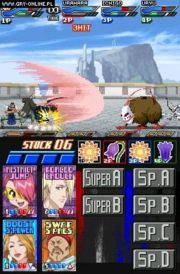 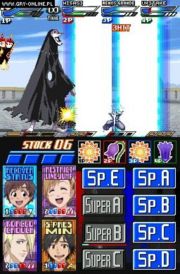 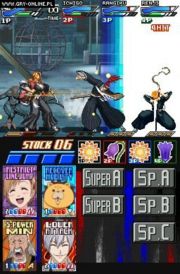 After unidentified beings known as Blanks start popping up, they are soon followed by a Soul Reaper named Senna who makes them disappear. Puzzled by these unknown beings and the even more mysterious girl, Ichigo and Rukia set out to learn more, but uncover an evil plot when a menacing clan tries to kidnap Senna. Banished from the Soul Society long ago, the clan's leader is sending the World of the Living and the Soul Society on a collision course, and Senna seems to be the key to his diabolical plot for revenge. Can Ichigo and his fellow Soul Reapers save the two worlds from annihilation?

There are many new features to this highly anticipated sequel to Bleach: The Blade of Fate:

BATTLE for the first time as an evil Hollow, including the menacing Menos Grande, in the most intense fighting game on the DS!

CHOOSE from 16 new characters, a total of 44 overall!

STRATEGIZE with over 30 new Spirit Cards for a total of 90. Also, now you can put up four cards at a time instead of the previous two.

FIGHT on a team for the first time or go it alone in free-for-all melee battles.

CHOOSE AND CREATE your own icon that will appear during online battles.

WATCH the drama unfold every week in the popular anime series on Adult Swim. You'll recognize several of the Bankai attack moves in the game from the TV series.

Ichigo Kurosaki is an ordinary 15-year-old boy who happens to be able to see ghosts. His fate takes an extraordinary turn when he meets Rukia Kuchiki, a Soul Reaper who shows up at Ichigo's house on the trail of a Hollow, a malevolent lost soul.

Drawn to Ichigo's high level of spirit energy, the Hollow attacks him and his family and as a last resort, Rukia decides to transfer part of her Soul Reaper powers to Ichigo...