Borderlands 2 for PC, PS3 and etc. is the sequel of a successful game from 2009 which received an acclaim from both critics and players. The second installment in the series was created by Gearbox Software Studios, and again it combines first-person shooter with RPG elements of games like Diablo. Just like the previous game, this one too includes a co-op mode.

In the second part of the series you return to Pandora planet to see its previously unexplored regions that hide many secrets of the Borderlands universe. The story takes off shortly after the first one left. This time the bad gay is Handsome Jack, who, after claiming credit for the heroes achievements from the first game for himself, purchased the largest weapon manufacturer, Hyperion company, and declared himself the dictator of Pandora. Our aim is to curb his tyranny, which is, however, presented in a humorous way.

In the game you can meet the old heroes, but this time Mordecai, Lilith, and Brick appear only as side characters. The developers did not take the easy way out, so they prepared four new characters to choose from. They are: Salvador, Maya, Zero, and Axton. Together with new protagonists come new character classes. The Gunzerker can use two weapons at the same time, and takes the role of a tank. The Commando can be assisted by an automatic turret, which can be developed and gain access to new abilities. When it comes to the Assassin, he specializes in taking enemies by surprise  he sets traps and generally keeps low profile. There is also the Siren class in Borderlands 2, which, although existed in the previous game, now received completely new skills.

Weapon system  the distinctive feature of the first game  was completely remade. The developers from Gearbox Software created all weapons from scratch, and ascribed them to particular manufacturers. Unlike in the first game, in Borderlands 2 for PC, PS3 and etc. guns not only differ in statistics, but also in the look and way they work. Also, the games world was substantially modified. Pandora no longer consists of desert landscapes only. Instead, a variety of environments, such as cold tundra, jungles, or rocky hills, are present in the game.

Still, the pinnacle of Borderlands 2 for PC, PS3 and etc. is the co-op mode. It allows four people to play together online or via local network. The creators designed gameplay so that the presence of other players opened access to new tactics. Some of the challenges are available only for groups.

The guide to Borderlands 2 contains a richly-illustrated walkthrough of the main story, as well as side missions. Beginners will also find a handful of hints, thanks to which they will learn the basics of the game. 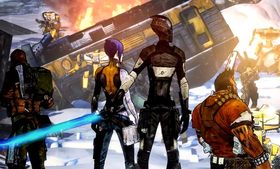 The Steam database contains references to Borderlands 2: Commander Lilith & The Fight For Sanctuary. This confirms that a new DLC is planned for the second part of the Gearbox Software's FPS series.